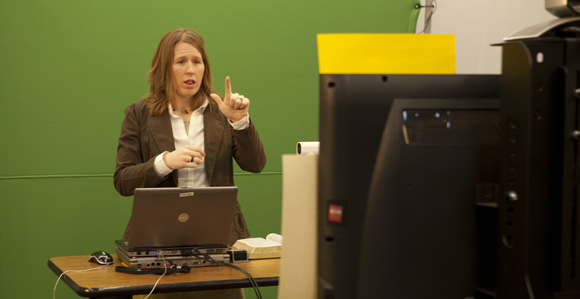 At the same site in Salt Lake City, Utah, where seminary was first held 100 years ago, ASL seminary classes are providing gospel instruction to Deaf teens across the United States.

“Many Deaf youth often think that they are the only Deaf LDS members in the world. These youth are thrilled to have others to chat with and to [be able to] forge friendships with other members of the Church.” —Nathan Van De Graaff, coordinator for ASL Seminary

One hundred years ago, in a building adjacent to Granite High School in Salt Lake City, Utah, USA, Thomas J. Yates served as the teacher of the first seminary class in the Church, a revolutionary undertaking for the time. Today, a century later, much has changed—Granite High School has closed, for instance. But seminary classes are still held at the site where seminary was first offered in 1912—and they are as innovative as their early predecessors.

Here Nathan Van De Graaff serves as the coordinator for American Sign Language (ASL) seminary. In this role, he teaches standard seminary curriculum in ASL to classes of up to nine students each—students who are participating from their homes across the United States.

The class is possible because of technology that became available to the Deaf community around 2000. Videophones, which are similar to today’s Web cameras, are designed for the Deaf to see and talk with each other using ASL. In 2004, Richard Snow, a former seminary principal over the Deaf classes based in Salt Lake City, began teaching seminary and institute courses to Deaf students one-on-one through videophones. And four years ago, in 2008, Seminaries and Institutes personnel discovered that the Church’s conferencing system has the ability to connect to videophones not just one-to-one, but also to several simultaneously. A new teaching approach was born.

Seminaries and Institutes tested the abilities of the technology through several pilot ASL institute courses, and in 2011, they received approval to teach the ASL seminary classes. “Many people were involved in the process,” Brother Van De Graaff said, “and because of their dedication and commitment, we were able to succeed in establishing the classes.”

Today, students from Arizona, California, Florida, Georgia, Idaho, Illinois, Oregon, Texas, Utah, and Washington participate in the classes. Using bridge technology, each student’s IP address from their videophones is connected to the videophones of all the others in the class. Once the whole class is connected, the instructor proceeds to teach.

Brother Van De Graaff and a part-time instructor, Emmalee Christensen, teach in ASL from two “studios” inside the Granite seminary building. The instructor signs to his or her class and, using a TV monitor, he or she can see each student in a grid of windows on the screen. (Students’ TV screens show this same grid.) “We want to make sure that the students are able to see us as well as we can see them,” Brother Van De Graaff explained.

Although the ASL seminary class is just one of several options Deaf and hard-of-hearing students have for participating in seminary—many also attend their local classes with an interpreter or participate in home study—it’s a setup that so far, has worked well, said John Weaver, manager of adaptive programs for Seminaries and Institutes.

“Students and teachers see and interact with each other like they do in a traditional classroom,” said Brother Weaver. “They have assignments to collaborate. There are lively class discussions that take place. We’ve tried really hard to make it as realistic a classroom experience as possible. It’s turned out to be a wonderful thing.”

It’s the windows-within-a-screen element that limits class size; experimentation has shown that for students and instructors to be able to see each other well, no more than eight or nine windows can appear on the screen. However, the small class size is compensated for by the two studios facilitating several classes—both seminary and institute—each day, allowing many teens and young adults to participate. Each class lasts between 60 and 90 minutes and is held two to three times a week.

“We’ve established these classes just like any other seminary and institute class, where we have a scheduled time the classes are offered,” Brother Van De Graaff said. “We post this schedule online and ask that the students register online. Classes are set up on mountain time, which means that someone in Georgia would be attending class two hours ahead of our time. These students make huge sacrifices to participate.”

Rachel Enggas, 17, of Illinois, USA, who has been participating in the class since her freshman year in 2009 (it was then a pilot program), is one of them. Class takes place from 5:30 p.m. to 7:00 p.m. local time and can often go longer when she, her teacher, and her classmates stay on after class to discuss the lessons and chat with each other. That time commitment sometimes means that Rachel misses volleyball practice, arrives late for play rehearsals, and eats dinner in the car on her way to other activities. But they’re sacrifices Rachel said she’s glad to make because of the benefits she finds there.

“I have never experienced gospel instruction like this before,” Rachel said. “Seminary is different than Sunday meetings because I can communicate and understand better. Deaf seminary helps my testimony grow and helps me to stand up more strongly for my beliefs.

“Seminary has helped me realize so many things,” Rachel continued. “I don’t have to be afraid of people. I know myself better, and I deal better with everyday life. Seminary is a reminder of why I have to stay strong.”

One of the strengths of the setup, Brother Van De Graaff said, is that students are able to see not only the teacher but each other as well.

“Many Deaf youth often think that they are the only Deaf LDS members in the world,” Brother Van De Graaff said. “These youth are thrilled to have others to chat with and to [be able to] forge friendships with other members of the Church.”

At the school for the Deaf an hour away from his home, Mackenzie Moosman, 16, of Idaho, USA, would be one of only a couple of students who are Latter-day Saints. And at Church, when he is with other LDS youth, he is the only person who is Deaf. But in the ASL seminary class, he said, he can be with teens who are, like him, LDS and Deaf.

“I really enjoy my teacher and my classmates,” Mackenzie said. “When I was in the hearing seminary, I was in the same room with classmates but felt alone because I could not talk to anyone without an interpreter. In the ASL seminary, I like that I can sign and not be the only one signing. Even though I cannot shake hands or be in the same room with them, I can see them, and I can communicate by myself.”

Of course, Mackenzie recognizes that the social aspects of seminary are not the sole reason behind the class. “Seminary is helping strengthen my testimony because I have to share spiritual thoughts, memorize scriptures, and learn the gospel,” he said.

He also notes that participation in class activities has become more meaningful for him in the ASL class. “I am grateful for the opportunity I have to be involved with other Deaf students and share and learn the gospel in my own language,” he said.

Students’ hearing the gospel taught in their “own tongue” (D&C 90:11) adds power and meaning to the experience for several reasons, Brother Van De Graaff said.

Brother Van De Graaff, who himself is Deaf, knows how important it is for Deaf teens to have the opportunity to participate in seminary. During his own youth, he attended a high school that was about an hour’s drive from his home because it was the only one that served the Deaf in the region. Because of that commute, he participated in home-study seminary for the first two years of high school with a “wonderful and patient teacher” who met with him each Sunday to review what he had done in his home study workbooks. “It was a very valuable time for me,” he remembered.

During his last two years of seminary, Brother Van De Graaff participated in early-morning seminary, which, since he did not have an interpreter, was “more difficult.” Although he appreciated the friendship of peers and instructors “who did their best to accommodate” him, he said he “missed out on a lot of information.”

But because he had seminary, he said, he has been blessed with “many wonderful experiences and spiritual benefits,” including serving a mission and remaining active in the Church. And now, because of technology, more Deaf students are benefitting from direct seminary instruction for the Deaf in ways that have not been available before.

“Seminary matters!” Brother Van De Graaff said. “With the ongoing influx of evil that is occurring around us every day and an increase in peers who are becoming more vocal about their beliefs or a desire to choose the wrong, it’s very important that the youth have a safe place where they can go and learn. Not only do they learn about the gospel, but they also are able to participate in a healthy and uplifting environment. I believe these classes will increase the commitment of the youth to Heavenly Father and their desire to go on missions, marry in the temple, and strive to be faithful members of the Savior’s Church.

“Our purpose is to help youth and young adults understand and rely on the teachings and Atonement of Jesus Christ; qualify for the blessings of the temple; and prepare themselves, their families, and others for eternal life with their Father in Heaven,” he added. “These classes have the potential to allow the Deaf youth to obtain this purpose and to help prepare them to become future leaders.”

Those things, said Mackenzie, are exactly what he is learning in seminary. “Seminary is good for learning and having experiences,” he said. “It will help me to be a missionary and also to teach my children when I grow up and become a dad.”

“It is a wonderful feeling to know that we can be part of this amazing location,” Brother Van De Graaff added. “Just think that 100 years ago a small group of high school students came here every day to be enriched in the gospel, and today, we have classes where we are reaching out to people all over the United States to enrich their lives with the gospel.”

Rachel recognizes that legacy of seminary. “I’m glad that I’m a part of the 100-year anniversary,” she said. “ASL seminary students are proud to be pioneers at the same site where the first seminary was established.”