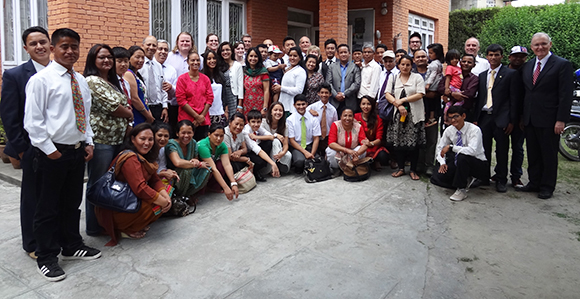 Members of the Kathmandu Branch stand and pose for a picture after hearing from Elder Randy D. Funk, a Seventy and member of the Asia Area Presidency.

“I think that was a wonderful thing, to let them know that the Church cares about them, people care about them. I think it was huge.” —Elder Jim Valentine, humanitarian missionary in Nepal

People around the world have expressed concern for the residents of Nepal following the country’s destructive earthquakes, and many relief organizations have provided assistance.

Elder Randy D. Funk, a member of the Asia Area Presidency, and President Peter E. Sackley and Sister Kelly Sackley from the India New Delhi Mission carried the Church’s love and concern to Latter-day Saints and others in Nepal over the May 15 weekend. They were joined by Elder Jim Valentine and Sister Chris Valentine, who had been serving in Nepal as humanitarian missionaries until their evacuation to Thailand a few days after the April 25 quake.

The group met with several of the Church’s humanitarian partner organizations to survey damage, assess the status of relief efforts, evaluate rebuilding needs, and convey their love and respect for the people of Nepal. For the Valentines, the return visit brought poignant memories of the earthquake, both good and bad.

Sister Valentine recalled her harrowing experience, which came after she had left Church services to prepare food for a special “missionary dinner” for those preparing to serve missions for the Church outside of Nepal.

“It hits. I have the choice to go down the stairs, out an outdoor escape, or under the table,” she said. “I chose to run down the stairs. Things were flying off the walls. Plaster, tiles, and glass were flying. I made it to a rail and watched a young lady get thrown from one landing to another. … Holding the rail, I made it to the bottom of the stairs as quickly as possible.”

The Valentines also recounted their experience after returning to where Church members had gathered after leaving the meetinghouse, where they found them crouching on the grounds outside. With violent aftershocks occurring every few minutes, it was difficult to stand. The youth started singing “The Spirit of God,” while neighbors in the area mingled with them.

“One woman just put her hand on my shoulder—sharing comfort,” Sister Valentine said. The couple remembered the branch leaders pulling out their phones to quickly determine the status of missing Church members.

The Church leaders were able to survey devastation in the hard-hit areas of Bhaktapur and Durbar Square. In addition to the “Great Quake” on April 25, a second major quake of 7.4 on the Richter scale occurred on May 12, causing additional damage and loss of life.

On Saturday (the Sabbath in Nepal), the group met with the branch council to discuss members’ needs. Then at sacrament meeting the Valentines bore their testimonies, followed by President and Sister Sackley.

In his remarks, Elder Funk reminded the congregation of the earthquakes and other devastations that had accompanied Christ’s crucifixion. He described the scene, as recorded in the Book of Mormon, where a resurrected Christ appeared to the people and stretched forth His hands, saying, “I am the light and the life of the world.” Elder Funk then said, “The people were able to have hope despite the devastation that surrounded them as they looked up to the ‘light and life of the world,’ Jesus Christ. Now, as you face great damage to your homes and livelihoods, you can also have hope and be happy as you look to the ‘light and life of the world,’ even Jesus Christ.”

“[Church members] were really uplifted by that,” Elder Valentine said. “I think that was a wonderful thing, to let them know that the Church cares about them, people care about them. I think it was huge.”

During Sunday School, Elder Funk held an open discussion to hear members’ stories and updates on the impact of the earthquake in their lives. When asked about their homes, the elders quorum president responded, “Though we have lost our homes, no one was hurt, so we are happy.” He continued, “We have really been blessed and guided as we’ve followed the Spirit.”

Following the Spirit was a common theme among Church members. Ajay Shrestha, a young science teacher and leader in the Church, told of his experience the day of the quake. He had left church early to pick up his aunt. She had plans to go to a museum in Patan and wanted him to accompany her. However, he remembered the commandment to keep the Sabbath day holy, so the museum trip was cancelled. After the earthquake, he had a chance to see the Patan area and discovered the museum had collapsed. Ajay felt his life and his aunt’s life had been spared because he had listened to the Spirit.

From this trip and ongoing work with humanitarian partners, the Church will continue providing assistance to the local branch, as well as many others in Nepal. A great deal of effort is still needed to provide relief as the season’s monsoon rains begin. Local Church members, however, are in good spirits and are resilient and faithful.