Arizona Mother of the Year Teaches with Love

“Teaching taught me that you have to love children. They can see that even though you’re making a lot of mistakes that you love them.” — Judy Nelson Ward

Judy Nelson Ward learned to love teaching children at age 14, when she was called as the Primary pianist in her Twin Falls, Idaho, ward. This mother of seven, who now lives in Mesa, Arizona, was named by America Mothers, Inc. as the “mother of the year” for her state.

“Teaching taught me that you have to love children,” Sister Ward told the Church News. “They can see that even though you’re making a lot of mistakes that you love them.”

Her degree from Utah State University in elementary education and minor in fine arts helped prepare her for motherhood.

“To be a mother you have to be a well-rounded person,” Sister Ward said. “And that kept me well-rounded.”

Other children also benefited from her teaching. She and a friend began running a preschool in her home, first for her own children and then for others as well. Her house was never built to hold a preschool, and rearranging everything to accommodate a school twice a week required hard work from her whole family, but it eventually helped fund missions and college.

“We loved it because of the wonderful spirit these children bring,” she said.

Sister Ward was a teacher in the community as well. She taught adult literacy courses through Deseret Industries for many years.

“A wife came up to me after her husband completed the course and told me that her husband was singing the hymns for the first time in their whole married life,” she said. “It was such a wonderful thing to do.”

Sister Ward knew that gospel principles, learned at home and Church, rather than school, would make her children happy. 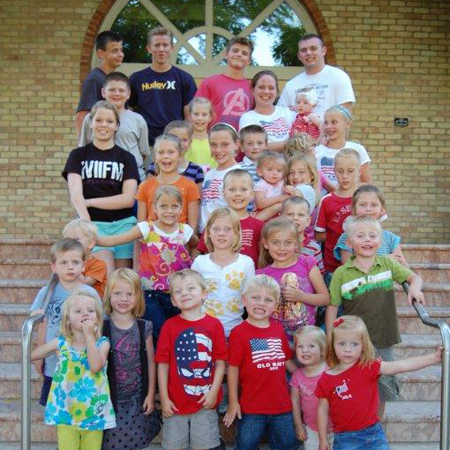 The 34 grandchildren of Judy Nelson Ward, the Arizona “mother of the year.” She says the key to mothering is to teach with love. Photo courtesy of Judy Ward.

“The only thing that keeps them is your testimony, your relationship with Heavenly Father, loving your children, and working together with your husband,” she said.

She learned about motherhood from her own mother, whose 92nd birthday fell on the same day as the mother of the year gala.

“I’m the child who came from school and said, ‘I have to have 60 chocolate éclairs tomorrow,’ and she would do it,” she said with a laugh.

Sister Ward was a little embarrassed to be named mother of the year, but she is grateful for the chance to “stand up for motherhood.”

In her opinion, motherhood does not end when children get married, and she disagrees with some women who tell mothers that they need something outside the home in order to be “fulfilled.”

“I think if you don’t feel fulfilled, you better get busy and be,” she said. “Sometimes you think that you get married and live happily ever after, and you do, but it’s hard work.”

She has been grateful for how her talents in teaching and the arts have helped her as a mother.

Yet the greatest lesson Sister Ward has learned through teaching is to have unconditional love for her children, and that has helped her to do even the difficult things.

“We went for 25 years straight of Little League,” she said, noting that she does not like baseball.