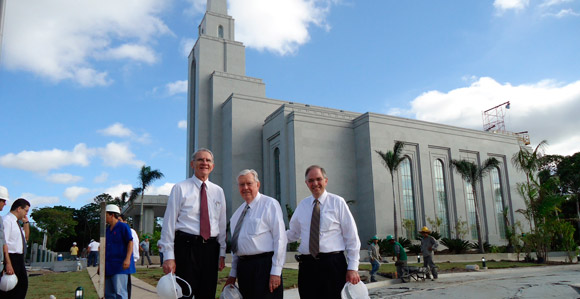 From January 20 to 29, 2012, Elder M. Russell Ballard and Elder Neil L. Andersen of the Quorum of the Twelve Apostles, along with Elder Jay E. Jensen of the Presidency of the Seventy, visited Church members in Brazil.

The Brethren were accompanied by their wives, as well as by the Brazil Area Presidency—Elder Claudio R. M. Costa, Elder Carlos A. Godoy, and Elder Jairo Mazzagardi of the Seventy— and other Area Seventies.

Speaking to young single adults in São Paulo, Elder Ballard recalled prophecies concerning the beginning and growth of the Church in South America made in the beginning of the twentieth century by his grandfather, Elder Melvin J. Ballard (1873–1939), who was a member of the Quorum of the Twelve Apostles assigned to live in Buenos Aires, Argentina.

In São Paulo, Elder Ballard urged the youth to stay away from pornography in all its forms, explaining that spiritual strength and power come from complete righteousness and virtue. In his final remarks he challenged everyone to help an inactive friend to return to full activity.

While in Sorocaba, Elder Jensen challenged all families in attendance to study the Family Guidebook the same way they study the scriptures.

Later, in Recife, he prompted members to build their families on the foundation of righteous things. “When a blind man was taken to Christ, He healed him,” Elder Jensen said. “The question should therefore be asked, ‘What healed the blind man?’ The answer is, ‘The touch of the Master’s hand.’ May we allow the Master to touch our lives.”

Elder Andersen echoed that message in Campinas, where he told members, “Our choices are not between richness and poverty, or between fame and obscurity. Our choice is between good and evil.”

In addition to the above-mentioned cities, Church leaders also visited Manaus, where a temple is being constructed. The Brethren surveyed the granite exterior and the temple’s interior, including carved wood details, carpets, and ceilings.