Contributed By By the Philippines Area news committee 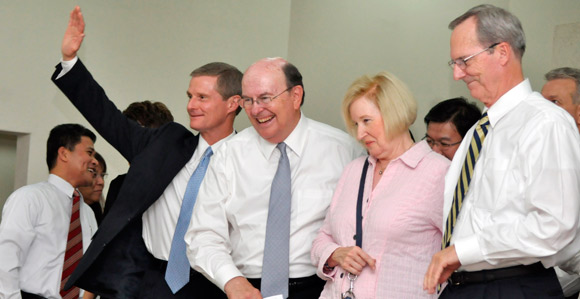 For ten days in August and September, Elder Bednar and Elder Cook of the Quorum of the Twelve Apostles visited cities throughout the Philippines to meet with leaders, members, and missionaries.

“Your righteousness is needed, and this nation needs to be stronger. There will be an impact as a result of the Church’s strength in the Philippines that will bless people all over Asia.” —Elder Quentin L. Cook of the Quorum of the Twelve Apostles

Elders David A. Bednar and Quentin L. Cook of the Quorum of the Twelve Apostles, Elder Tad R. Callister of the Presidency of the Seventy, and Bishop Dean M. Davies of the Presiding Bishopric visited the Philippines Area from August 24 to September 2, 2012. Their wives—Susan Bednar, Mary Cook, Kathryn Callister, and Darla Davies—accompanied them on the visit. Members of the Philippines Area Presidency, Elders Michael John U. Teh, Brent H. Nielson, and Ian S. Ardern, also assisted with the various meetings.

Elder Bednar began his visit in Laguna, where many who attended a special young single adult meeting at the San Pablo Stake Center were invited to ask questions in order to assist them with their concerns and needs. Elder Bednar explained, “The Savior used questions as one of His primary teaching tools. If we strive to ask inspired and effective questions as we ponder and pray, you and I can engage in a learning process that enables us to receive inspiration and find our own answers from the Holy Ghost.”

Moselle Tobias, who was in attendance, took that lesson to heart: “I came to the meeting with a question,” she said. “Although I did not get an opportunity to ask it, I still received an answer from the Holy Ghost.”

The following day, Elder Bednar, accompanied by Bishop Davies and Elder Teh, presided over a priesthood leadership conference and a mission meeting in San Pablo. Elder Cook, Elder Callister, and Elder Ardern met with priesthood leaders from four stakes and eight districts and with the full-time missionaries in Naga.

Attendees to these meetings came away feeling spiritually strengthened and uplifted and motivated to change.

“I felt the Spirit and I have learned many things that I can bring home and share with the leaders in our branch, especially what was taught on how we should love and reach out to those members who are struggling in their faith,” said President Dante Osila of the Bololo Branch.

On Sunday, the visiting Apostles met separately with Latter-day Saints at stake meetings in Cabuyao and Legazpi.

The chapel and cultural halls of the Legazpi Stake Center were packed with members, who also filled two overflow rooms, which had video feed. Elder Cook taught, “Do not let your doubts disturb your faith.”

He went on to emphasize the importance of husbands and wives being equal partners in marriage as taught by “The Family: A Proclamation to the World.”

At the conclusion of the meeting, Elder Cook greeted the members who waited for him on his way out.

Members and missionaries in Iloilo, on Panay Island, traveled as much as five hours by boat and bus to attend meetings where Elder Bednar gave instruction on strengthening their faith in Jesus Christ and assisting others to come unto Christ.

Sister Manguil, a full-time missionary serving in the Philippines Iloilo Mission, stated what she learned: “We are here to teach the gospel of Jesus Christ, but we should always remember that the true teacher is the Holy Ghost, who through proper invitation can dwell in every house we teach. So teach with clarity, conviction, power, and love. Help our investigators and less-active members to act and not to be acted upon. Help them exercise their faith by doing all these things, giving all our best as stated in Alma 26:27. [God] will give unto us success.”

Following the young single adult meeting, Cyrelle Gomez Constantino of the Molo 2nd Ward summarized his insights: “Faith in the Lord Jesus Christ will help us use our agency wisely. Studying the scriptures and acting in accordance to His teachings will decrease our fear. Everything that we need in this life, especially our unanswered questions, will be answered by the gospel. Happiness can be found by helping others find their happiness.”

Traveling to Olongapo City, Elder Bednar met with another group of missionaries and reminded them of their opportunity and responsibility to bless the Philippine nation and families of the earth by proclaiming the gospel and inviting all to receive by proper authority the ordinances of salvation.

“You’re a group that is going to mean so much in the Lord’s kingdom,” Elder Cook told the local young adults. “Your righteousness is needed, and this nation needs to be stronger. There will be an impact as a result of the Church’s strength in the Philippines that will bless people all over Asia.”

To accomplish that end, he said, members need to focus on what is most important, conquer doubts, exercise faith, and marry in the temple.

During the priesthood leadership training, Elder Cook and Bishop Davies emphasized that the home is the key to strengthening the rising generation.

“The timing of the teachings of the principles and scripture thoughts they shared was of [great] importance,” Iligan Philippines Stake President Carlo V. Crisanto said. “Surely those principles are what we need today. . . . Of all the callings we have, the most important is in the family.”

The following day, Elder Cook visited the Pasay Philippines Stake, which he organized and created in 1998. The special stake meeting was a sort of reunion for Elder Cook, who served from August 1996 to August 1998 as a member of the Philippines Area Presidency.

In his talk, Elder Cook emphasized the importance of families, of husband and wife being equal partners. He also asked the members to support the efforts of the Philippines Area Presidency in reaching out to less-active members.

Fourteen-year-old Gabriel Tongco from Manila First Ward shared his feelings about the apostolic visit: “It [was] my first time to shake hands with and hear an Apostle speak in person,” he said. “I felt the Spirit as Elder Cook was speaking. . . . I felt the truthfulness of what he was saying.”

Two other important events that took place during Elder Bednar and Elder Cook’s visit to the Philippines included a meeting with two Philippine senators and a cultural event highlighting the local youth.

Elder Cook and Elder Michael John U. Teh of the Area Presidency met with Senators Tito Sotto III and Gregorio Honasan on Wednesday, August 29, at the Philippine Senate, where Elder Cook expressed gratitude for the Church’s presence in the country and presented the senators with several tokens: a miniature Christus, a framed copy of “The Family: A Proclamation to the World,” and a CD celebrating 100 years of the Mormon Tabernacle Choir.

Senator Honasan mentioned the Church’s stance on strengthening the family and promoting good values: “We thank good citizens, like [your members], who are supporting good causes,” he said. “We want a promising future for our children, thus the need to work together for a common good.”

That same evening, youth from various stakes in metro Manila participated in a cultural presentation of song and dance for the visiting General Authorities. Both Apostles thanked the members for their lively performances and commended them for their faithfulness. Elder Bednar invited the youth to live their life as an example to others of what a testimony of our Savior Jesus Christ can help us to become.