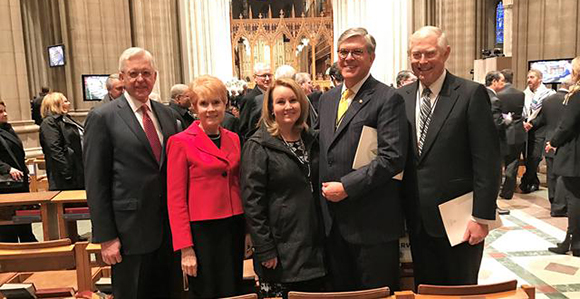 Elder D. Todd Christofferson of the Quorum of the Twelve Apostles offered a prayer asking God to bless President Trump and all the nation's leaders on Saturday during the presidential inaugural prayer service at the National Cathedral in Washington, D.C.

“There was a wide variety of faiths represented, and it was an honor for us to be included,” said Elder Christofferson. “I felt the Church was recognized and honored and that the prayers for the nation were heartfelt—that our leaders would be wise and Spirit-guided. It was a wonderful unity of spirit, unity in behalf of our leadership and for the good of the country.”

A day earlier, he attended the presidential inauguration with Elder Gary E. Stevenson of the Quorum of the Twelve Apostles, and they watched as the Mormon Tabernacle Choir sang “America the Beautiful” (see related story). 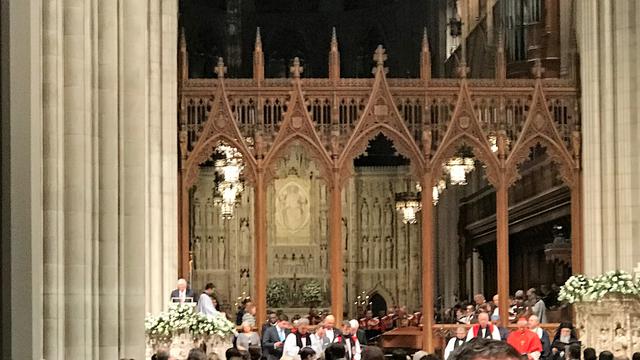 The performance by the ambassadors for the Church was broadcast internationally and was seen by an estimated 800,000 people on the west lawn of the U.S. Capitol Building and the National Mall.

After Justice Clarence Thomas of the Supreme Court administered the oath to Vice President Mike Pence, the choir stood in the center of the stands above the podium and sang “America the Beautiful.”

Then Chief Justice John Roberts administered the oath of the office of the president to Donald Trump.

The 2016 presidential election was notably divisive, but the choir hoped its contribution would help to bind up the wounds.

Music director Mack Wilberg arranged the version of “America the Beautiful” sung by the choir. He and choir president Ron Jarrett called music a universal language that promotes healing.

The choir has 360 members, and 300 applied to make the trip. Organizers randomly selected 215 for the choir's seventh presidential inaugural performance. They were accompanied by “The President’s Own” Marine Corps band.

Elder Christofferson’s prayer was a replica of one given 12 years ago to the day at the second inaugural prayer service for President George W. Bush. He inserted President Trump’s name and changed the words you and your to Thee and Thy.

“O Lord, our Heavenly Father, whose glory is in all the world,” Elder Christofferson prayed. “We commend this nation to Thy merciful care, that, being guarded by thy Providence, we may dwell secure in Thy peace.

“Grant to Donald John Trump, president of the United States, and to all in authority Thy grace and favor,” he continued. “Give them wisdom and strength to know and to do Thy will. Embue them with Thy heavenly gifts. Fill them with the love of truth and righteousness, and make them ever mindful of their calling to serve this people in Thy fear, through Jesus Christ, our Lord, who lives and reigns with Thee and the Holy Spirit, one God, world without end.”

The Mormon Tabernacle Choir performs “America the Beautiful” for the inauguration of Donald J. Trump, 45th president of the United States, on January 20, 2017.