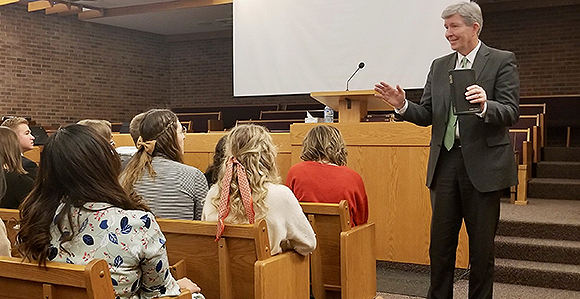 “I keep learning that this is not our work; it’s the work of a loving Heavenly Father who cares about all of His children and the work carried out by His Only Begotten Son, even the Lord Jesus Christ.” —Elder S. Gifford Nielsen of the Seventy

While conducting a mission tour on the Tongan island of Ha‘apai several years ago, Elder S. Gifford Nielsen asked missionaries there what recent general conference talk had touched them. One young elder cited how a talk mentioning challenges in life had resonated with him.

Arranging a private one-on-one interview later in the day, the General Authority Seventy asked the elder to share more of why that certain talk was meaningful. “That’s who I was before I came on my mission, and then my good stake president saved me and my family,” came the response.

A little more probing revealed the missionary was from a stake in the United States, a stake where Elder Nielsen previously had been a part of the process of interviewing individuals and seeking a spiritual confirmation in calling a new stake president.

“Tears were flowing,” recalled Elder Nielsen, who currently serves as a Missionary Department assistant executive director. “I said, ‘You and I are on this little island in Tonga, and I had an inspired thought to interview you. Now you’re telling me the story of how your stake president saved you? How interesting that I was one of the General Authorities who was there when your stake president was called. That was a sweet experience, because I know exactly how he was called, and now I know why.”

“I keep learning that this is not our work; it’s the work of a loving Heavenly Father who cares about all of His children and the work carried out by His Only Begotten Son, even the Lord Jesus Christ. We work through His apostles and prophets. When we have our hearts open, amazing things happen.” 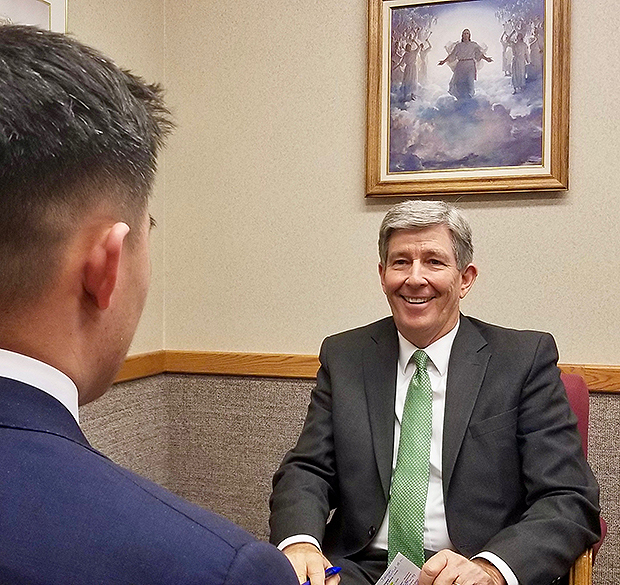 A Grateful Witness to Miracles

Said Sister Corianne Snyder of the Calgary mission, “The mission tour helped me feel the Spirit and have a deeper conversion to Christ and to understand what my purpose is here in this specific mission and at this specific time.”

Elder Robert Perkinson of the Tennessee Nashville Mission has experienced two mission tours. “I felt both times the great love that the visiting authority represents from the First Presidency and the Quorum of the Twelve Apostles, the Seventies, and the Church in general—how they want us to know we’re loved for being out here serving and to know what their mindset is at and what goals they want us to have.”

Elder Fabio Avanzo of the Nashville mission added how meaningful it was to be taught by General Authorities in mission tours, since he met only one growing up in his native Venezuela: “I got to experience how the Spirit was in the room, how General Authorities could talk to us, and how they testified about missionary work and our Savior, Jesus Christ. And I’ve seen how they act through the power of the Holy Ghost.”

Having spent a decade as a General Authority Seventy and the past several years as executive director of the Missionary Department, Elder Brent H. Nielson cites two memorable mission-tour experiences with missionaries.

One was in Davao, Philippines, where, because of security and safety issues, all the missionaries assigned there are Filipino. One elder posed a tender question during a Q&A session.

“‘Elder Nielson, was I not valiant in the pre-existence? Is that why I was sent to the Philippines to live?’” recalled Elder Nielson, noting the missionary was aware of all the past and present Church events and living conditions in the United States. “He wondered if maybe he wasn’t good in the pre-existence and that’s why he was sent to live in the Philippines—not as a missionary but at his birth.”

Elder Nielson called it one of the hardest questions he has ever faced. “I told him, ‘We don’t know all the answers about where we are born on earth, but the fact that you are here tells me that the Lord knew that in spite of difficult living conditions, that you would be faithful and valiant and you could do this.’” 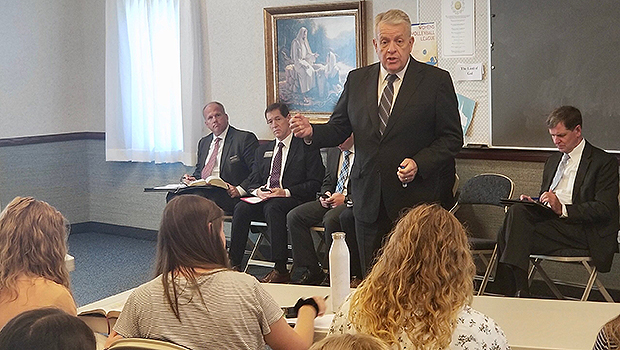 He also remembers a mission tour in New Zealand, where a Maori missionary asked if he could “hongi” with the visiting authority. A “hongi” is a traditional Maori greeting when two people face each other, touch their noses together, and breathe deeply as a gesture of unity.

“He showed me and said, ‘I need to take your spirit with me. I need this to be with me as I leave,’” said Elder Nielson, adding with a smile that “we obviously don’t ‘hongi’ in Idaho, . . . but that was one of those experiences where I just really connected with this missionary in his own culture.”

As much as the visiting authorities and their wives are trying to help missionaries learn and understand, the missionaries in turn leave quite an impression on the visitors.

“I have the greatest respect for missionaries and their leaders,” said Sister Wendy Nielsen, Elder Nielsen’s wife. “I feel honored to visit any mission and work together with such dedicated and consecrated servants of the Lord. When I look into the eyes of a group of missionaries, my heart is filled with so much love for them as I realize how much the Savior loves them—which makes me cry—and I try to focus on the message the Lord wants me to share with them.”

Sister Marcia Nielson, wife to Elder Nielson, calls missionary work a brilliant plan. “Young adults who serve a mission learn incredible lessons, and it amazes me what mature and well-thought-out things missionaries share with us. While young adults throughout the world are engaged in accomplishing good things, missionaries are changing the world one convert at a time and changing their own lives for the better in the process. I’m a grateful witness to this miracle. When a mission tour is over, I always want more time to be with the missionaries.”

A Source of Support for Mission Leaders

Mission tours are as much to benefit the mission president and his companion (wife), and the visiting authorities conducting these tours make conscious efforts to strengthen and edify the mission leadership couple.

“It’s just a difficult assignment—it’s like jumping on a moving train that goes 90 mph for three years, and it’s never-ending,” said Elder Nielson of the service given by mission presidents and their companions. “It’s just nice to have other adults show up and talk to them and let them know they’re doing OK.”

Elder Craig C. Christensen recalls the first mission tour—the one the current General Authority Seventy experienced while presiding over a Mexico City mission in 1995. The first-year mission president looked forward to interactions with the visiting authority, seeking insights on how to work with the leaders and members of the many stakes within his mission boundaries.

“Although a mission president has counselors, many times they don’t understand all the ramifications of everything that’s going on,” said Elder Christensen, who now presides over the Utah Area. “So I was anxious just to have someone there to talk to, to ask questions, to get advice from.”

The visiting General Authority spent four days with him and his wife, Sister Debbie Christensen—enough time “that we were able to feel like we were on the right track—a reaffirmation,” he said, expressing the impact of the one-on-one interactions and counseling together.

“And we got to see him and his wife teach missionaries,” he added. “General Authorities teach differently than mission presidents, but you got to see what the focus was. You got to feel the Spirit with them. It was quite a positive experience for us.”

During last fall’s mission tour in the Tennessee Nashville Mission, President Rhys A. Weaver and Sister Pamela Weaver traveled between meetings with Elder and Sister Nielson, as well as Elder James R. Rasband and Sister Mary Rasband, who shadowed the Nielsons as a new General Authority Seventy and wife. 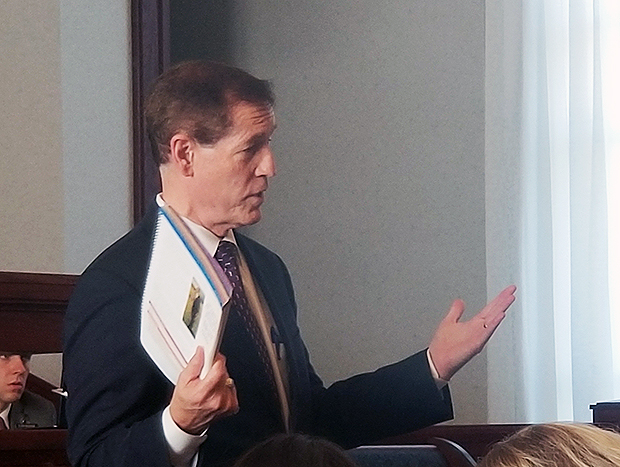 President Rhys A. Weaver of the Tennessee Nashville Mission speaks to his missionaries during a September 19, 2019, mission tour meeting in Brentwood, Tennessee. Photo by Scott Taylor.

“The Nielsons and Rasbands spent loving and instructive time with us in the evenings,” Sister Weaver said. “From the moment they arrived, they tried to put us at ease, as this was our first mission tour. I honestly felt lifted, inspired, and directed by the tour. We rode all together in a large van to our second conference, and we all laughed and shared stories and enjoyed getting to know one another.” 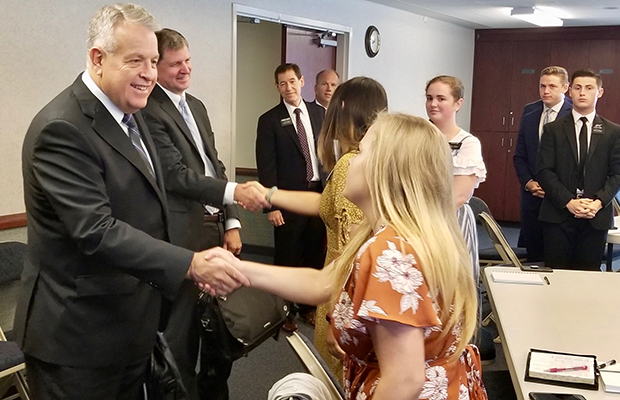 Added President Weaver, appreciative as a first-year mission president: “Elder and Sister Nielson built us up to our missionaries, adding their personal support to our role as their mission leaders. They demonstrated teaching techniques and personal interactions with our missionaries. They lifted us by example and sincere love and support. We were privileged to learn from them and be with them as they ministered to us personally and to our missionaries.”

For President Stephen A. Keung and Sister Cindy Keung of the Canada Calgary Mission, Elder and Sister Nielsen proved to be an exemplary “companionship” for both them and their missionaries. “They taught effectively together, showed us how to effectively ‘companion study’ together, and were inspired examples of teaching by the Spirit,” President Keung said. “Their love for each other stood out the most—that could be seen not just by their love and affection for each other but also by the way they worked together. Elder Nielsen always sought for and found joy in Sister Nielsen’s inspiring insight and thoughts.” 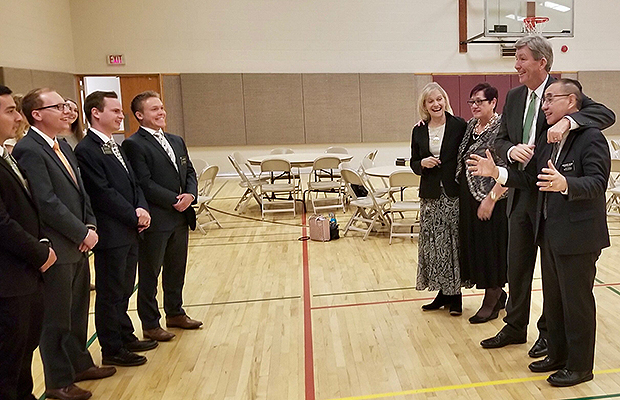 Elder S. Gifford Nielsen puts his arm around the shoulder of Canada Calgary Mission president Stephen A. Keung in front of missionaries who had welcomed them in song to a series of mission tour meetings on October 31, 2019, in Calgary, Alberta, Canada. Photo by Scott Taylor.

Said Elder Nielsen: “One of the most beautiful things about our mission tours is to go in and connect with the mission leaders. We love the president and his wife. We really enjoy spending time with them, talking to them, caring about them, praying with them, and putting our arms around them. We know the key to a mission really is the leadership of the mission president and his wife. . . .

“And after a mission tour, you feel like you have two more best friends. You stay connected. They will keep telling you about miracles that have happened in their lives and with their missionaries.” 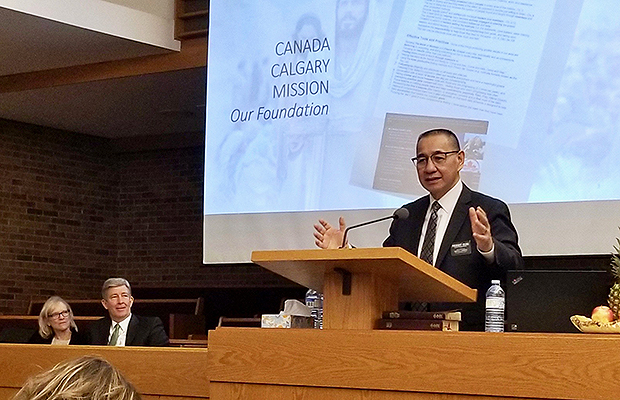 President Stephen A. Keung of the Canada Calgary Mission speaks to his missionaries during a mission tour meeting on October 31, 2019, in Calgary, Canada, while Sister Wendy Nielsen and Elder S. Gifford Nielsen look on.
Photo by Scott Taylor.