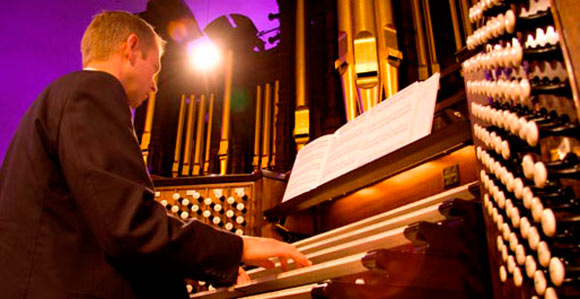 Andrew Unsworth dreamed his whole life of becoming a Tabernacle organist, and since being appointed as the 13th full-time organist to serve on Temple Square in July 2007, he hasn’t looked back.

“There are times when I’ll play the second half of a choir rehearsal, so the choir is all there, the director is there, and I walk out and see everyone standing there and I think, ‘Holy cow. What am I doing?’ I still pinch myself that I get to do this.” —Andrew Unsworth, Tabernacle organist

Part one of a three-part series.

Andrew Unsworth, one of the three full-time organists on Temple Square, was born into a musical family, so it isn’t surprising that he would become a professional musician. The surprising part may be that as a child he grew up listening to and playing along with organ records—at his own request.

The organ isn’t the first instrument a typical child might choose to dream of playing. However, from the first time he heard the low bass sounds of the organ, he knew exactly what instrument he wanted to play.

Because playing the organ requires using hands and feet, Brother Unsworth played piano until he was tall enough to reach the pedals. “At 14 I switched over to the organ and haven’t looked back since,” he said.

After studying organ performance and pedagogy as an undergraduate student at Brigham Young University in Provo, Utah, USA, Brother Unsworth felt that he faced a bit of a career crisis.

“As a kid I would watch the Tabernacle organists play,” he said. “I envied the instrument and I dreamed of actually someday working here on Temple Square, but there are only three full-time organists here and I figured that’s not the kind of thing you can bank your life and career on.”

Realizing there might not be many opportunities for organ performance, he went to graduate school and earned a PhD in music history from Duke University in North Carolina, USA, preparing to teach at the university level.

When Brother Unsworth learned that an organ performance position was open at the Catholic Church’s Cathedral of the Madeleine in Salt Lake City, Utah, USA, he applied and was appointed.

Finally able to seat his knowledge and training on the organ bench professionally, Brother Unsworth was able to “cut his teeth” as an organist. He learned how to play big services and accompany choirs on-the-job at the cathedral. 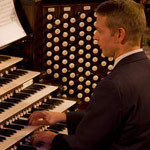 “I really enjoyed playing at Cathedral of the Madeleine,” Brother Unsworth said. “The instrument is very nice. The acoustics of the cathedral are in some ways ideal for organ. The music that the choir does—and that the organist is expected to play—is top rate; it’s amazing.”

Though he enjoyed his job with the cathedral and a brief stint later teaching at Stephen F. Austin State University in Texas, USA, he never forgot his dream of working on Temple Square.

“I had some spiritual experiences at the cathedral,” he said, “but I always felt a little bit torn. . . . While I admire and respect [everyone I associated with at the cathedral], I am a member of The Church of Jesus Christ of Latter-day Saints, and I wanted to be able to use my talents in the service of my own religion.”

After spending 30 years as a Tabernacle organist, John Longhurst, known especially for composing the music to “I Believe in Christ” (Hymns, no. 134) and for his role in acquiring the organ in the Conference Center, retired in 2007.

With a Tabernacle organist spot now open, Brother Unsworth was in the right place at the right time. After many interviews, playing tests, and composition sessions, he was appointed as the 13th full-time organist to serve on Temple Square, beginning his service in July 2007.

Performing with the Tabernacle Choir for the last three years, Brother Unsworth has continued his progression as an organist. He has most enjoyed the opportunity to learn from and play with the musicians he works with.

“The other organists are among the finest people and musicians that I know, and the other choir staff—the musical directors, the choir, and the orchestra members—are fantastic people. It’s a privilege to get to work with them,” he said.

The job on Temple Square offers many experiences, most of which have taken time to grow into. It isn’t easy to accompany the 360-member, world-renowned Mormon Tabernacle Choir, especially when they usually practice only once a week.

Brother Unsworth feels he is still becoming accustomed to the Tabernacle organ and its 11,623 pipes. He has also had to learn to play on the Conference Center’s 7,667-pipe organ.

“I’m still learning to play with [the Tabernacle] organ. Sometimes, I’m experimenting with the organ and I don’t get it quite right. I miss the one chance I have to get it right,” he said.

“When I was first appointed I didn’t sleep for a couple of days, primarily because I was thinking about what it would be like to play for general conference,” he said. “However, the first time I did it, I took comfort in the fact that the spirit of the meeting was so strong that it compensated for the jitters that I was feeling at the time.

“And since I’ve played conference a number of times since then, I take comfort in the fact that the Lord takes an interest in conference. He wants conference to go well. We work hard to prepare, but then we rely on the Lord to help see us through.”

The American Guild of Organists is a professional organization for organists in the United States. At the time of its founding in 1896 there were not many universities that offered degrees in music. Because of this, the guild offered the opportunity for its members to take examinations of their musical skills and earn certificates, demonstrating their abilities and competence to potential employers.

Many universities now offer degrees in music, but the guild still offers these exams for its members. As a member of the guild, Brother Unsworth hoped to demonstrate his ability and took the exams in June 2010 at the University of Utah.

The two-day exams, a comprehensive assessment of one’s musical abilities, test an organist’s performance abilities in transposition, improvisation, and harmonization. The exams also feature written facets, such as analysis, composition, and ear training.

“They were tough, so I was very pleased when I was notified in July that I passed, and not only had I passed, I won a couple of awards,” said Brother Unsworth.

“I was flabbergasted, to be honest,” Brother Unsworth said.

Brother Unsworth could not be happier performing his dream job and doesn’t plan to leave anytime soon. The job can be difficult at times, but the opportunity to play for the Mormon Tabernacle Choir has him counting his blessings.

“It’s thrilling,” he said. “There are times when I’ll play the second half of a choir rehearsal, so the choir is all there, the director is there, and I walk out and see everyone standing there and I think, ‘Holy cow. What am I doing?’ I still pinch myself that I get to do this.”