“And the Lame Shall Walk”: Church Partners with Prosthetic Company in Indonesia 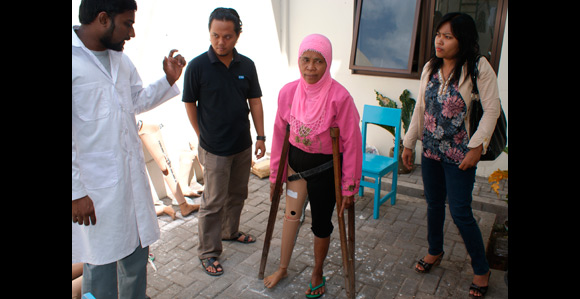 Sakthivel explains to Tumiyem and daughter Heni through interpreter Lilik Setiyawan the importance of walking on her new artificial leg at least two hours every day.

“I am excited to be able to walk by myself to care for my three-year-old daughter, Nita.” —Ruwet Pajahgan, born without feet

Yogjakarta, Indonesia, near the active volcano Mount Merapi, has had its share of tragedy. Periodic earthquakes and volcanic eruptions have at times brought terror and serious injuries to its residents. But two days in early August were all about healing for more than 100 people who have lost limbs through earthquake or accident or even congenital lack of limbs.

The Church of Jesus Christ of Latter-day Saints has partnered with Yayasan Peduli Tuna Daksa (the Jakarta Orthotics and Prosthetics Center—Limbs for Limbless) in Jakarta, Indonesia, in a program to provide artificial limbs for those who need them in the city of Yogjakarta and surrounding areas. The artificial limbs are manufactured by Yayasan professionals, and the project is funded by the Church and coordinated by welfare missionaries Russell and Eileen Healy.

On August 7, 2012, at the Mandiri Craft building in Yogjakarta, more than 50 patients were evaluated and measured for new artificial limbs. Expert technicians then made plaster casts of the stubs of their existing legs. These measurements and casts will be used in the production of their artificial legs. In one month, the technicians will return with the completed limbs.

Each patient received an identification number that tracks the initial examination through the measuring and casting process to fitting the limb and follow up. Each person can return for adjustments and additional modifications until the limb is perfectly suited to the recipient.

Martosibono, who came to be measured for a new leg accompanied by her son Abadi and her grandsons Ravi and Devan, was in a building during a 2006 earthquake. “The ceiling fell down and trapped me for a long time,” she explained. “My leg was damaged, and it had to be amputated.” Now, her new leg will bring her new hope.

“My father and mother carried me to school every day because I was born without any feet,” explained 30-year-old Ruwet Pajahgan. “I am excited to be able to walk by myself to care for my three-year-old daughter, Nita.

August 8 was spent fitting new artificial legs to more than 50 people who had been measured the previous month. Tender feelings were generated by the smiles of patients and their family members when a patient took first steps with the new limb. For all of them, life will never be the same.

Kemijo was a farmer before a motorcycle accident resulted in the loss of a leg. “I cannot be a farmer now,” he said, “but I want to be a farmer again if I can with my new leg. If that is not possible, I will learn to make handicrafts.” He looks toward the future with new optimism.

Tumiyem needed a limb because of a serious fall that occurred 20 years ago when she was taking a shower in an outdoor facility near her home. She was in the hospital for three months and had to have her leg amputated.

Sakthivel Kathirvel, the biomedical technician who heads up the project for Yayasan, is dedicated to his craft. His rapport with the disabled relaxes them and makes it possible for him to take the measurements and make the casts with little reluctance from his patients.

The Church of Jesus Christ of Latter-day Saints is pleased with the opportunity to cooperate with Yayasan Peduli Tuna Daksa to make it possible for the lame to walk.