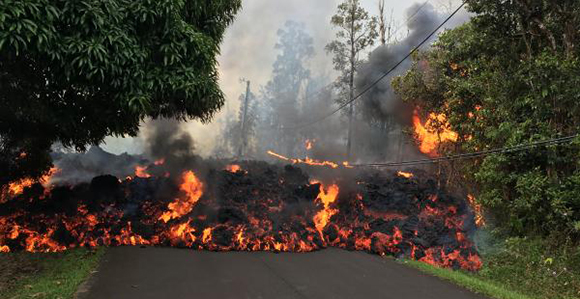 A lava flow moves on Makamae Street in Leilani Estates on May 6. Photo courtesy of U.S. Geological Survey.

Latter-day Saints are among the dozens of Hawaiians whose homes and business have been lost or threatened by the lava flow from the Kilauea volcano.

At least 35 structures have been destroyed—including the residence of one Mormon family.

All members and missionaries are safe—although 10 Mormon families living in affected areas are finding shelter with relatives and friends. There is no immediate concern for Church meetinghouses or properties, according to Church spokesman Daniel Woodruff.

Scores living in communities along the eastern side of Hawaii’s Big Island have evacuated.

But even residents whose properties are not in immediate danger are affected by the disaster. Rolling lava flows have destroyed or severely damaged power lines, roads, and water facilities. Meanwhile, a 6.9-magnitude earthquake struck May 4 and tremors continue to rattle the region.

“Many communities are being affected by having no water or electricity,” said President Erbe.

The fumes “make you feel light-headed; it burns your skin and eyes and makes you nauseated. It makes your life miserable.” 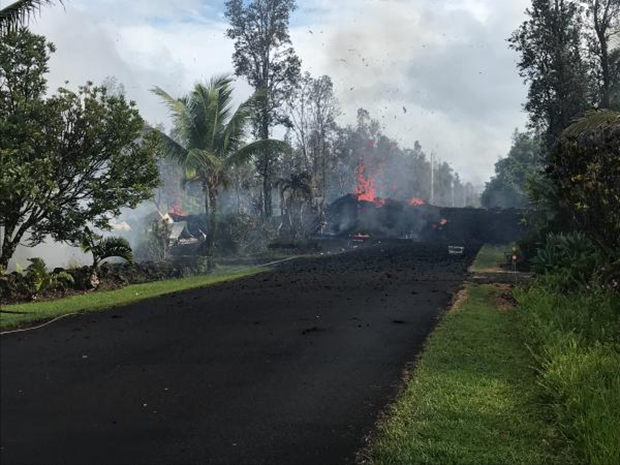 A volcano fissure from Kilauea on May 8. Lava on the road was approximately about 2 yards thick. Photo courtesy of U.S. Geological Survey.

The Kea’au Ward meetinghouse has sometimes doubled as a shelter, and local Latter-day Saints and their neighbors are stepping up to help wherever needed.

“The community has been tremendous,” said President Erbe. “A lot of people are sharing the Aloha spirit.”

Many residents living in impacted areas had to flee from their homes and had no time to gather even their most basic provisions. So Hilo stake members have donated clothing, shoes, food, and other essentials for folks sheltered at Red Cross facilities.

Stake-operated spreadsheets are identifying displaced people and matching them up with needed supplies. The ongoing disaster has left many on edge.

“What they need most is a friend and a hug,” said President Erbe.

Like his fellow residents across the Big Island, the local Church leader doesn’t know what Kilauea will do next. “Everything is uncertain.”

Hawaii Governor David Ige told CNN that the disaster has been a tough go for residents.

“There’s a sense that it’s Mother Nature,” he said. “The lava flow is unpredictable. It’s hard to determine which direction it will go. It starts and stops on a whim. That’s the uncertainty that residents are faced with.” 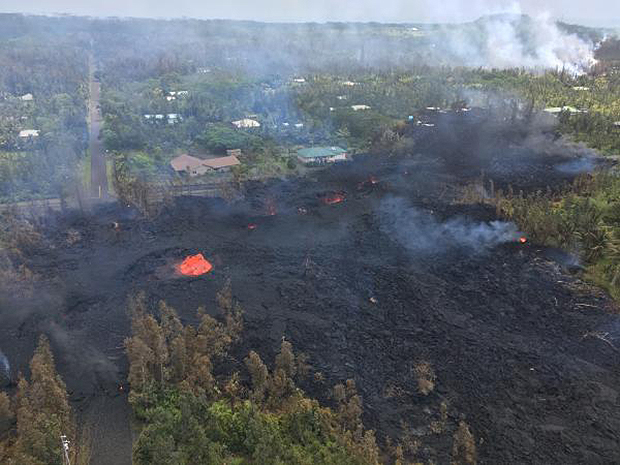 A short lava flow erupts from a volcano fissure from Kilauea on May 8. Photo courtesy of U.S. Geological Survey.