They say “close” only counts in horseshoes—and “almost” counts not at all in football. But two former Brigham Young University football stars agreed that the “almost” efforts of Sister Sheri Dew this past year in family history and temple work must count for a great deal.

A year ago, Sister Dew, CEO of Deseret Book Co., committed during a speech to an audience at the RootsTech family history conference that she would accept a challenge given to attendees earlier that day, February 20, 2016, by Elder Dale G. Renlund of the Quorum of the Twelve Apostles. Elder Renlund’s challenge was for audience members at that Family Discovery Day session to search out as many family names in their genealogy as they did temple ordinances for in the coming year.

At this year’s Family Discovery Day, February 11, Sister Dew was back to report on her efforts. She appeared on stage with Vai Sikahema, television sports director and former NFL and BYU running back; and Reno Mahe, assistant coach for the BYU team and former NFL player and BYU team member.

The two gridiron stars kidded her as she responded to a question from Brother Mahe about whether she had fulfilled her commitment: “Well, almost; I mean, pretty much.”

“In the NFL draft, I was almost 6 feet tall,” Brother Mahe joked.

She went on to explain that before last year she had never submitted even one family name for temple ordinance work. “So it was a pretty big leap to make the commitment I made.”

To help her navigate FamilySearch.org, she enlisted the help of “the most amazing temple and family history consultant. He started to teach me the basics, and with his help I began to find names.”

Since March 1 of last year, every vicarious endowment and sealing she has received in the temple has been for a family name, she said. “And most—a majority—of the initiatory ordinances I’ve done have been family names.”

“Well this must be where ‘almost’ comes in,” Brother Sikahema remarked, asking her to tell more about the initiatory work.

She replied that last summer she had surgery on her knee and for several months it hurt to sit for very long. During her recovery, she did a lot of initiatory work but couldn’t sit long enough to do the other kinds of temple ordinances. Since initiatory ordinances can be done more quickly, she ran out of family names.

“So I’m looking for a little mercy here, kind of like you and the BYU coaching staff were after the BYU-Utah game,” she said, turning to Brother Mahe with good-natured taunting.

She added that during the past year she had found a lot of male names for ordinance work, which members of her family are now doing. Including the male names, she found more names in her research than ordinances she did. “So don’t you think that should sort of count?”

Asked what she had learned, Sister Dew replied that “if you’re a total rookie, like I was, you need a great coach,” that there is “an absolute thrill in finding family names whose ordinance work has not been done,” and that, from her own experience, all of the work has not necessarily been done on one’s ancestral lines. For example, she found five daughters of her third-great-grandparents, daughters who had not been found in prior research.

She said it feels “different” and “sweet” to be with one’s family in sessions at the temple doing work for one’s own kindred dead. “Some of those sealing sessions have been times of pure revelation for me.”

Later, as Brother Mahe helped Brother Sikahema make a Tongan fruit drink from grated mangoes on the kitchen set that was part of the RootsTech main stage this year, the two responded to interview questions from Sister Dew, sharing family and family history stories from their Tongan culture.

Brother Sikahema displayed on a large screen a picture of his great-great-grandfather, in his 80s, wearing a cap and gown.

“The first Tongan school was established in his home, and he graduated from grammar school in his 80s along with his grandchildren!” Brother Sikahema recounted. “And he was so proud of that moment that it was snapped for a picture.”

Brother Mahe shared a family story from his uncle, the eldest on his mother’s side of the family.

“He left the island and went to Hawaii to go and work to help bring his family from the island,” he said. “I always wondered why my mom, anytime that uncle needed anything, she jumped and did everything to go take care of that uncle’s needs.”

She appreciates his sacrifice, Brother Mahe said, because it was through his efforts that the family came from Tonga to Hawaii and eventually to Los Angeles, California.

Sister Dew asked them to share stories of faith that show what family members did to embrace the gospel and then to live it.

Bother Sikahema said his mother’s father was a district president before the Church created stakes in Tonga in the 1940s. As part of his calling he had several islands to visit by boat.

In 1947, when the family was on a return trip from one of these visits, their 10-month-old son died from exposure after the family encountered a storm.

They returned home on a Tuesday and buried the child on Wednesday. Cultural custom would have required they observe seven days of mourning with no travel preceding the burial.

But on Friday, they had to sail again to the main island for a priesthood leadership training meeting with Church leaders who had come from New Zealand. The family had to make the trip because the parents could not contact the Church leaders in Nukualofa to tell them of the family tragedy.

“The result of that was that they were ostracized in their island and they lost their standing in the community because they chose the Church over custom, over culture,” he said. “But the legacy they left us as children and grandchildren is this: whenever there’s a dilemma or a choice between culture and Church—and there’s not a lot of them—always choose the gospel, choose the Church.”

Brother Mahe told of his grandparents selling everything they could and saving to afford a trip to the temple in Hamilton, New Zealand.

“When it came down to it, they didn’t have enough to make that trek,” he said. “My uncle told me that someone dropped off an envelope, and it contained the rest of what they needed to make the trek. … Their faith … is something that will always hold a dear spot in my heart.”

Sister Dew referred to a tragedy Brother Mahe, his wife, Sunny, and their family suffered late last year with the accidental death of their 3-year-old daughter, Elsie. Sister Dew asked him to share some things he has learned from that.

“A lot of that is me just riding my wife’s coattails,” he replied. “I’ve got a great companion.”

He added, “One of the things I’ve learned is that she’s an angel on the other side now that is watching over us. … It’s not just random angels watching over us; it’s our family. It’s our ancestors. It’s my grandparents. And now it’s Elsie. And having LaVell there, Coach Edwards, I just thought about Coach Edwards coaching my daughter back there.”

He said that a father’s job is to see that his children hold on to the iron rod “and get to the tree. So for me, it’s nice to know that Elsie is there; that one made it. I have seven more that I have to hopefully get to where Elsie is at.”

Brother Sikahema said the tragedy happened in November, and at Christmastime he called Brother Mahe to check in on him, telling him, “I know it’s going to be a tough Christmas.”

“His response startled me. He said to me, ‘No, actually it’s not going to be a tough Christmas at all; it’s going to be a great Christmas.’ I said, ‘Why? You lost your daughter.’ He said, ‘Her organs have been harvested, and eight children are going to live or their lives will be improved because of that.’”

At the end of the session, Sister Dew, fresh from her own commitment, asked the two men to each make a commitment related to the temple or family history research in the coming year.

Brother Sikahema committed to join his wife in a 21-consecutive-day commitment to do family history every day for at least a half-hour a day. 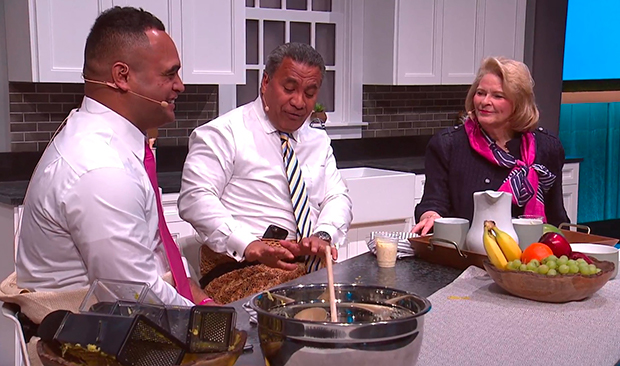 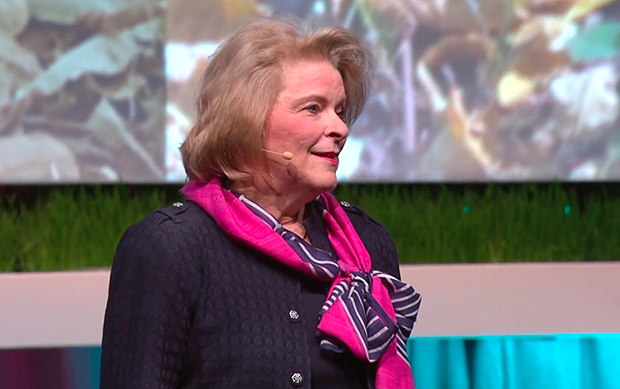