Alignment of Church and U.N. Goals Demonstrated in Service Project for Hungry Children 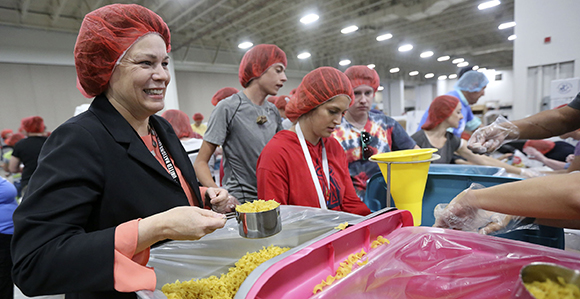 When the United Nations first announced Salt Lake City as its recommended location for the historic 68th United Nations Civil Society Conference—the first conference to be held in the U.S. outside of U.N. headquarters in New York—some likely questioned, “Why Salt Lake?”

On a list of the most globally recognized cities in the U.S., Salt Lake City doesn’t even make the top 20. For many, the city is best known for being the headquarters of The Church of Jesus Christ of Latter-day Saints, as well as Utah’s capital and the host of the 2002 Winter Olympics. But when selecting cities that align with the goals and principles upheld by the U.N., that criterion made Salt Lake stand out.

Another key reason, as Sister Eubank explained, is the reputation that Utah has for being welcoming—and both the history and recognition of the Church play a big role in that.

“This is a place where everybody is welcome,” Sister Eubank said.

And there is certainly a sense of belonging with more than 5,000 people from 138 different countries meeting together in downtown Salt Lake City to discuss problems and solutions on a global scale.

The U.N. and the Church have worked together in an official capacity since 2011, when the U.N. recognized Latter-day Saint Charities, the humanitarian arm of the Church, as an accredited nongovernmental organization (NGO).

This year marks another progressive step in the partnership as the organizations have worked closely together throughout the planning and executing processes for the global conference.

Jeff Brez, the chief of NGO relations and advocacy and special events in the U.N. Department of Global Communications, explained how the Church and Latter-day Saint Charities have been a part of the planning process from the beginning.

“From the first time we came here, they were part of that overwhelming sense of welcome that anyone who comes here for the first time gets,” he said.

The Church community also played a key role in assuring the U.N. that there would be broad-based support in their coming to Utah and for a global conversation typical of the U.N. to happen here, and that was crucial, he said.

Brez attended The Tabernacle Choir’s Music & the Spoken Word broadcast on Sunday, August 25, which highlighted the important work of the U.N. since its inception following World War II. “For me, it was very moving to be there, and we’re so grateful for that sort of show of openness and welcome and support for the mission and mandate of the United Nations,” he said, “so I think that was another demonstration of how important their support is.”

While the principles guiding the actions of the two organizations may be slightly different, Sister Eubank said, both organizations are striving for the same goals—to allow people to feel a sense of community and neighborliness with those around them, even if they may be very different.

“So this is a natural partnership,” she said. 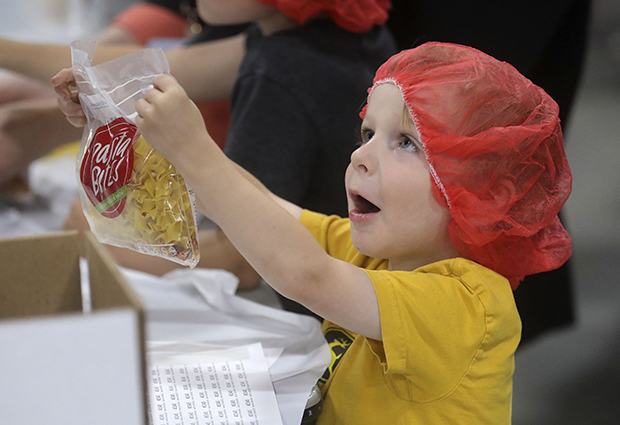 With the theme for the 68th U.N. Civil Society Conference focused on creating sustainable and inclusive cities and communities, Sister Eubank explained just how closely the goals of the two global organizations are aligned in that purpose.

Over the past six or so years in her work with Latter-day Saint Charities, Sister Eubank said, the predominant focus has been with refugees.

“If you look at why people are forced from their homes, it’s because of intolerance versus inclusiveness and because of environmental degradation, because they can’t afford to stay or the climate doesn’t allow them to stay,” she said.

That’s part of why this conference and the topics it addresses are so important, she said, “because they are addressing the root causes of why people are forced to move.”

Being able to talk about the root causes for why people are forced out of their homes and the root solutions for how to allow them to stay and build stronger communities is a positive change from responding on the emergency end of people being displaced, Sister Eubank said.

Utah is also a great place to have a discussion about building sustainable and inclusive communities, because Utah is culturally very focused on families, said Sister Tracy Browning, a member of the Relief Society general board, who presented at the U.N. conference.

Echoing the Relief Society mission statement, Sister Browning said women in the Church have a responsibility to help strengthen families.

“I think the U.N., in their mission, is always looking to hold hands with allies and like-minded organizations to bring good things about,” she said. “And we know that there is a shared stewardship for a lot of women in Relief Society.”

Like-minded work is being done in separate spheres by organizations all around the world, she said, so to be part of a discussion between two of the organizations leading the efforts to strengthen families and communities is a real privilege.

On strengthening families, Sister Eubank added, “It’s a very relevant topic in today’s world to talk about: How can we strengthen people in their family unit so that they become productive and healthy citizens?” 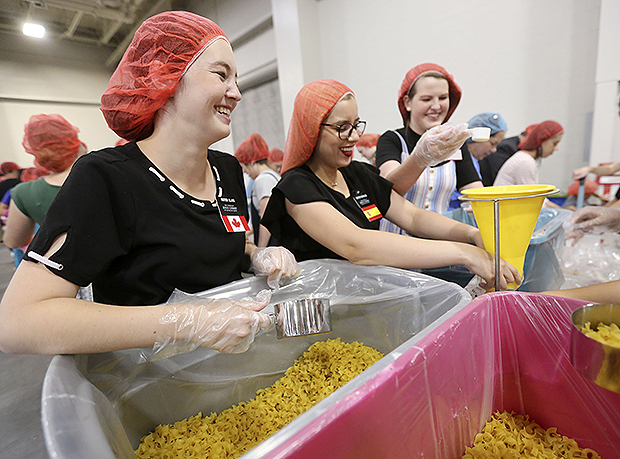 During the three-day conference in Salt Lake City, one way the organizations highlighted the importance of building inclusive and sustainable communities was through a large-scale service project geared toward feeding children.

“Service to kids who don’t have enough food is a perfect way of getting together, because we can all agree on that,” said Sister Eubank.

Working to prepare more than 500,000 take-home meals for children throughout the U.S., masses of volunteers—many of whom signed up through the Church’s JustServe website—showed up at the Salt Palace Convention Center throughout the conference. The turnout was much greater than expected, and the goal for the number of prepared meals was surpassed in just the first two days.

“DNA that runs in The Church of Jesus Christ of Latter-day Saints—but I think also in Utah and the United States—is this spirit of volunteerism. We do volunteerism in a way that’s unique around the world,” Sister Eubank said, adding that the JustServe platform offers thousands of opportunities to connect volunteers with opportunities and vice versa.

“We feel that it is our privilege and duty to love our neighbors and to help our neighbors in any way that we’re able,” Sister Browning said, “in big ways and in small ways.”

As more people reach out to their neighbors, she said, value will be added not only to their own lives but also to their communities at large. 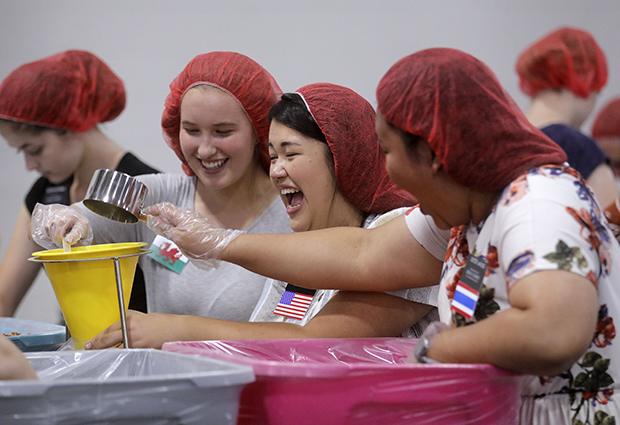 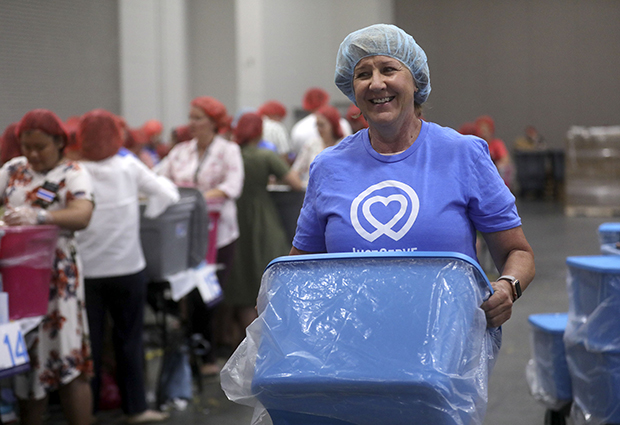 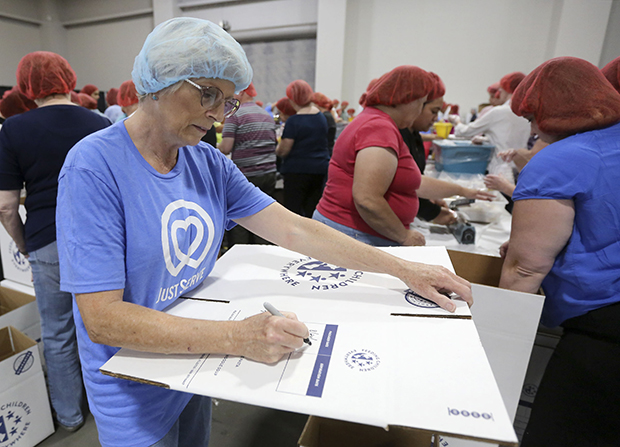