Jean Niyonzima accepts a donation outside a Deseret Industries store.

“We provide a stepping-stone to reenter the workforce and learn employable skills. … For many, it is a safe space for people to land.” —Brenda Smith, Welfare Department

Working as a 25-year-old police officer in Texas, Mo Jarmin was directing traffic one day when a semi-trailer truck going 60 mph struck him, leaving him severely injured and barely alive.

The report from doctors was grim—they never expected him to walk, or even talk, again.

“I should be dead, but I’m not,” Jarmin said of the experience.

Jarmin spent the next 30 days in a coma and endured 39 surgeries—including one to remove his leg.

“I was a police officer, and after the accident I wasn’t able to be in that line of work anymore,” he told the Church News. “I was kind of scared to even talk to people and didn’t know what to do.”

His employment—and life as he knew it—was over; not only did he lose his leg, he lost his self-confidence.

Recognizing he needed to do something for work, Jarmin decided to try a suggestion from his bishop and to go to work at Deseret Industries.

“I worked in the collectibles section and then moved up to the cashiers where I got to interact with people and talk to them on a normal basis,” he said. “Just the interaction with people built my confidence up.”

While working at the Deseret Industries, Jarmin learned he was going to be OK.

“I was in a wheelchair at the time and I had to realize ‘I am still me,’” he said. “I could do what I wanted to do, and they wanted me and supported me with everything. That was a big burden off of my shoulders just knowing that.”

Jarmin, who now lives in the Mountain Shadows 6th Ward in West Jordan, Utah, worked at the Deseret Industries for about 10 months before transitioning to a job in security. He has been working in the security business ever since.

“I am serving the citizens,” he said.

As he found employment, Jarmin realized he has much to offer.

“It might take me a little bit longer, but I can still help out.”

Jarmin is only one example of the thousands of lives that have been changed through Deseret Industries.

Eighty years after the first Deseret Industries store opened in 1938, people—as well as commodities—are getting a chance at a new life.

A history of helping

In August of 1938, the first Deseret Industries store opened in downtown Salt Lake City. The goal of the new store: to provide job training and low-cost goods.

It was toward the end of the Depression, and the First Presidency announced in a letter dated August 14, 1938, an effort to “provide opportunities for individuals to become self-sustaining.” 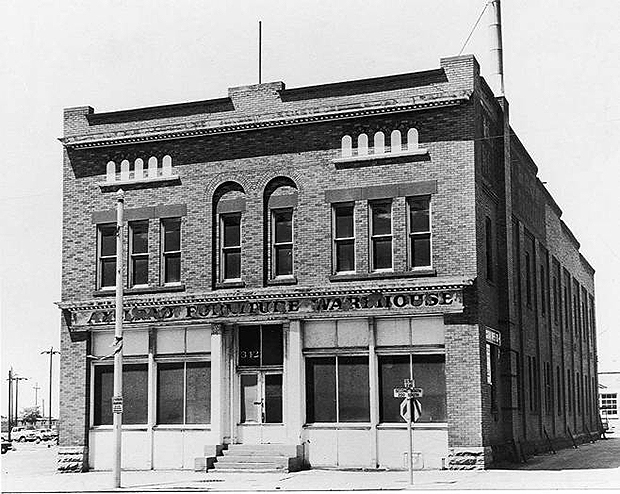 Read in sacrament meetings throughout the Salt Lake region, the letter issued a call from Church leaders for contributions of “clothing, papers, magazines, articles of furniture, electrical fixtures, metal, and glassware.”

The store would employ men and women who would sort, process, and repair the donated goods, preparing them to be sold at a nominal cost.

Elder John A. Widtsoe, who was serving as a General Authority at the time Deseret Industries opened, established four guiding purposes:

“First, those who have will be given another type of opportunity to help those who have not. Second, waste will be reduced by keeping our possessions in use as long as possible. Third, the work of renovation will employ many now unemployed. Fourth, articles in common use, of good quality, will be available at a low cost” (“Editorial: Deseret Industries,” Improvement Era, Sept. 1938). 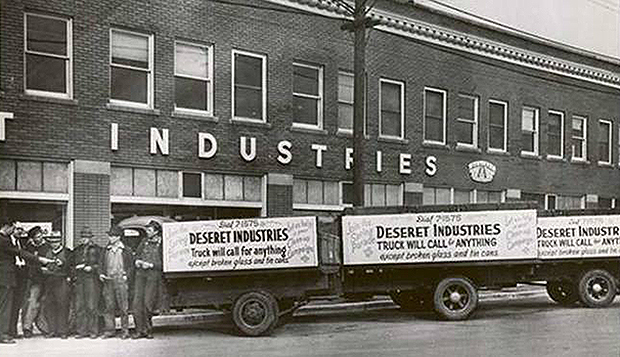 More than two decades later, in the 1960s and 1970s, Deseret Industries added another element to its purpose—rather than just focusing on second chances for commodities, the program would offer second chances to people.

Whether helping to train people with disabilities, those who were experiencing hard times, or those who never had an opportunity for training or vocational skills, the job training went beyond those needing employment during the Depression.

“Our product is people,” said Lisa Leavitt, manager of retail operations and awareness for Deseret Industries. “People think the DI is a place for people to bring their used [commodities], but people are actually why we exist. We can open a thrift store and we have Deseret Manufacturing, but our product is people.” 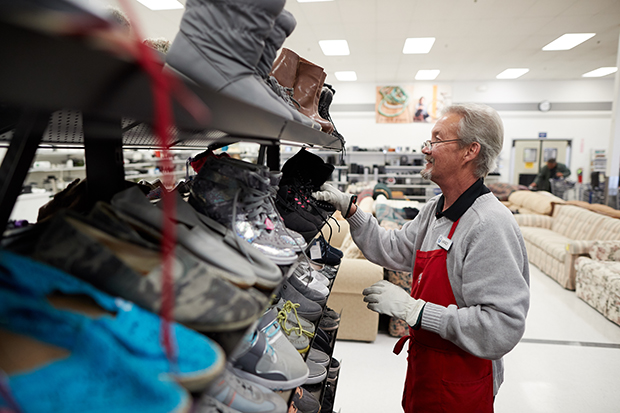 An associate in the job-training program works at a Deseret Industries store.

With 43 stores—and the 44th store scheduled to open in Gilbert, Arizona, this fall—located in seven western states, Deseret Industries has played an important role in building communities.

Yet there is so much more to it than just brick and mortar thrift stores.

In 2017 alone, some 16,000 associates were helped, either through employment or training. More than 42,000 volunteers gave of their time, and 6,149,330 pounds of commodities—clothing and shoes—were provided in humanitarian aid.

In addition to providing communities with new and used commodities at a lower cost, Deseret Industries provides training and on-the-job experience for people seeking employment. Associates gain work experience and skills—learning how to greet others, be on time, and gain the confidence needed to work—in a learning environment.

Some associates are paid by Deseret Industries to work at a local business.

“Business partnerships are internship-type experiences where Deseret Industries pays the associates’ wages while they are working for another organization to get skills and experience,” said Denya Palmer, communications specialist in the Church’s Welfare Department. “[We] send someone to another business, organization, or company to get some skills and experience. Sometimes they end up getting hired at that business if they have an opening and it is a good fit.”

The Community Partnership Program began in 1999 and offers vouchers to non-LDS, nonprofit charitable agencies that go toward helping people in the area. Vouchers allow individuals and families in need to select items at Deseret Industries stores.

“When people donate to DI they can know that their donation is going to go wherever it is most needed or makes the most difference,” said Palmer. “Whether that is being sold to someone in the store and going to have a new life that way, or going to humanitarian aid in their community or somewhere around the world, or some items are recycled. Whatever happens to your donation, something good is happening.”

Purchases make it possible to provide services, Palmer said. “You should feel good either shopping or donating.”

A place of understanding, nurturing, and encouragement

Located in South Salt Lake is the Deseret Manufacturing warehouse. At first glance the gray building looks like any other building on the block—large and industrial.

But within a few steps inside, individuals are greeted with images of the Savior and smiling faces.

Unlike Deseret Industries, where used items are donated, all of the commodities made at the Deseret Manufacturing warehouse are new and include mattresses, wood beds, dressers, and kitchen tables.

Like Deseret Industries stores, associates are building their future as they work there. 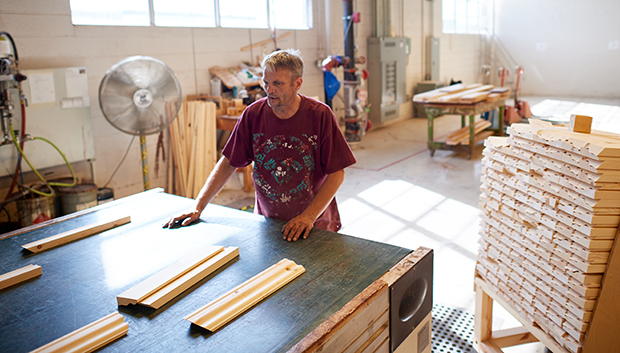 An employee works at the Deseret Manufacturing plant in South Salt Lake.

Many of the employees are working through addictions, have language barriers, or have been handed a tough situation in life, said Dan Colvin, welfare processing facility manager at the Deseret Manufacturing facility.

No matter their background, each associate has access to a job coach, who works with the associate side by side and helps set and evaluate goals, as well as a development counselor who helps determine what other services—and if an individual qualifies for those services—a person needs.

“There is a broad spectrum of individuals that can be helped,” said Brenda Smith, a product manager in the Welfare Department. “Whether it is a mom returning to work, a young person preparing to serve a mission, someone who has experienced social challenges or recently lost their job, we provide a stepping-stone to reenter the workforce and learn employable skills. … For many, it is a safe space for people to land.”

After 80 years of serving people and communities, the mission of Deseret Industries remains the same—helping people move forward in employment, hope, and understanding their divine identity.

“In this facility and others like it you will find some of the finest people this world has to offer,” said President Henry B. Eyring of the First Presidency during a Deseret Industries dedication in 2013. “Often those who come here have journeyed through dark valleys of suffering and distress, persecution, and failure. No matter the path they have walked, here they are offered safety and blessed hope—a place of understanding, nurturing, and encouragement.”

To read more about the experiences of associates or what Deseret Industries has to offer, visit its website.