A Brief History of General Conference 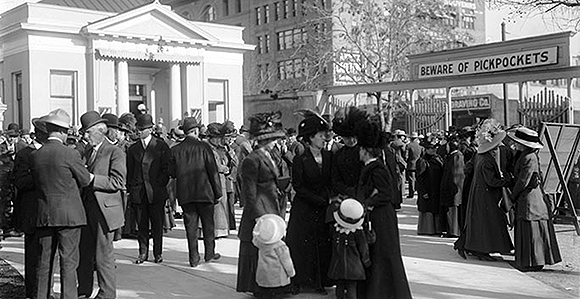 Crowds gather for general conference in April of 1911. Note the sign above the entrance to Temple Square, “Beware of Pickpockets.” The old Deseret News building is seen across the street.

The origins of the Church’s general conference date back to the Prophet Joseph Smith and the early Saints who helped grow the restored Church. On June 9, 1830, shortly after the April 6, 1830, organization, the first conference was held. Only 27 members were present.

As members moved from New York to Ohio, Missouri, and Illinois, conferences continued wherever Church members were gathered. A meeting in 1833 was held on the Big Blue River ferryboat in Missouri. The scattered members continued to meet in various locations until most settled in Nauvoo, Illinois. Several summaries were published during the Nauvoo era in the Times and Seasons from November 1839 to February 1846. In 1840, a banner year for conferences, the Church moved to a semiannual schedule, held its first conference outside the United States in Great Britain, and published conference talks and summaries in the Millennial Star.

During the western exodus of the Church, which began in February 1846, no general conference was held. The meetings resumed along the westward trail in Iowa and Nebraska. The meetings continued and then started again in 1848, after pioneers arrived in the Salt Lake Valley in 1847. The first full report of any conference address was published in the Deseret News on April 6, 1850. In that year, the Deseret News was able to print word-for-word transcriptions because a young reporter, George D. Watt, had learned shorthand and transcribed the talks for publication.

The first conference in the Salt Lake Valley was held in an open-air bowery. Later the pioneers built an adobe tabernacle and then moved to the world-famous Tabernacle on Temple Square in 1867. Conferences continued in the Tabernacle until 2000, when the Conference Center near Temple Square was completed and was first used for conference. It seats 21,000 people and fills for each of the five general sessions. Beyond the immediate audience, the conference reaches across the earth with radio, television, satellite, and Internet connections and is translated into almost 100 different languages.

Wider access to general conference commenced with a radio broadcast in 1923 and a television transmission in 1949. Beginning with the April 1942 conference and continuing through October 1970 the Improvement Era devoted two issues a year to reporting conference talks. Conference sessions were viewed on television beyond the Intermountain region beginning in 1953, while satellite broadcasts began in 1975 and Internet availability started in 1999. Conference messages were first translated into different languages in 1962. Beginning in 1971 conference talks began to appear in the Ensign magazine and are published today in the May and November issues.

According to data gathered in 2012 by the Church, more than 100,000 people attend conference in the Conference Center in Salt Lake City, Utah. Conference is viewed in 175 countries and territories, and it is translated into 94 languages. About 595,000 households in North America tune in on television for the Sunday morning session.