5 Things We Learn from Database of Mormon Pioneers

A pioneer wagon train is featured in this painting by John Moser.

The first Mormon settlers of Salt Lake City came to the area in 1847, and over the next 20 years they were followed by an estimated 70,000 emigrants. Now, nearly two centuries later, a new database provides fresh new insights about these overland pioneers.

The Church History Library’s Mormon Pioneer Overland Travel database, online at history.ChurchofJesusChrist.org/overlandtravels, attempts to document every overland pioneer and is the product of more than two decades of work. The database currently lists more than 57,000 individuals with links to thousands of original and authoritative records of pioneer experience. The database can be searched by name or browsed to find stories and photos of the city’s first residents.

Here are five things we learn from this powerful new resource:

1. Most of the pioneers did not die.

Despite the fact that tens of thousands of pioneers survived to settle in the Salt Lake Valley, the idea of pioneer death has been perpetuated in popular culture. But if a person compares rosters of pioneers who started the journey against later censuses of residents in the city, the result is quite surprising.

Using the database, a team of statisticians and a historian calculated the pioneer mortality rate at 3.4 percent, which was only slightly higher than national averages at the time (between 2.5 and 2.9 percent). Of the 1,900 pioneers who died on the trail or within the calendar year of their arrival, many died from illnesses common to the time, such as cholera or dysentery. The year of travel, month of departure, and mode of travel all influenced the likelihood of death.

Monuments, murals, movies, and music have also enshrined the image of a struggling pioneer family pulling a handcart across the plains. But scan the list of more than 370 companies in the database and you’ll find only 10 handcart companies. This mode of transportation was used in 1856-57 and 1859-60 by roughly 3,000 of the overland pioneers.

If most of the pioneers weren’t dying or pulling handcarts, what did they actually do? Their diaries, letters, and other records show that in addition to completing the tasks and chores of traveling, most of them had fun. They formed friendships, helped one another, sang and danced, hunted game, gathered wild fruit, picked flowers, and climbed hills.

“We enjoyed the journey much,” wrote Ellen Hallett to her parents in England in 1862. “When night came we were generally tired,” she added, “but not too much to enjoy the dance and song.” William Fuller wrote to his wife’s parents that she “walked almost the entire way. The truth is, you somehow get the spirit of walking, and the travelling is not half so bad as it is to sit and think of it.”

This year, the Overland Travel website begins a new feature sharing “Humor on the Plains,” such as an embarrassing encounter with a skunk, a squishy discovery of soft buffalo chips, and the hijinks of teenage boys with wagon grease.

4. Many of the pioneers traveled east.

One of the striking features of pioneer diaries and letters is how often they met other pioneers going the opposite direction on the trail. Many who completed the journey returned to the east to lead others along the route. Freighters moved goods back and forth. Mormon missionaries left Salt Lake City and followed the trail to the cities and states of the east. At least three pioneers in the database made the westward trip seven times! In this, even Brigham Young provides an example. After leading the vanguard pioneer company that arrived on July 24, 1847, he returned east to Winter Quarters, Nebraska, by December 1847. He led a second company to Salt Lake the following year.

5. Pioneers were not alone on the trail.

Even as Mormon pioneers traveled both west and east, they were far from the only travelers on a very busy trail. Throughout the 19th century, hunters and trappers traversed the trails and rivers. The first portion of the overland trail led to Utah as well as Oregon and Montana. Beginning in 1849 westbound gold seekers used the trail to get to California. Express riders and stage coaches carried mail and passengers back and forth. Historians estimate that more than 500,000 Americans traveled west during the 1840s through 1860s. Salt Lake City’s pioneers formed a unique part of the nation’s wider history.

This year, the Mormon Pioneer Overland Travel database has been integrated with FamilySearch, linking the trees of FamilySearch users with the pioneers in the database. The database is also featured in FamilySearch’s international “I Am a Pioneer” social media campaign (#IAmAPioneer), which will encourage individuals today to recognize themselves as modern-day pioneers and emphasize the need to record their own stories of triumph for future generations. See related story. 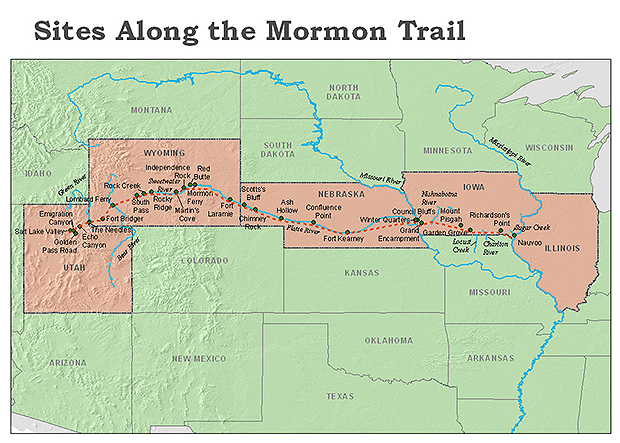 A map from the website features sites along the Mormon Trail in 1847.