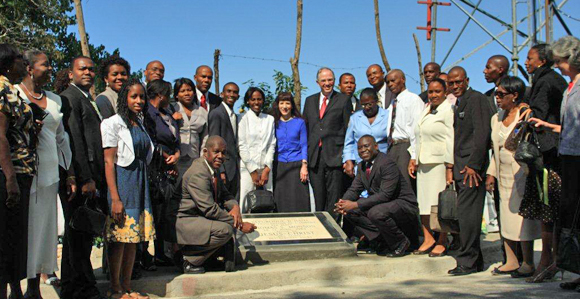 Elder Neal L. Andersen, his wife, Kathy, and leaders and missionaries in Haiti pose near a commemorative plaque marking the beginnings of the Church in Haiti.

“The important things in life are not between wealth and poverty or between fame and obscurity—the important choices in life are between good and evil.” —Elder Neil L. Andersen of the Quorum of the Twelve

Even as members in Haiti labor to build a promising future for their faith and families, they remain grateful for the Church’s humble beginnings—and the pivotal, historic role of a prophet in their island nation.

It was three decades ago that President Thomas S. Monson—then a member of the Quorum of the Twelve—visited Haiti and dedicated the land for the preaching of the restored gospel. Since that time, the Haitian members and their neighbors have endured staggering economic struggles and, three years ago, a devastating earthquake.

Elder Andersen’s visit to Haiti commemorated the Church’s 30-year anniversary in the country. On February 12, Elder and Sister Andersen and a large group of Haitian members drove high above the capital city of Port au Prince to Mt. Boutillier—the mountain site where Elder Monson delivered his dedicatory prayer.

There Elder Andersen presided over the unveiling of a commemorative plaque that will serve as a permanent reminder of the beginnings of the Church in Haiti. The members who gathered for the unveiling ceremony were thrilled to view a televised message from President Monson that was recorded prior to the event.

In his message, President Monson said his duties precluded him from being in Haiti in person, “but my heart is surely with you as we reflect together on the remarkable progress of the kingdom of God in your country, as well as on the blessings that we all enjoy as children of our Heavenly Father.”

The Church President noted the growth that had occurred in Haiti since his 1983 visit when the Church was in its infancy.

“Now, with nearly 20,000 members in four stakes and three districts, the Church is becoming a great blessing to the country of Haiti and to her people,” he said. “Thousands of faithful families kneel together daily in family prayer to thank God for His blessings and to seek His protection. I know that those prayers are heard and answered.”

He went on to note the number of youth attending seminary and institute and serving full-time missions. “Surely, our Heavenly Father is honoring and answering the dedicatory prayer it was my privilege to offer those long years ago.”

President Monson concluded his message by saying that “glorious days” await the members who keep their sacred covenants.

At the commemoration event, Elder Andersen spoke of the Church’s “deep appreciation” for the many who have played key roles in setting the foundations of the gospel upon Haitian soil. The work of the gospel, he added, is primarily spiritual work, saying, “The important things in life are not between wealth and poverty or between fame and obscurity—the important choices in life are between good and evil.”

Elder Andersen noted the struggles that Haiti has endured since the dedicatory prayer.

“Three years ago following the terrible earthquake, all the Church and all the world cried with you. These have not been easy days for you. We thank you for your examples of courage, of faith, of seeing blessings even in the difficulties.”

He emphasized the importance of work to secure life’s necessities, along with the value of education. He saluted the parents and Church leaders who strive to educate the youth of the Church in Haiti.

In a Church News interview following the Caribbean Area tour, Elder Andersen spoke of the many Church-sponsored projects underway in Haiti. Members throughout the country will soon begin planting hundreds of thousands of fruit trees donated by the Church. The trees will provide fruit, shade, and soil conservation for years ahead. The fruit tree project caught the attention of Haitian Prime Minister Laurent Lamothe, who thanked the Church in an official letter.

The Church is also involved in various educational and employment programs designed to help the members live providently and serve in their communities and congregations.