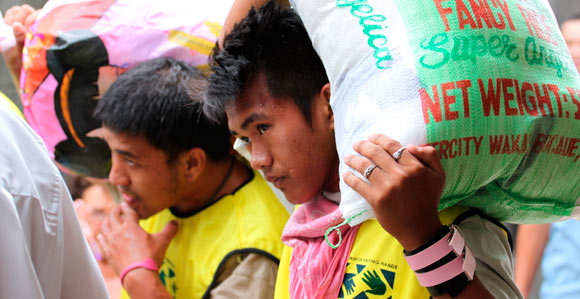 Since September’s typhoons, members in the Philippines have mobilized to provide relief in the form of food, water, and blankets to those in need.

“We are grateful that [the Mormon Church] chose our humble barangay (village).” — Pepito Reyes, village captain of Daldalayap, located in the province of Tarlac

In response to two typhoons that hit the Philippines in late September, causing massive flooding, the Church Welfare Department has joined hands with other local non-governmental organizations such as the Rotary Club and Soroptomist Church, as well as with the Philippine Army in distributing goods and hygiene kits to the affected cities and villages.

A few days after the typhoons, members of the Camiling East, Santa Cruz, Cabanatuan, Angeles, and Malolos Philippines Stakes spent hours packing relief supplies for those affected by the calamity. Then, donning yellow Mormon Helping Hands vests, they helped distribute the relief goods.

Pepito Reyes is the village captain of Daldalayap, located in the province of Tarlac.

“We are grateful that [the Mormon Church] chose our humble barangay (village),” he said. “This really came from heaven.”

Priesthood holders of the Malolos stake joined efforts with members from nearby stakes to help in rescuing individuals from the flooded environment. Bishop Ruperto Dela Cruz of the Valenzuela stake supplied his jet ski to help in the rescue process.

In Hagonoy, Bulacan, branch president Leo Antonio Gatacilo’s home was submerged. Along with many other members from his unit, he and his family were forced to evacuate to the meetinghouse.

Realizing that food and water were not readily available to them, President Gatacilo, who cannot swim, and three other priesthood holders walked for more than three hours—a distance of several miles—through chest-deep waters to reach the provincial capital of Bulacan, Malolos, where they were able to gather resources.

“I just thought of my family and the members of the branch and that they needed help,” he said. “I trusted that those who came with me would save me, whatever happened.”

Tirso Jagonoy and his wife, Lea, of Calumpit, Bulacan, have been helping in the relief process even though their own home was devastated by the flood.

“We lost it all,” Sister Jagonoy said. “My family and my scriptures are the only things that I have left.”

When they heard that stake leaders were planning to distribute supplies to others, they decided that they should help. “We are much needed here,” Brother Jagonoy said.

Lucita Magguodatu was a recipient of the members’ distributions. “We are happy for the help because we are poor, and our resources are gone,” she said.