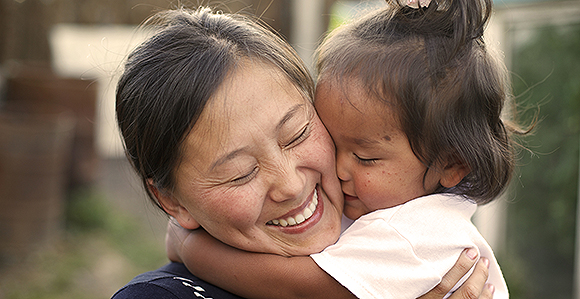 Beginning in January 2018, Primary children around the world will learn to understand their divine identity, purpose, and potential as they sing and learn together during sharing time.

“It will be such a great year for [Primary children] to learn to understand their relationship with Heavenly Father and to have a better understanding of who they are, who He is, who the Savior is, and how the Holy Ghost influences them in their efforts as a child of God.” —Sister Joy D. Jones, Primary General President

Perhaps the most recognized and oft-sung hymn in the Church, “I Am a Child of God,” has united Church members of all ages, locations, and languages since it was written in 1957.

No matter the setting—a Primary sharing time, sacrament meeting, or family gathering—the familiar melody and words teach some of the most fundamental doctrines of the gospel: that every person is a son or daughter of Heavenly Parents.

Beginning in January 2018, Primary children around the world will sing and study those powerful words during sharing time as instructors teach the theme “I Am a Child of God” and help them understand their divine identity, purpose, and potential.

“Our children deserve to understand their divine identity from the very beginning,” Sister Joy D. Jones, Primary General President, told the Church News. “It will be such a great year for them to learn to understand their relationship with Heavenly Father and to have a better understanding of who they are, who He is, who the Savior is, and how the Holy Ghost influences them in their efforts as a child of God.”

The scripture to accompany this year’s theme comes from “The Family: A Proclamation to the World,” which says, “All human beings—male and female—are created in the image of God. Each is a beloved spirit son or daughter of heavenly parents.”

“This is a learning year,” said Sister Bonnie H. Cordon, First Counselor in the Primary General Presidency. “The adversary’s tactics and lures are ever more carefully crafted to confuse us of our eternal identities. He bombards us with his degrading message on all sides. What an important time to remember we are children of our Heavenly Father.”

While each month identifies a different song and doctrine of the gospel, each topic is meant to help Primary children increase their faith in Jesus Christ and develop a testimony of the plan Heavenly Father has for each one of them.

The designated music for the Primary presentation is “familiar,” said Sister Jones, and includes the songs “I Am a Child of God,” “A Child’s Prayer,” “If the Savior Stood Beside Me,” and “Families Can Be Together Forever.”

“We are excited for the children to learn and understand the doctrines of the gospel as they sing Primary songs,” Sister Jones said. “They can enjoy singing familiar songs this year instead of learning new songs and new words. We hope they really get these wonderful doctrines rooted in their hearts.”

The Primary leaders said the Primary music is crucial to teaching children the doctrines of the gospel.

“Music has such an influence in our lives,” Sister Franco said. “We can always go back to those Primary songs and they testify to your heart that we are all sons and daughters of our Heavenly Father.”

Sister Jones added, “We tease a lot about the music leader in Primary being the Gospel Doctrine teacher. [He or she] is because he or she is teaching doctrine. The more the music leader can help the children sing … the more they will be able to memorize and internalize the messages of these songs, which is so important. Then they will hopefully take the songs home and sing them with and strengthen their families.”

Although the resources are meant to be a guide for Sunday meetings, they can also be used in lessons with family at home.

“Any resource that is out there for Primary can be brought into the home,” Sister Cordon said. “Together at church [children] can learn with their peers, and also together as a family in their home. … The more opportunities that the kids have and the more opportunities they can share, not only at church in sharing time but also at home, is going to fortify that foundation so that they feel it and it is in their hearts.”

Through understanding their divine identity, Primary children are then able to realize they are part of something bigger, said Sister Jones.

“We are seeing so many children who are engaging in family history at young ages now, and it is leading them to the temple, and that is fantastic,” she said. “That is what we would love more than anything—that all children would have their eyes on the temple and be preparing continually.”

Include children with disabilities

Another important message the presidency mentioned was that of working with children with disabilities.

Sister Jones hopes that leaders work with parents and counsel together to help children with disabilities feel a part of Primary.

“We are really concerned,” Sister Jones said. “We hear a lot of things about children who struggle in Primary because … their parents may not feel like they fit in or because they might create a disruption, so they keep them home from Primary.”

Rather, it is important for leaders and even other Primary children to look for ways to help a child with a disability feel happy and welcome in Primary. (See disabilities.ChurchofJesusChrist.org.)

“They are a needed part of the group, and the children learn so much from these precious spirits who are children of God, just like they are,” Sister Jones said.

Most important, the music and lessons are meant to strengthen the testimonies of all who hear them.

“If they didn’t take anything else from this year other than, ‘He loves me, He knows me, I really matter,’ would that not be something powerful?” Sister Jones said. “If that seed is planted in their hearts, it can stay and strengthen them and be with them throughout their lives.”

That knowledge helps children—and adults—seek after the Spirit, stand up for what is right, and help others do the same.

“I hope that this message … strengthens children so that they can stand up and be a light, not being afraid or embarrassed to share what they believe—to be able to say, ‘I love my Heavenly Father and I know He loves me, and because of that I do this, or I don’t do that.’ What a blessing to empower the children to understand that they can be different, and different is OK. It doesn’t matter how old they are, they can be taught the power and ability.”

To learn more about the theme and download the sharing time outline, visit primary.ChurchofJesusChrist.org.