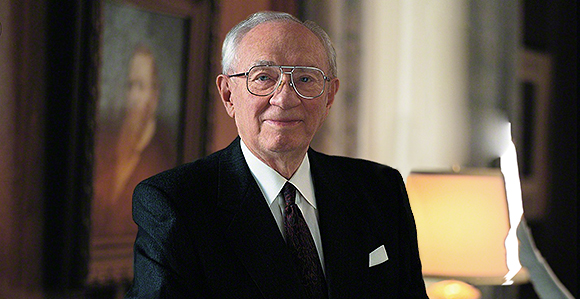 Final official portrait of President Gordon B. Hinckley, who is the focus of the 2017 course of study for Sunday Relief Society and Melchizedek Priesthood meetings.

During his U.S. presidential administration, Ronald Reagan—consummate speaker and former Hollywood actor—was often referred to by pundits as “the great communicator.” In the context of Church leadership, the same appellation might be applied to President Gordon B. Hinckley.

A talented writer, President Hinckley delayed fulfillment of an early ambition to obtain a graduate degree in journalism to serve a mission to England. He forsook that plan altogether when he was hired by the First Presidency to be the executive secretary of a newly formed committee of General Authorities that would be the forerunner to today’s Department of Public Affairs.

Except for a two-year stint during World War II when he worked for a railroad (he wanted to serve the country in some way, having had his application for officers candidate school turned down due to allergies), he never left his close association with Church headquarters, either as a full-time Church employee or as a General Authority.

His lifetime of service would involve responding to calls as an Assistant to the Twelve Apostles, a member of that Quorum, and a counselor to three Church Presidents. Ultimately, he would become Church President himself on March 12, 1995, serving until his death on January 27, 2008.

President Hinckley, the 15th man in this gospel dispensation to preside over the Church, is the focus of the latest in the series Teachings of Presidents of the Church, which serves as lesson material for the weekly Relief Society and Melchizedek Priesthood meetings in the wards and branches of the Church.

This may be the last book in the series, as all other former Church Presidents have been featured in previous years.

Where to get it

The manual is available in the following formats: print (including large print and Braille), online text, PDF, ePUB, audio, mobi, iBooks, Kindle, and, of course, in the Gospel Library mobile app.

Copies of all the books in the series are available through the Church distribution centers and can be accessed onlineon ChurchofJesusChrist.org.

Ironically, the series was begun in January 1998, during President Hinckley’s Church presidency. All adult members of the Church were to receive copies of the manuals from year to year. It was contemplated that, as the Church added volumes to the series over time, Church members could build a collection of gospel reference books that could be used for personal study as well as resources for teaching in family home evening and in other lessons or talks and for answering questions about Church doctrine.

One can only guess whether anyone foresaw back in 1998, when the series began, the teachings of President Hinckley himself one day would be the focus of a book in the series.

Following the pattern of previous books in the series, this one offers a chronology giving a brief overview of major events in President Hinckley’s life as well as a narrative summarizing his life and ministry.

Chapters in the book, meant to be taken up as lessons in the priesthood and Relief Society classes, excerpt President Hinckley’s discourses on subjects such as the Restoration, the pioneer heritage of Church members, daughters of God, prayer, following spiritual promptings, looking to Christ, the gift of testimony, marriage, obedience, service, the priesthood, the Book of Mormon, missionary work, the holy temple, and the Atonement.

The section on his life and ministry mentions his ancestral heritage and his birth in Salt Lake City. He was his mother’s first child but had eight older siblings born to his father, Bryant S. Hinckley, and his first wife, Christine, who died. Four younger children would be born to Bryant and Ada Bitner Hinckley.

As a boy of 12, Gordon would experience the foundation of his testimony of the Prophet Jospeh Smith. Sitting in the back row at a priesthood meeting presided over by his stake president father, Gordon heard the 300–400 men in attendance sing the hymn “Praise to the Man.”

“Something happened within me as I heard those men of faith sing,” he recalled in his adulthood. “There came into my boyish heart a knowledge, placed there by the Holy Spirit, that Joseph Smith was indeed a prophet of the Almighty.”

Gordon grew up and attended the University of Utah, weathering the trials of the Great Depression, his mother’s premature death from cancer, and troubling questions about his faith.

Upon graduation, he expected to enter the prestigious Columbia School of Journalism in New York, but that plan was derailed by his mission call.

It was early in his mission in England that he had a formative experience he would recount in later life. Discouraged by the lack of reception he saw to his gospel message, he wrote to his father to say he felt he was wasting his time and his family’s money.

His father replied in a return letter: “Dear Gordon, I have your recent letter. I have only one suggestion. Forget yourself and go to work.”

Those words, combined with a scriptural passage he had read earlier in the day, Mark 8:35, about losing oneself in the service of Christ, and a prayerful pledge to give himself to the Lord made all the difference.

“The whole world changed,” he would recount later. “The fog lifted. The sun began to shine in my life. I had a new interest. I saw the beauty of this land. I saw the greatness of the people. I began to feel at home in this wonderful land.”

While on his mission, Elder Hinckley served as assistant to Elder Joseph F. Merrill of the Quorum of the Twelve Apostles, who was presiding over the British and European missions, headquartered in London. This put him in a position to fulfill a request upon his return home that he made an appointment with the First Presidency to report on the needs of the missions.

As recounted in the new manual, “He went to work developing scripts for radio programs and filmstrips, writing pamphlets for missionaries, developing professional relationships with media pioneers, and researching and writing about Church history. He contributed to messages designed to build the faith of Church members and connect with people outside the Church.”

Much of that stemmed from his experience as a missionary, including the use of filmstrips as a teaching aid in proselyting work, then cutting-edge technology that would continue to be used by missionaries in the Church until the advent of home videocassettes.

“Do you know the romance of a celluloid strip and a beam of light?” he asked in the lead paragraph of his May 2, 1936, Church News article extolling the virtue of this medium for teaching the gospel, then so new that the slides had to be hand tinted for color.

While working for the committee, Gordon would marry a young woman he knew from his youth, Marjorie Pay, on April 29, 1937. Five children would be born to the Hinckleys: Kathleen, Richard, Virginia, Clark, and Jane.

Gordon’s work at Church headquarters would expand. He was tasked with finding a way to present temple instruction in many languages at the new Swiss Temple, then under construction. He developed the first use of the temple endowment on film, with the dubbing in of several languages. The technique today is widely used in the temples of the Church.

His service would follow as Assistant to the Twelve—a General Authority position that no longer exists—and subsequently as a member of the Quorum of the Twelve Apostles.

In 1981, President Spencer W. Kimball called him to serve as an additional counselor in the First Presidency; President Kimball and his counselors were not well physically and needed the additional help.

Upon the death of President Hunter, President Hinckley was set apart as President of the Church on March 12, 1995.

A theme of his administration was set by an impromptu response to a question posed to him at a news conference just after he became Church President: “Carry on.” 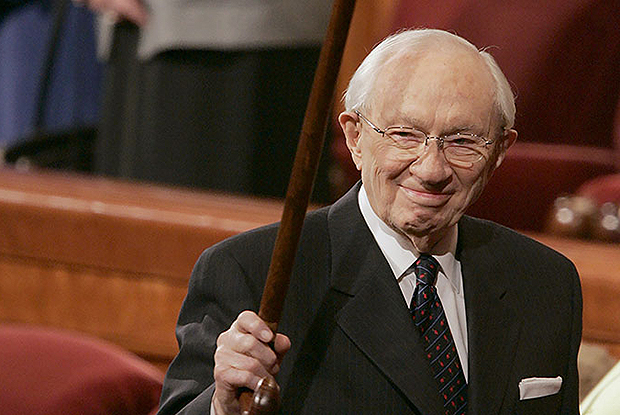 President Gordon B. Hinckley waves his cane to the crowd as he leaves general conference.

Another theme was bringing the Church out of obscurity.

“President Hinckley’s extensive background in media and broadcasting helped prepare him for this effort,” the new manual reads. “As President of the Church, he frequently granted interviews to journalists around the world, answering their questions about Church doctrine and policy and bearing his testimony of the Savior and the restored gospel. Each time, understanding increased and friendships were developed.”

One of the journalists was Mike Wallace, the legendary, hard-bitten investigative journalist with the CBS Television program 60 Minutes.

In general conference on the day his interview with Mr. Wallace was to be broadcast, President Hinckley admitted to having reservations. “If it turns out to be favorable, I will be grateful,” he said. “Otherwise, I pledge I’ll never get my foot in that kind of trap again.”

The “Life and Ministry” section in the new manual covers many more aspects of President Hinckley’s presidency, such as his travels among the Latter-day Saints, reaching out to new converts, and the construction of many new temples, including the rebuilding of the historic Nauvoo Illinois Temple, which had fallen into the hands of mobs and eventually was destroyed when the Latter-day Saints were driven from that city in 1846 to eventually settle in the Mountain West.

Through his ministry, his sure witness of the Lord Jesus Christ was pervasive, perhaps best reflected in the words of a hymn he penned for the Church’s current hymnal, published in 1985:

“I know that my Redeemer lives,
Triumphant Savior, Son of God,
Victorious over pain and death,
My King, my Leader, and my Lord.

“He lives, my one sure rock of faith,
The one bright hope of men on earth,
The beacon to a better way,
The light beyond the veil of death.

“Oh, give me thy sweet Spirit still,
The peace that comes alone from thee,
The faith to walk the lonely road
That leads to thine eternity.”
(“My Redeemer Lives,” Hymns, no. 135).