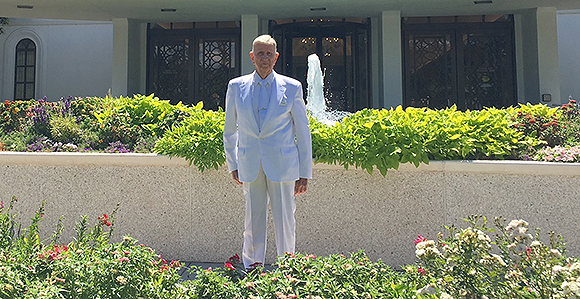 Carl Freeman, 104, stands outside the St. George Utah Temple where he works in the baptistry and at the recommend desk. Photo courtesy of Tara Mickelsen.

“I’m not a person who likes to take, I like to give—and my experience working in the temple is a real highlight.” —Carl Freeman, 104-year-old temple worker

You could forgive St. George Utah Temple worker Carl Freeman if the memory of his own 95th birthday was a bit hazy—it happened almost a decade ago.

On Wednesday, September 11, the lifelong Latter-day Saint marked his 104th year. He’s certainly earned a season of rest and relaxation. But every Friday the centenarian climbs behind the wheel of his car and makes the short drive to the historic St. George temple. After changing into his white suit, he mans the recommend desk for a couple of hours before moving to the baptistry to perform confirmations.

“I’m independent—so I can come and go as I please,” he said. “If I have any health problems, I don’t know about it.” 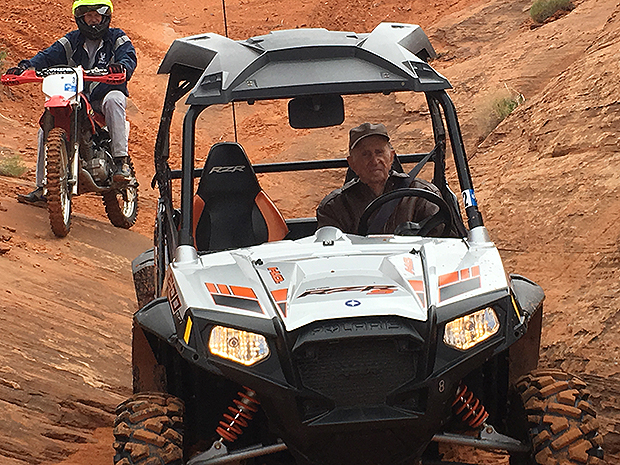 Centenarian Carl Freeman takes the wheel of an off-road vehicle during a 2018 excursion to Utah’s sand dunes. Photo courtesy of Tara Mickelsen.

Plus, he’s quick to add, serving in the St. George Utah Temple is a lot of fun.

“It’s always an enjoyable experience to be giving rather than taking. I’ve always liked volunteering. I’m not a person who likes to take, I like to give—and my experience working in the temple is a real highlight.”

Freeman believes the Lord wants him reporting for recommend desk duty every Friday.

“I really feel that the extension of my age is no accident,” he said. “You can find passages in the scriptures where the Lord extends some people’s lives so they can take care of things in this life that they can’t in the next.”

Freeman said it is also important to be an example of “service at any age” to his family and fellow temple workers—especially the youth he works with in the baptistry. Many are eager to serve alongside a gentleman old enough to be their great-great-grandfather.

“When you consider that I’m about 90 years older than most of them, they know they are experiencing something they will never do again.” 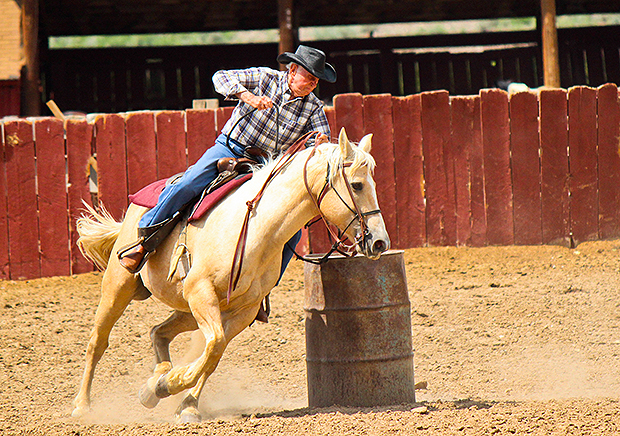 Such affection for Brother Freeman is shared by patrons of all ages at the St. George temple.

“I’ve received several cards from people at the temple telling me that I was the highlight of their visit because they appreciated the way that I treated them.”

Counted among his well-wishers is Elder Jeffrey R. Holland of the Quorum of the Twelve Apostles, who wrote Freeman a note of appreciation after recently visiting the St. George Utah Temple.

Freeman was born in 1915 in Snowflake, Utah, when President Joseph F. Smith was the president of the Church. He served in the Northern States Mission under President Bryant S. Hinckley and enjoyed a long sales career at Hayes Brothers Buick in Salt Lake City. 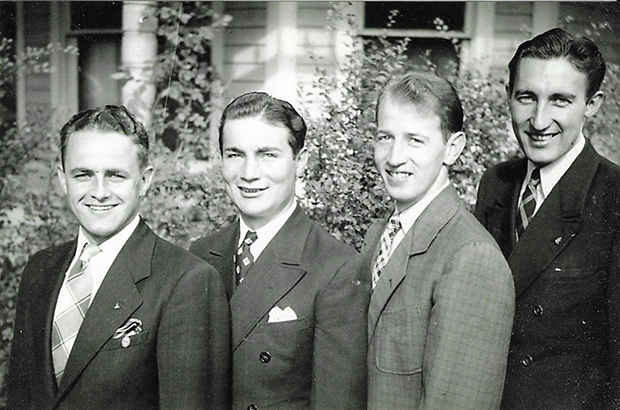 After his first marriage ended in divorce, he married a young widow named Maxine Olsen Day. Carl and Maxine were together for almost a half-century and devoted much of their life to volunteering at Utah’s Intermountain Healthcare. The two were both Church members, but were never sealed to one another.

When Maxine passed away four years ago, Freeman found comfort in temple service and scripture study, particularly the Book of Mormon. But he also experienced “a strong feeling” that he needed to be sealed to his late wife a short time after her death. The First Presidency approved the ordinance, and Freeman was sealed to Maxine with his granddaughter, Tara Mickelsen, acting as her proxy.

“It was a very sweet experience to be able to share that moment with my grandpa,” said Sister Mickelsen, a member of the Primary general board.

That temple sealing “is an awfully important part of my life with my wife,” Freeman said.

Freeman looks forward to working in the St. George temple before it’s closed in early November for extensive renovation. He’s uncertain if he’ll be able to continue serving in the temple after the St. George closure. The Cedar City Utah Temple is fairly close, but he knows the drive between his Southern Utah home and Cedar City can be treacherous in the winter.

But he plans to keep busy. Freeman still cooks his own meals, grows a garden, and regularly casts a line into a nearby fishing spot with one of his children.

Someone, of course, is always asking the 104-year-old to share his secret for a long life.

“There are two words you want to remember,” he said, “moderation and wisdom.”

“Just use a little intelligence when it comes to what and when you eat and how you live.”

And, yes, good genes always help—“if you take care of yourself.”

So does Freeman have any longevity counsel for President Nelson as the 95-year-old Church leader steps into the next decade of his service-driven life?

“I would have a hard time suggesting anything to President Nelson,” he said, chuckling. “I would simply say to him, ‘Whatever it is you’ve been doing—keep doing it. If you’ve lived to be 95, you must be doing the right thing.’” 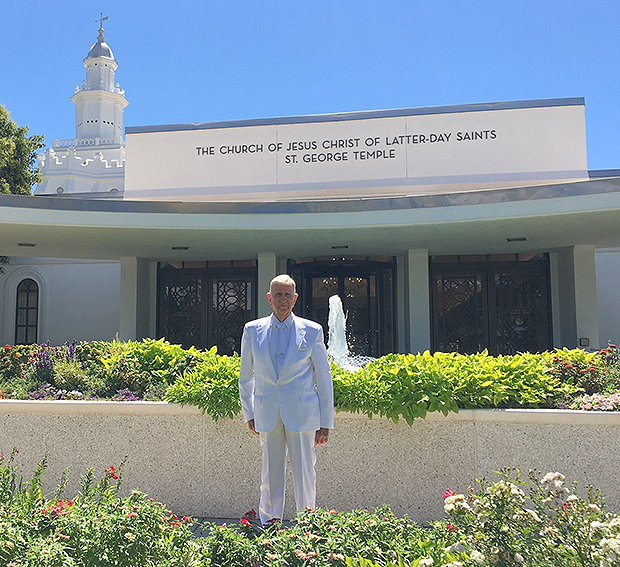 Carl Freeman, 104, stands outside the St. George Utah Temple where he work in the baptistry and at the recommend desk. Photo courtesy of Tara Mickelsen.