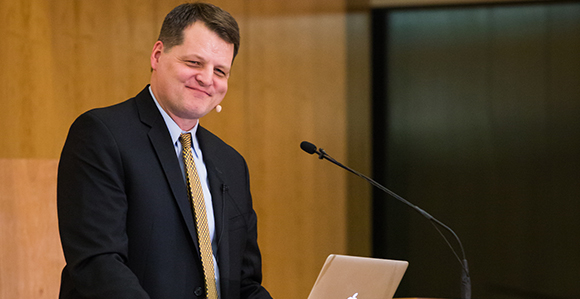 “Healthy communities are marked by care for one another. They … strive to support the spiritual needs of families in their congregation but also the emotional, practical needs of their members. That care communicates that you matter, that you belong.” —Dr. Erik Carter, Cornelius Vanderbilt professor of special education

Young people with disabilities and their families want more than to be integrated or included. “They want to experience belonging,” Dr. Erik Carter said during the 14th annual Marjorie Pay Hinckley Lecture at Brigham Young University held on February 8.

Carter is the Cornelius Vanderbilt Professor of Special Education at Vanderbilt University and was this year’s guest lecturer at the annual event. His research focuses on evidence-based strategies for children and adults with intellectual disabilities, autism, or other disabilities to find support and promote valued roles in school, work, community, and congregational settings.

Sharing his findings in research regarding young people with disabilities and their families, Carter shared “what it means to be a community marked by belonging.”

“My sense is, even though I am going to focus on those young people [with disabilities], … this is really a conversation tonight about what it means to foster belonging for anyone. So I challenge you to think about how the ideas I share today might be expressed within the communities that matter most to each of you.”

Sharing results from his multiyear research project that included nearly 500 young people with intellectual and developmental disabilities and their families, Carter offered 10 dimensions that help in fostering a sense of belonging in faith communities.

“We foster belonging not through programs but through relationships,” Carter said. “That’s how belonging comes to pass.”

And those relationships come from simple, ordinary gestures.

“These are well within our capacity to do—as a church and as the people who live in our communities,” he said.

“Belonging always begins with presence,” he said. “We cannot have a presence in a community if you are not actually present. And yet, in so many of our communities, the primary barrier to belonging is simply the absence of people with disabilities—from worship, from learning, from service, from social activities, from all the things that make up congregational life. … It is hard to feel like you are part of a community from the outside.”

Carter pointed out that communities are filled with people with disabilities. “It’s a natural part of the human condition. … There’s 60 million Americans with disabilities—that’s about 19 percent of any community. It cuts across geographic areas, it cuts across every demographic—race, ethnicity, economic status, geographic locale—and so you can maybe begin to think about what is one-fifth of the community I live in?”

Looking at the Orem-Provo area in Utah, Carter shared that of the 526,000 people living in the metropolitan area, there are about 15,000 children and adults with intellectual disability and autism who live in that community alone. He added that more than half of all people over the age of 65 have a disability.

“If we were going to leave here together and stroll through [a nearby] neighborhood and start knocking on doors, what we would find is that one of every three households that we knocked on would include a family that had a member with a disability.”

Carter shared that in most of the available data he has collected, it shows people with developmental disabilities find themselves on the outskirts of their communities.

Research shows that nearly half of the adults with intellectual disabilities who are supported on state services are not involved in any congregation at all. Just over half of the parents—56 percent—of kids with disabilities said they have kept their child with a disability home from participating in religious activity because there was not support provided.

“We learned that two-thirds of teenagers are not involved in any youth program or teen groups within their local congregation, and less than one out of five congregations are said to support children with developmental disabilities within their religious education programs, or to host support groups for families or to provide respite opportunities,” he said.

Whether it is an architectural design element of the physical building—such as inaccessible classrooms or a step that makes it difficult for a person to enter the building—or a feeling of not being welcome, all are barriers for a person with disabilities.

“What is standing in the way of people becoming present in our communities?” he asked.

For many successful families, “belonging didn’t begin with a general invitation, but a personal invitation,” he said. “When we are not intentional about personally reaching into our communities, we end up inadvertently leaving people out.”

Recognizing many congregations proclaim that they are welcoming on their website, in their church signs, and in their outreach materials, those actions are not enough.

“While that’s worthwhile to do, it is not sufficient,” he said. “We presume that that’s enough—everyone is welcome. An announcement communicates something very different than an invitation.”

Recognizing that some people experience uncertainty when they are around people with disabilities—worrying about what to say or not to say to those people—Carter said it is important to continue to reach out. It’s not always about the exact words that are said, but rather how a person feels in a situation.

“Uncertainty almost always leads to avoidance,” he said. “And when people go unacknowledged or overlooked or ignored, they stop coming eventually.”

Small acts such as greeting new families when they arrive, introducing them to others, drawing them into conversations, inviting them to other church events, involving them in smaller groups, noticing absences, and following up to know why they are gone are simple ways to reach out that are very effective.

“Those are ordinary actions that send a powerful message to families,” he said.

There is a difference between being “known about” than being “known.” Oftentimes a person with a disability is labeled by their disability, but it is more important to be known by their names, strengths, gifts, and positive qualities.

“As Christians we are called to welcome the stranger, but the stranger is not supposed to remain a stranger for very long,” Carter said.

Using the positive example of a clergy leader who is unfazed by a noise or someone speaking out while they are offering a sermon, Carter said simple acts like that make those with disabilities and their families feel accepted in the congregation.

Recognizing that how a person or family is supported is often on a personal, case-to-case basis, Carter said an effective way to know how to best support a family is to simply ask them.

“Less than half of parents that we talked to in our studies had ever been asked about the best way to include their son or daughter in religious education activities,” he said. “So that might be a starting point—ask good questions.”

“Healthy communities are marked by care for one another,” he said. “They recognize and they strive to support the spiritual needs of families in their congregation but also the emotional, practical needs of their members. That care communicates that you matter, that you belong.”

“We were meant for relationships,” Carter said.

Crucial to a person feeling a sense of belonging is friendship. For many people with disabilities, research shows their circle of friends and associates only includes family members and people who are paid to help them—such as staff and aides.

Research also shows more than half of the youth in high school with autism had not been invited to a social activity with peers even once in the previous year.

“We can’t legislate friendship; we can’t mandate friendship,” he said. “So here’s where the opportunity comes for all of us. … It’s life lived beyond the walls of our congregation that pushes people from mere acquaintances toward close friendships.”

Whether that is sharing a meal or participating in a favorite hobby, going to the mall, or watching a game together, friendship develops as a person includes another person—whatever their abilities—in those ordinary gestures.

“The great thing about this befriending is you don’t have to have any training. You don’t need a specialized degree. … We know how to befriend people, and the way you do that for people with developmental disabilities is exactly the same way.”

“It reflects a recognition that they, like everyone else, are indispensable members of the body. … Our faith community have much to gain by encountering the gifts [of] people with disabilities and their families,” he said. “When that mutuality is expressed we start to see real, deep, lasting belonging happen for families.”

“The scriptures are reminding us over and over that all we do, all we are, has to be marked by love,” he said. “Service systems … are not designed to love, but the Church is.”

The markers of fostering belonging and meaningful inclusion are the same for all people, especially in congregations of faith.

“The core needs are not what’s different, but the supports that we have to provide to support people are different.”

It is through simple actions that all in a congregation will feel welcomed and experience a sense of “belonging.” 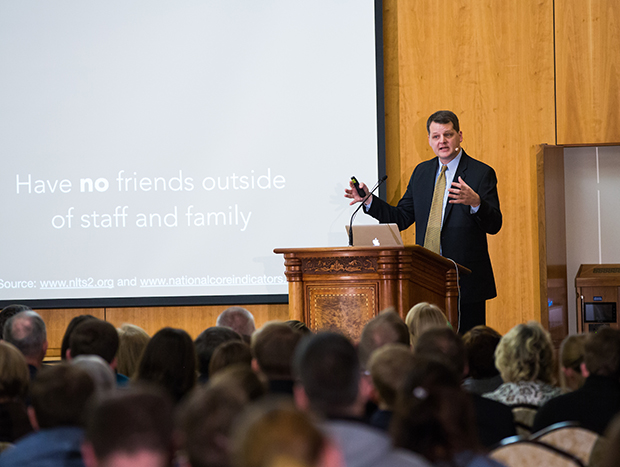 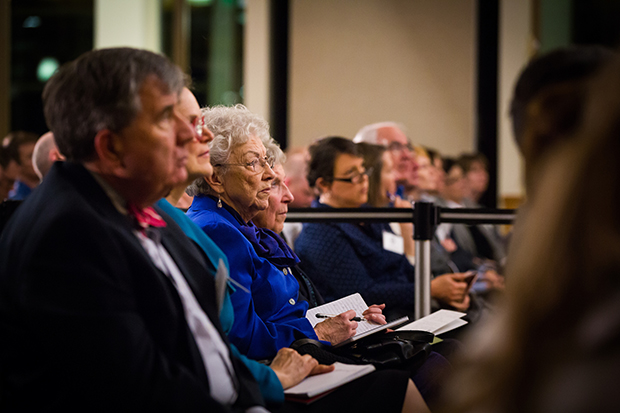