Missionaries at MTCs Celebrate Christmas Away from Home 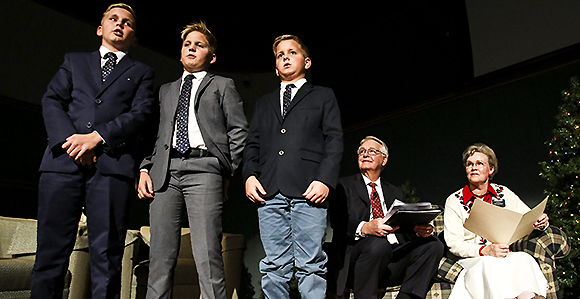 If the African proverb “it takes a village to raise a child” is true, then it must take a major metropolitan area to run the Provo Missionary Training Center with its current contingent of 1,223 new missionaries and a staff of some 100, more than 1,000 part-time teachers and workers, and another 2,000 volunteers.

And it takes considerable planning and adjustments to provide a memorable Christmas for missionaries away from home for the holidays—many for the first time—while trying to free up volunteers to spend Christmas Day with their own families.

Mindful both of missionaries being away from their families and the training center’s goal to strengthen faith and deepen conversion, President David E. LeSueur, Provo MTC president, said: “Missionary hearts are a little more tender at Christmas—we want to be very aware of and very sensitive to that fact.

“So the programs and activities have been tailor-made to bring them as much security and reassurance and feeling that while this isn’t home, it’s pretty close.”

Christmas events actually started the week before, at the Provo MTC’s weekly devotional held each Wednesday. Since Christmas fell on a Wednesday this year, the December 18 staff devotional took on a Christmas flavor with the messages and treats.

The MTC’s holiday week seemed scaled back in some regards—no senior missionary couples came for their week-long training and no young full-time elders or sisters left the MTC for their respective fields of service as they normally do Mondays through Wednesdays. Also, while Wednesday is the day for the Provo MTC and its 250 volunteers to welcome and process the weekly intake of new missionaries, no arrivals were scheduled for Christmas Day.

Travel of missionaries to and from the MTC on Christmas and the days before and after is usually avoided because of travel blackouts, higher airfare costs, overbooked flights and overcrowded airports.

Christmas Day at the Provo MTC started with a hot breakfast in the cafeteria and personal study in the missionaries’ classrooms, followed by an hour period with three options—participating in choir practice, watching Christmas video clips provided by the MTC or communicating with family.

Elder D. Todd Christofferson of the Quorum of the Twelve Apostles and his wife, Sister Kathy Christofferson, were featured in a 10 a.m. Christmas devotional—which was broadcast by satellite to all missionary training centers worldwide, with most joining to view it live. 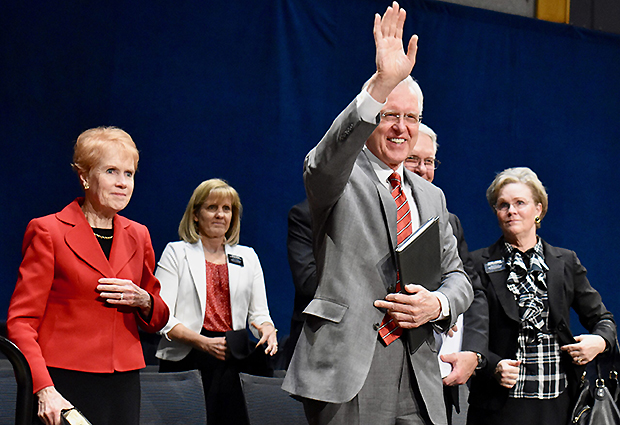 Elder D. Todd Christofferson of the Quorum of the Twelve Apostles waves to missionaries following a Christmas Day devotional at the Provo Missionary Training Center on December 25, 2019, in Provo, Utah. Photo by Scott Taylor, Deseret News.

Elder Chistofferson encouraged his listeners to use the day and their experiences as “the pioneers who will establish happy Christmas memories and traditions” for their future families.

And he also underscored the shared moment as Christ’s representatives at a special time.

“What greater privilege could we have than to find ourselves on Christmas in the service of the Savior whose birth we are celebrating,” he said. “There won’t be many Christmases when you are entitled to carry His name on your dress or shirt or jacket as His emissary, His ambassador. You are the companions of the Apostles in this work, and what an honor it is to be serving together at Christmas.”

As she related the New Testament account of Christ’s birth, Sister Christofferson likened the shepherds of Bethlehem to modern-day missionaries, since the shepherds “made known abroad the saying which was told them concerning this child.”

The missionaries had prepared for Christmas by participating in a Sunday night devotional on December 22, President George R. Rahlf, first counselor in the Provo MTC presidency, and his wife, Sister Lori Rahlf, spoke to the missionaries on the elements of the doctrine of Christ—faith, repentance, baptism, the gift of the Holy Ghost, and enduring to the end—and how they can be found in the Christmas hymns that most think only focus on the Savior’s birth.

A family-oriented program traditionally has been held on Christmas Eve for the missionaries at the Provo MTC. But this year, the evening program was moved to the afternoon of December 24 to allow the MTC to conduct its regular Tuesday night devotional with a Church general authority or officer.

And the move of the Christmas Eve program to the afternoon meant MTC teachers could break away a little earlier than on a typical December 24.

The family program was set in a family home evening setting with President LeSueur and his wife, Sister Nancy LeSueuer, telling the Nativity story to some of their grandchildren, while grandchildren of other MTC presidency members and leaders acted out the scene being told. 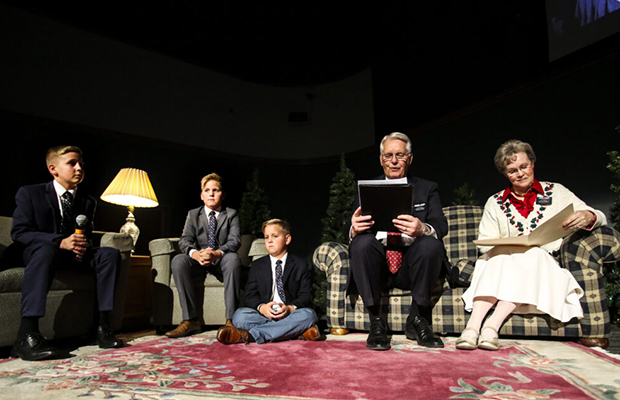 Following the devotional on Christmas day, missionaries enjoyed a Christmas meal and additional time for those who had not phoned home yet. Before leaving the cafeteria, each missionary packed his or her own sack lunch for later in the evening, freeing up kitchen and cafeteria works from having to return for an evening shift for supper.

With the recent policy change allowing missionaries to phone home on a weekly basis, missionaries at the MTC calling their families on Christmas isn’t quite the same, singular event as in past years.

Missionaries are calling by using the smartphones they’re directed to bring with them into their respective fields of service. For those who don’t take smartphones with them because of security concerns, technology limitations, or other issues, they are issued phones for use while at the MTC.

“It’s still an important call,” said President LeSueur of missionaries phoning home on Christmas Day. “It’ll be a big thing on Christmas morning, when they wake up without Mom’s hot chocolate and Christmas music in the home. So we’re anxious for them to stay connected and feel reassured.”

Later in the afternoon, the holiday movie “It’s a Wonderful Life” was showed in the auditorium, followed by time to eat the sack lunch and review individual learnings from the morning devotional as branches, zones, and district gathered in small discussion groups.

“Christmas Day opens an opportunity to focus on the Savior,” said Elder Carter Coleman of Clinton, Utah, who is learning the Hmong language for his service in the California Roseville Mission and has been in the Provo MTC for five weeks. He also attended the MTC’s Thanksgiving Day devotional with Elder Neil L. Andersen of the Quorum of the Twelve Apostles and the service project later that afternoon.

“I’m lucky because I have one Christmas in the MTC and I’ll have one in the field,” Elder Coleman added, having heard from his parents of their Christmas experiences as missionaries.

Concluding the evening was a special Christmas program and music featuring singer-songwriter David Archuleta, returned for his second such performance at the Provo MTC in as many years. Archuleta had just concluded his own Christmas Tour 2019 earlier in the week.

“This is a special time of year,” President LeSueur said. “Their hearts are more open, perhaps to messages sinking in deeper and having a greater impact. So, we’re especially grateful to have Elder Christofferson and Elder Rasband and those giving the missionaries messages that might be personally impactful to them.”

Added Sister LeSueur: “And while they might be mission out on certain family traditions, we’re hoping they’re creating memories.” 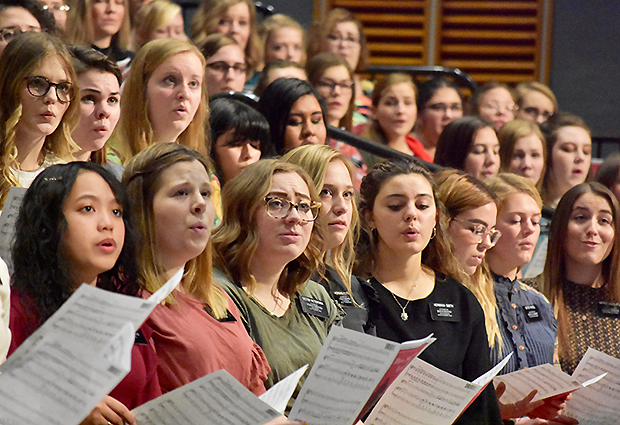 Members of the MTC choir sing during the Christmas Day devotional at the Provo Missionary Training Center on December 25, 2019, in Provo, Utah. Photo by Scott Taylor, Deseret News. 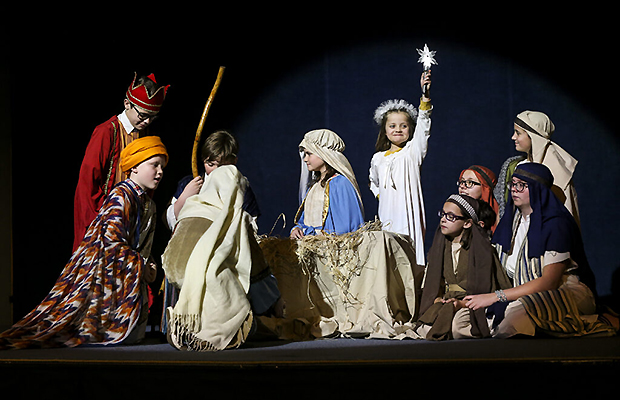 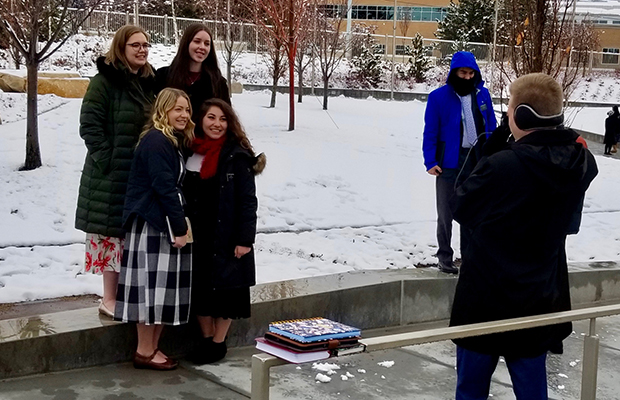 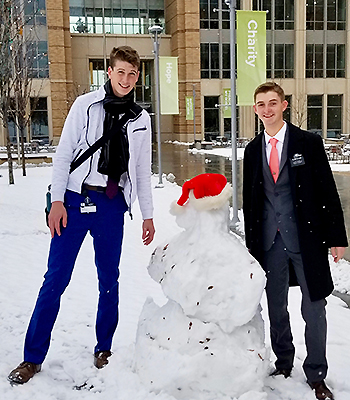 Elder Brent Poole of Brisbane, Australia,left, and Elder Cody Hunter of Lehi, Utah, pose for a Christmas Day photo with a snowman on at the Provo Missionary Training Center campus on December 25, 2019, in Provo, Utah. Photo by Scott Taylor, Deseret News.