Prior to her call as first counselor in the general presidency of the Relief Society, Silvia H. Allred served with her husband as he presided over the Missionary Training Center in the Dominican Republic.

A native of El Salvador, she and her husband served as public affairs missionaries in Madrid, Spain. She also served with her husband when he presided over the Paraguay Asuncion Mission.

Allred served as a member of the Young Women General Board. She also served as a full-time missionary in the Central American Mission.

Allred attended the University of Arizona, Brigham Young University and the General Francisco Marzan Institute in El Salvador. She has been a Spanish language instructor at the Missionary Training Center, grade school teacher, PTA president and Girl Scout leader.

She is married to Jeffrey A. Allred, and they are the parents of eight children.

The Essence of DiscipleshipApril 2011 General Conference 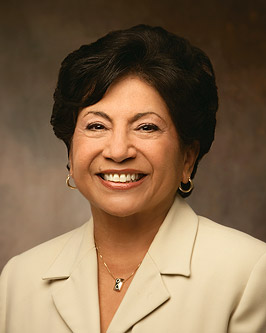