He was born November 7, 1928, in Pocatello, Idaho, a son of Kenneth Leroy and Mary Whittle Scott. At the age of 5, he moved with his parents to Washington, D.C., where his father served with the Department of Agriculture, later becoming an Assistant Secretary of Agriculture.

He graduated from George Washington University as a mechanical engineer, served a full-time mission to Uruguay, and completed post-graduate work in nuclear engineering at Oak Ridge, Tennessee. From 1953 to 1965 Elder Scott served on the immediate staff of Admiral Hyman Rickover, directing the development of nuclear fuel for a wide variety of naval and land based power plants. Elder Scott received an honorary Doctor of Christian Service degree from Brigham Young University in 2008.

From 1965 to 1969 he presided over the Argentina North Mission in Cordoba, Argentina. Upon his return, he worked as a private consultant for nuclear power companies.

He served as a regional representative in the Uruguay, Paraguay, North and South Carolina, Virginia, and Washington, D.C. areas until his call as a Seventy.

Elder Scott loves our Father in Heaven, His Beloved Son, and all of the Father's other children. Elder Scott enjoys a variety of special interests. He has a deep love for the natural beauty of the world.

He is blessed with a gifted wife, Jeanene Watkins, to whom he was sealed July 16, 1953, in the Manti Temple. She passed away May 15, 1995. They are the parents of seven children. 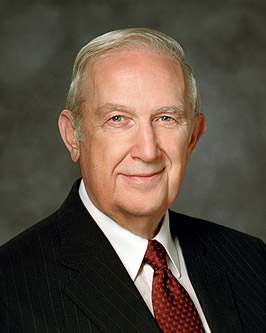