Elder Lawrence E. Corbridge was sustained as a General Authority Seventy of The Church of Jesus Christ of Latter-day Saints on April 5, 2008. He was released October 5, 2019. At the time of his call, he was serving as a Sunday School teacher. He served as President of the Chile Area, having previously served as a counselor, and served in various capacities at Church headquarters.

During his childhood and adolescent years, Elder Corbridge worked on his family’s cattle ranch in Idaho, where he learned the “cowboy way”—integrity, humility, hard work, and tenacity. He ultimately chose a career in law to help people solve problems they could not solve on their own.

He received a bachelor’s degree in finance from Brigham Young University in 1973. In 1976 he received a juris doctor degree from the J. Reuben Clark School of Law at Brigham Young University as a member of its charter class. He was a founding member of Corbridge, Baird & Christensen, a Salt Lake City law firm specializing in commercial and business law.

Lawrence Edward Corbridge was born in Moscow, Idaho, on April 6, 1949. He married Jacquelyn Gayle Shamo in December 1974. They are the parents of five sons. 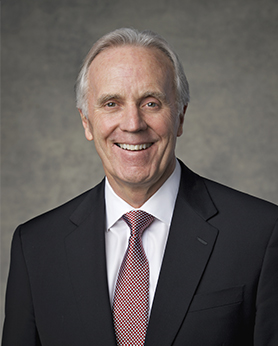