Elder L. Tom Perry, a member of the Quorum of the Twelve Apostles of The Church of Jesus Christ of Latter-day Saints, was called to his present Church position April 6, 1974, after serving as an Assistant to the Twelve since 1972.

Elder Perry’s Church service began with a mission to the Northern States in 1942, after which he served for two years with the Marines in the Pacific. Subsequent Church positions include counselor in a bishopric in Lewiston, Idaho; counselor in a stake presidency in Sacramento, California; high councilor in the New York Stake; and president of the Boston Stake.

He received his B.S. degree in finance from Utah State University in 1949 and did graduate work there. His professional career was spent in the retail business, where he served as vice president and treasurer in companies located in Idaho, California, New York, and Massachusetts.

He married Barbara Taylor Dayton on April 28, 1976, in the Salt Lake Temple. 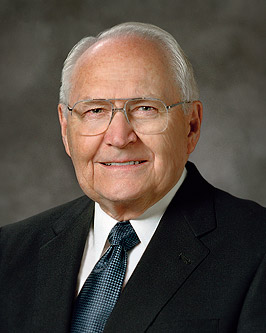