Elder D. Todd Christofferson was called to the Quorum of the Twelve Apostles of The Church of Jesus Christ of Latter-day Saints on April 5, 2008. At the time of his call, he was serving in the Presidency of the Seventy.

During his tenure in the Presidency of the Seventy, Elder Christofferson had supervisory responsibility for the North America West, Northwest, and Southeast Areas of the Church. He also served as Executive Director of the Family and Church History Department. Earlier, he was president of the Mexico South Area of the Church, resident in Mexico City.

Prior to his call to serve as a full-time General Authority of the Church, Elder Christofferson was associate general counsel of NationsBank Corporation (now Bank of America) in Charlotte, North Carolina. Previously, he was senior vice president and general counsel for Commerce Union Bank of Tennessee in Nashville where he was also active in community affairs and interfaith organizations. From 1975 to 1980, Elder Christofferson practiced law in Washington, D.C., after serving as a law clerk to U.S. District Judge John J. Sirica during the trials and other proceedings known as “Watergate” (1972-74).

Born in American Fork, Utah, he graduated from high school in New Jersey, earned his bachelor¹s degree from Brigham Young University, where he was an Edwin S. Hinckley Scholar, and his law degree from Duke University.

Among other callings, he has served the Church as a Regional Representative, stake president, and bishop. As a young man, he served as a missionary in Argentina.

The Joy of the SaintsOctober 2019 General Conference

Firm and Steadfast in the Faith of ChristOctober 2018 General Conference

The Living Bread Which Came Down from HeavenOctober 2017 General Conference

The Voice of WarningApril 2017 General Conference

“Abide in My Love”October 2016 General Conference 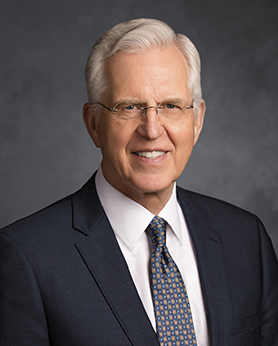