Elder Adeyinka A. Ojediran was sustained as a General Authority Seventy of The Church of Jesus Christ of Latter-day Saints on April 4, 2020, at age 52. At the time of his call, he had been serving as an Area Seventy and a member of the Third Quorum of the Seventy in the Africa West Area.

Elder Ojediran received a bachelor’s degree in botany from the University of Ilorin in 1991. He became an associate chartered accountant in 1996, and in 2000 he received a master’s degree in business administration from Ladoke Akintola University of Technology. He began his career working as a finance and administrative manager for the Quadrant Company. He then worked as head of strategic planning for Mutual Benefits Assurance PLC. Prior to his call as a General Authority, he worked as a business finance manager for Shell Nigeria.

Adeyinka Ayodeji Ojediran was born in Ibadan, Nigeria, on April 5, 1967. He married Olufunmilayo Omolola Akinbebije in 1998. They are the parents of one child.

All General Conference talks by Adeyinka A. Ojediran 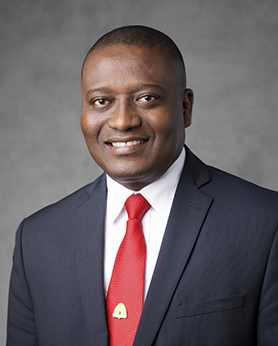