Basic Facts about the Church

Growth of the Church

According to the National Council of Churches, The Church of Jesus Christ of Latter-day Saints is the second-fastest-growing church in the United States. However, despite its increasing numbers, the Church cautions against overemphasis on growth statistics. The Church makes no statistical comparisons with other churches and makes no claim to be the fastest-growing Christian denomination despite frequent news media comments to that effect. Such comparisons rarely take account of a multiplicity of complex factors, including activity rates and death rates, the methodology used in registering or counting members, and what factors constitute membership. Growth rates also vary significantly across the world. Additionally, many other factors contribute to the strength of the Church, most especially the devotion and commitment of its members.

It took 117 years—until 1947—for the Church to grow from the initial six members to one million. Missionaries were a feature of the Church from its earliest days, fanning out to Native American lands, to Canada, and, in 1837, beyond the North American continent to England. Not long after, missionaries were working on the European continent and as far away as India and the Pacific Islands. The two-million-member mark was reached just 16 years later, in 1963, and the three-million mark in eight years more. This accelerating growth pattern has continued with about a million new members now being added every three years or less. Growth consists both of convert baptisms and natural growth through the birth of children. Church membership today is over 14 million.

More than 52,483 missionaries are serving missions for The Church of Jesus Christ of Latter-day Saints at any one time. Most are young people under the age of 25, serving in nearly 340 missions throughout the world.

Missionaries can be single men between the ages of 19 and 25, single women over the age of 21, or retired couples. Missionaries work with a companion of the same gender during their mission, with the exception of couples, who work with their spouse. The number of Church-service missionaries serving was 20,813, many of whom live at home and are called to support a variety of Church functions. Single men serve missions for two years and single women serve missions for 18 months. 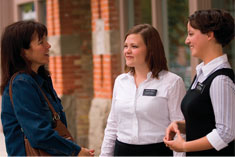 Missionary work is voluntary. Missionaries fund their own missions—except for their transportation to and from their field of labor—and are not paid for their services. Contacts with family and friends during this time of service are limited to letters and occasional phone calls to family at special times. Missionaries avoid entertainment, parties, or other activities common to this age-group as long as they are on their missions so they can focus entirely on the work of serving and of teaching others the gospel of Jesus Christ.

The sacredness of the temple anciently can be seen in both the Old and New Testaments. In the Old Testament, Moses had the children of Israel carry with them the Tabernacle (a large, portable temple) as they wandered in the wilderness. King Solomon built and dedicated the great temple that was destroyed by the Babylonians in 586 B.C. It was rebuilt and later substantially expanded, but it was again destroyed by the Romans in A.D. 70. The great Western Wall can still be seen in Jerusalem today, and even after millennia, it remains a sacred site for Jews. The New Testament gives an account of Jesus Christ clearing the temple when its sacredness was violated by people using its courts as a common market.

Temples point Latter-day Saints to Jesus Christ and their eventual life with Him, their Heavenly Father, and their family members on the condition of faithfulness to Christ’s teachings.

In a modern-day revelation, Joseph Smith received direction to build a temple in Kirtland, Ohio (dedicated in 1836). Later he was instructed to build a temple in Nauvoo, Illinois (1846). So important were temples to early Church members that within days after arriving in the Salt Lake Valley, Brigham Young selected the site of the Salt Lake Temple.

There are 166 temples throughout the world either in operation, under construction, or announced.

Organizational Structure of the Church

The Church is led by 15 Apostles. The most senior Apostle is the President of the Church, and he selects two other Apostles as counselors. These three function as the First Presidency, which is the highest governing body of the Church. Twelve others form the Quorum of the Twelve—the second-highest governing body of the Church. Together, the First Presidency and the Twelve oversee the entire Church. Church members trace this organizational structure to the New Testament.

All of the Apostles are regarded by Church members as "special witnesses" of Jesus Christ throughout the world. They travel frequently, addressing and encouraging large congregations of members and interested nonmembers and meeting with local leadership.

Leaders called Seventies—another New Testament office—assist the Twelve Apostles and serve in various locations throughout the world. There are currently eight quorums of the Seventy. Each quorum may have up to 70 members. Some Seventies are assigned to headquarters administrative functions, but most live and work within a specific geographic region of the Church.

The leader of a congregation is called a bishop. His administrative "parish" is called a ward. A group of wards forms a stake, and the leader of a stake is a stake president. "Stake" is not a term found in the New Testament but is taken from Old Testament tent imagery in which the “tent,” or church, is held up by supporting stakes. Stake presidents and bishops are the leaders most commonly encountered by the broad membership of the Church. These leaders are unsalaried and have a significant amount of local autonomy.

In March 2001, President Gordon B. Hinckley announced the creation of the Perpetual Education Fund to provide members with opportunities to gain education and training that lead to employment opportunities in their own countries. Young men and women who are living in certain areas outside of the United States may apply for the fund. The fund gives loans, with minimal interest, to the student to pay for tuition and books. After the student completes school, he or she will repay the loan over an eight-year period. Members of the Church donate money to help the fund continue.

From early in its history, The Church of Jesus Christ of Latter-day Saints encouraged its members to research their family history. In 1894 the Genealogical Society of Utah was established for that purpose. During the 20th century, extensive negotiations were conducted with governments and custodians of public records to preserve birth, marriage and death records by microfilming them. More recently, microfilming has given way to digital technology.

The Family History Library in Salt Lake City, Utah, is the largest genealogical library in the world and provides access to many collections of records, with more than two billion names of deceased people. Over 700 staff and volunteers assist patrons with family history work. Approximately 1,900 people visit the library each day.

Because genealogical records are irreplaceable, the Church has constructed a climate-controlled storage facility in Utah that houses more than 2.3 million rolls of microfilm and 180,000 sets of microfiche.

The Church of Jesus Christ of Latter-day Saints provides relief and development projects for humanitarian purposes in countries all over the world. Projects operate without regard to the nationality or religion of the recipients. Humanitarian service may include emergency response to natural disasters, such as an earthquake or a tsunami, or man-made disasters, such as the effects of war and famine. It may also be part of a longer-term effort to meet serious and more entrenched human needs, such as the need to alleviate disease.

Donations, principally from Church members but also from people around the world, are used to make relief projects possible. One hundred percent of the donations given to the Church’s humanitarian services are used for relief efforts. The Church absorbs its own overhead costs.