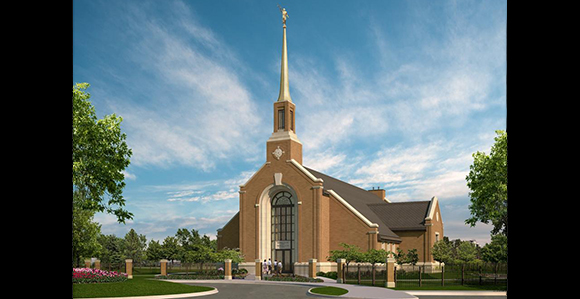 Rendering of the Winnipeg Manitoba Temple, which will be dedicated on Sunday, November 8, 2020.

The Winnipeg Manitoba Temple of The Church of Jesus Christ of Latter-day Saints will be dedicated on Sunday, November 8, 2020.

Elder Gerrit W. Gong of the Quorum of the Twelve Apostles will preside over three dedicatory sessions, at 9:00 a.m., noon, and 3:00 p.m.

Church leaders will speak at a devotional for youth ages 12–18 the evening before the temple dedication. The devotional will be held in a meetinghouse next to the temple.

This devotional and all three dedicatory sessions will be broadcast to meetinghouses in the temple district, which includes the 4,500 Church members in Manitoba’s 14 congregations. Latter-day Saints in these areas currently are assigned to either of the temple districts for the Regina Saskatchewan or Bismarck North Dakota temples.

President Thomas S. Monson announced the Winnipeg Manitoba Temple in the April 2011 general conference. Elder Larry Y. Wilson, a General Authority Seventy, presided at its groundbreaking on December 3, 2016. An open house for the public is scheduled for October 22 through October 31.

President Russell M. Nelson and other Church leaders participating in the Winnipeg stop of his August 2018 ministry in central and eastern Canada visited the temple’s construction site on August 17. At the time, the temple consisted of only ground-level concrete footings and foundation.