Performances to Begin for Savior of the World 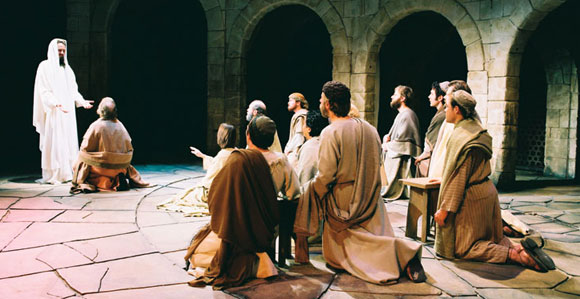 The musical drama Savior of the World, which focuses on the birth and Resurrection of Jesus Christ, is returning to the Conference Center Theater on Temple Square this Christmas season. The play features a volunteer cast of actors and singers who share their testimonies of Christ using song and dialogue.

Showings will be offered nightly, Tuesday through Saturday, at 7:30 p.m. from November 18 through December 31, with additional matinee performances at 2:00 p.m. on Saturdays.

There will be an accessible performance for those who are deaf, blind, or disabled, on Saturday, December 3, at 2:00 p.m.

Tickets for the event are available online at ChurchofJesusChrist.org/events, by phone at 801-570-0080 or toll-free at 866-LDS-TIKS, or in person at the Temple Square ticket office at Door 4 of the Conference Center.

There will be no performances on Thanksgiving Day, Christmas Eve, or from December 12 through December 17.

Savior of the World is in its 12th year of production and is known for its moving, two-act depiction of the events surrounding the Savior’s birth and His glorious Resurrection. The play is shaped around the scriptural accounts found in both the New Testament and the Book of Mormon. A unique feature of the production is the portrayal of the spirit world throughout the show. Standing atop a pillared balcony on stage, angels dressed in white robes watch the eventful scenes below. 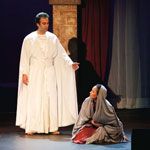 Jay Clark, producer of the event, said that the angels serve as a theatrical reminder to patrons that they are not alone.

“At the end of the play, the audience is charged to go to all the world to bear witness of Christ,” he added.