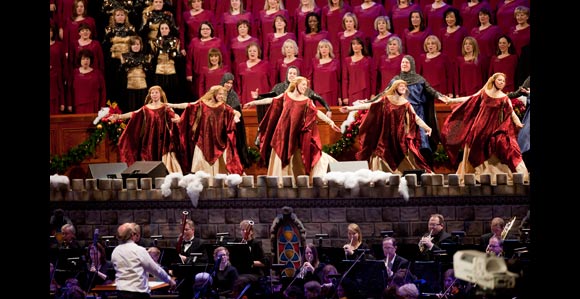 “[Christmas is] a time when we stop and reflect on the challenges we’ve had, the challenges the people around us are having, and the love that we share with one another.” —Jane Seymour, Christmas concert guest artist

On Sunday, December 18, 2011, the annual concert series, “Christmas with the Mormon Tabernacle Choir, Orchestra at Temple Square, and Bells on Temple Square” drew to a close following four Renaissance-inspired performances of music, storytelling, song, and dance.

Approximately 84,000 people attended during the four days of concerts; requests for tickets to this year’s concerts totaled more than one million.

The concerts are not broadcast or archived, but, as with last year’s concert, the 2011 Christmas Concert will be aired on PBS toward the end of next year. However, readers can watch the entirety of the last song performed during the concert, “Angels, from the Realms of Glory,” above, on Church News and Events.

“This is a way for people to know that we have testimonies of the Lord Jesus Christ, and that He is central to our thoughts at Christmas time,” general manager of the Mormon Tabernacle Choir Scott Barrick said. “It’s a way of celebrating Him and what He has given us.”

The elaborate stage design, complete with castle towers, festive banners, and glowing stained-glass windows, set the medieval mood that prevailed throughout the concerts. Dancers dressed in royal blue, gold, and red opened the concert with a processional set to “Sing Forth This Day,” composed by choir director Mack Wilberg.

“One of the reasons why this concert is so popular is because it’s filled with joy,” said Brother Wilberg, who plays a key role in shaping the annual concert’s visual and musical theme. “[We] try to portray the beauty and the joy of the season.”

British actress and special guest Jane Seymour began her narration: “‘Once upon a time’: That is how the stories of Christmas begin. ‘The Little Match Girl,’ ‘The Drummer Boy’—these are the stories that remind us no matter how things seem to be, everything is possible at Christmas. And so we begin. Once upon a time, from castles and cottages across the land, the people of the earth gather to rejoice.”

Another special guest artist, operatic baritone Nathan Gunn, lent his versatile voice to several pieces, including foreign carols “In dulci jubilo” and “Sing Lullaby,” Bach’s “Mighty Lord, and King All Glorious,” and the ever-popular “’Twas the Night before Christmas” by Ken Darby and Harry Simeone.

The Bells on Temple Square enhanced the sound of the orchestra with their addition of handbells to the music.

The program culminated with Brother Wilberg’s arrangement of “Silent Night,” performed by the choir and orchestra and featuring Mr. Gunn. Ms. Seymour followed with a reading of Luke 2, which relates the birth of Jesus Christ.

“It’s so wonderful . . . to have the opportunity to share the real meaning of Christmas with so many people, because for me Christmas is the most special time of year,” Ms. Seymour said. “It’s a time when we stop and reflect on the challenges we’ve had, the challenges the people around us are having, and the love that we share with one another.”

As in the past, the concert ended with the French carol, “Angels, from the Realms of Glory.”