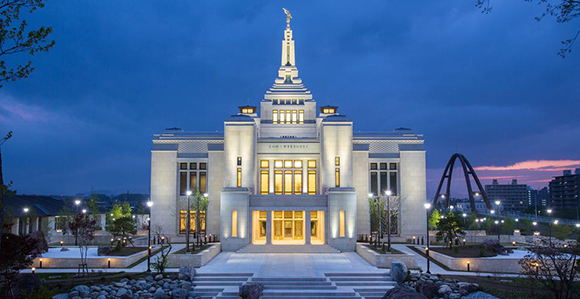 The Sapporo Japan Temple, which will be dedicated August 21, 2016.

The First Presidency of the Church has announced that the Sapporo Temple will be dedicated on Sunday, August 21, 2016, in three sessions: 9:00 a.m., noon, and 3:00 p.m. The dedication will be broadcast to Church meetinghouses in Japan. A cultural celebration will be held the night before on August 20.

President Thomas S. Monson announced the Sapporo Japan Temple at the October 2009 general conference, and ground was broken October 22, 2011. A public open house was held July 8–23. The Tokyo Japan Temple—dedicated in October 1980—was the first temple in Asia. The Fukuoka Temple was dedicated in June 2000 and became the 88th temple worldwide.

The Church, which has been in Japan since 1901, has more than 127,000 Latter-day Saints spread through 267 congregations. The Sapporo Japan Temple will serve members living within stakes on and near Japan's northernmost island of Hokkaido.

Tickets for the free open house can be reserved on tickets.ChurchofJesusChrist.org.