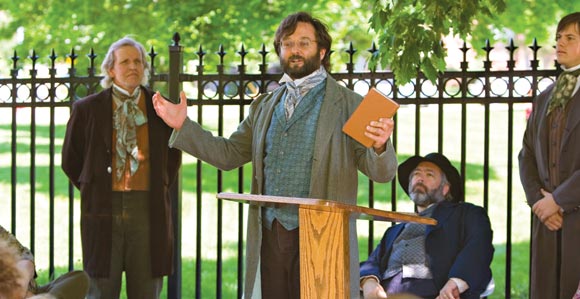 The Nauvoo Pageant celebrates the sacrifices and contributions of early Latter-day Saints in building the city of Nauvoo and the Nauvoo Temple.

Individuals of all faiths, cultures, and ages are invited to attend the Nauvoo Pageant—held from July 10 to August 4, 2012, excluding all Mondays and Sundays—to celebrate the sacrifice, faith, and courage of early Latter-day Saints who helped build the city of Nauvoo and the temple there. The pageant’s core cast—a group of 20 actors representing major historical figures such as Joseph Smith, Emma Smith, and Parley P. Pratt—together with an ensemble of 150 volunteer cast members, will pay tribute to the Prophet Joseph Smith, commemorate the building of the original Nauvoo Temple, and celebrate the themes of faith, family, and community.

Performances will begin at 8:30 p.m. every night two blocks west of the Nauvoo Illinois Temple.

Prior to the pageant each night, a frontier country fair will be held at 7:00 p.m. Guests will enjoy 20 different games and activities from the 1840s, hosted by cast members dressed in period costumes. In addition, the pageant’s core cast will present short historical vignettes during the day and an hour-long presentation every Sunday in selected venues outside Nauvoo.

All events are free of charge and do not require tickets or reservations.

For additional information, patrons can visit the pageant’s website or call the pageant office at 217-453-2429.