Scenes from the British Pageant (left) and the Nauvoo Pageant (right).

Each summer, a cast and crew of more than 1,100 volunteers bring the early history of The Church of Jesus Christ of Latter-day Saints in the United States and England to life in two musical productions—the Nauvoo Pageant and the British Pageant.

Both pageants feature scripts based on actual journals and historic records from the 1800s, as well as traditional and original music.

Guests may also enjoy historical vignettes in Old Nauvoo throughout the day and the 1840s Nauvoo Country Fair. The vignettes include a retelling of the early history of the Relief Society, readings from letters exchanged between Joseph and Emma Smith, an excerpt of the Prophet Joseph’s sermon at the funeral of his friend King Follett, and stories of the missionary experiences of some of the early Apostles of this dispensation.

At sundown you can walk the “Trail of Hope” toward the Mississippi River as pageant cast members tell pioneer accounts of leaving their beloved city of Nauvoo behind.

Before the pageant begins each night, join members of the family cast at the pageant site as they host a variety of activities for visitors, including dancing, sack racing, pulling handcarts, games, and crafts.

The Nauvoo Pageant and the British Pageant will continue to be held each year in Nauvoo. The British Pageant, under area leadership, will be held every four years in Chorley, in Lancashire, England. The next production will be in 2021.

Performed on Tuesday, Thursday, and Saturday from July 9 through August 3, the Nauvoo Pageant tells the story of the restored gospel, the prophetic mission of Joseph Smith, and the legacy of early Latter-day Saints in Nauvoo, Illinois, while celebrating universal themes of faith, family, and community. 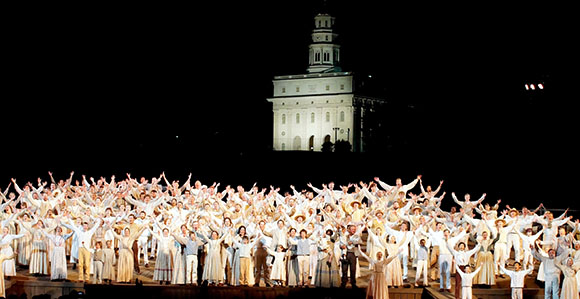 The Nauvoo Illinois Temple is highlighted during a performance of the Nauvoo Pageant. Photo by Kyle Franklin.

The British Pageant, The Truth Will Prevail, was first performed in Preston, England, and began its run in the United States in 2015. Performances are Wednesday and Friday from July 10 to August 2.

The British Pageant tells the history of early Mormonism in the British Isles, depicting the struggles and triumphs of the British Saints. The faith, devotion, and sacrifice of 19th-century British Church members helped make possible the flourishing religious community that later was established in Nauvoo.

The pageant features seekers of truth and persecuted reformers such as William Tyndale, Ann Askew, and Hugh Latimer, who did much to lay the foundation of religious freedom.

In 1837, missionaries first landed in Liverpool to open the door of salvation to the British Isles. They traveled to Preston, arriving during elections. As they descended the coach, a banner was unfurled from a window above them, proclaiming, “Truth Will Prevail.” The missionaries immediately adopted this as the motto of their mission to England. 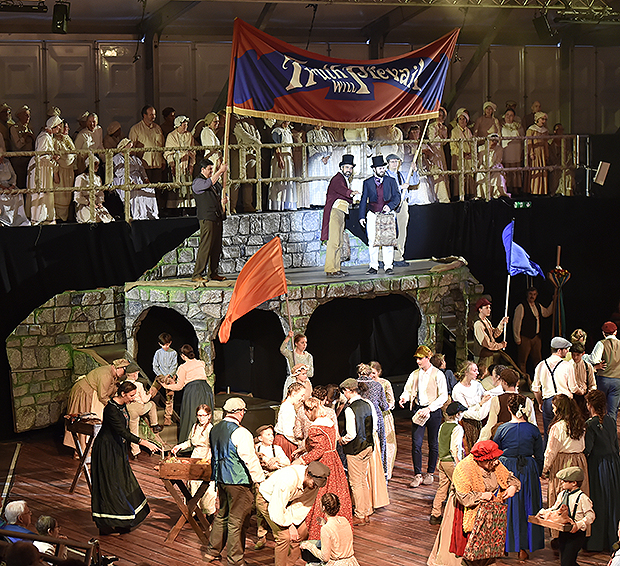