Mormon Tabernacle Choir to “Rise Above” with 9/11 Program 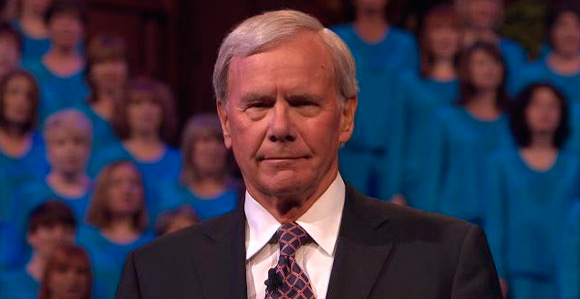 A special 9/11 memorial performance of Music and the Spoken Word by the Mormon Tabernacle Choir and Orchestra at Temple Square will be broadcast on Sunday, September 11, 2011.

The special, titled “9/11: Rising Above,” will include six songs by the choir and orchestra, as well as several interviews with individuals who have risen above the negative experiences of that day.

In a promotional video on Music and the Spoken Word’s website, he explains how “Rising Above” will present, in music and word, how that tragedy and other challenges faced by everyday Americans have bound our nation together and inspired us to lead lives of deeper understanding, appreciation, and purpose.

“As much sorrow and grief as came from 9/11, there have also come positives,” said Mack Wilberg, music director of the Mormon Tabernacle Choir. “In this program, we wanted to show how the indomitable American spirit turned a tragedy into a triumph of coming together and caring and serving. The message of this show is that as individuals and as a nation we can find healing and strength in adversity, and literally rise above all the negatives.”

The choir and orchestra were among the first to hold a memorial concert 10 years ago on the evening of September 11, 2001, when they had planned to perform for a group of financial executives gathered in Salt Lake City for a conference. That concert was quickly shifted from the prepared repertoire to a tribute to those who had lost their lives at the hands of terrorists that day

“9/11: Rising Above” will be broadcast on September 11 on approximately 750 stations and networks in the United States and Canada. A large number of these—about 160, including many NBC network affiliates—will be carrying Music and the Spoken Word for the first time. Air times and station information can be found at www.musicandthespokenword.org or by checking local listings.

Music and the Spoken Word’s originating stations, KSL TV and KSL Radio, will air the special several times on September 11, and BYU Broadcasting has planned an extensive airing schedule on its various outlets that same day: at 9:30 a.m. and 7:00 p.m. on BYUtv International, at 8:00 p.m. on KBYU Channel 11, and at noon and 7:30 p.m. on KBYU-FM Classical 89.

The special will also be streamed live at 9:30 a.m. on ksl.com and byuradio.org.

The special was pre-recorded, so Tom Brokaw will not be in the Tabernacle in person on Sunday, September 11. The live program presented that day will feature different repertoire. Viewers are encouraged to watch the 9/11 special on TV or radio. Temple Square visitors can view the special in the North Visitors’ Center Theater at 9:30 and 10:30 a.m.

Music and the Spoken Word, a weekly broadcast of musical selections by the Choir, interspersed with inspirational readings, has been carried on network radio ever since its inaugural broadcast on July 15, 1929, an unparalleled record of continuous network broadcasting. Originating from the Tabernacle on Temple Square in Salt Lake City, Utah, USA, the broadcast is carried on 2,000 radio, television, Internet, and cable networks across the country and around the world and has been inducted into the National Association of Broadcaster’s Hall of Fame and the National Radio Hall of Fame.

Read and watch an inspirational story about how members affected by the tragedy have found hope in the gospel.