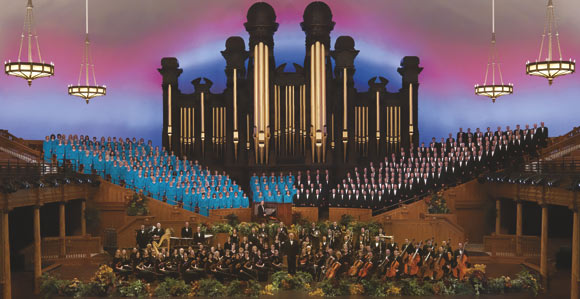 Only once every two years do the world-famous Mormon Tabernacle Choir and Orchestra at Temple Square take to the road for a summer tour.

In less than a month, the 360 voices of the Emmy and Grammy Award-winning Mormon Tabernacle Choir will kick off an eight-day, seven-performance tour that will cross Virginia, Pennsylvania, and New York, USA, and Toronto, Canada.

The Mormon Tabernacle Choir has performed before presidents, sold millions of records, won scores of awards, and enthralled audiences in more than 28 different countries. The 360 volunteer singers, ages 29 to 61, are members of The Church of Jesus Christ of Latter-day Saints.

Once every two years the choir crowds onto three planes and eleven buses and tours a section of North America with a run of performances that pack concert venues with those anxious to see “America’s Choir” perform live.

“Every week we have thousands of visitors from all over the world who come to Salt Lake City to experience the choir in person,” said Mack Wilberg, music director of the choir. “Touring gives us the chance to share this experience with new audiences around the country. It’s a great privilege and a highlight for choir and orchestra members to perform for audiences in live concerts.”

This year’s schedule includes concerts in three U.S. states and in Canada:

Tickets run from $20–$85 for the choir’s performance at this venue. Ages eight and up are welcome.

This year the choir is celebrating 100 years since its first appearance in Philadelphia. Two of the choir’s performances in this venue have received gold records, including its rendition of “The Battle Hymn of the Republic,” in 1959. Tickets range from $11.50 (lawn, child)–$75.

The choir last sang at the Chautauqua Institution in 2007. It will perform two concerts with the Orchestra at Temple Square and the Massey Memorial Organ. Tickets are $40.

The choir and orchestra will perform a varied hour-and-a-half program of sacred and secular works, including  “Guide Us, O Thou Great Jehovah,” the African-American spiritual “Rock-a-My-Soul,” and “Sunrise, Sunset” from Fiddler on the Roof. Tickets are $40–$100 (US).

Tickets for all the concerts are on sale now.

More information about the tour and tickets may be found online at mormontabernaclechoir.org and on the Mormon Tabernacle Choir Facebook page.

Church News and Events will report on the choir's travels throughout the choir’s tour—names of guest conductors, information about “Singing with the Choir,” and other details. Check back often for updates.