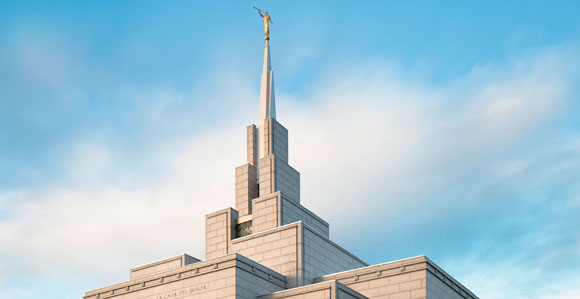 The Tegucigalpa Honduras Temple is the first temple in Honduras and the sixth temple in Central America. The First Presidency recently announced the temple will be dedicated March 17, after a public open house and youth celebration.

“Everyone, especially the youth, are so excited to have a temple. We know that this is a special opportunity to serve.” —Nelson Enamorado, president of the Tegucigalpa Honduras Guaymuras Stake

Members throughout Honduras are learning that the weeks leading up to the dedication of their country’s first temple can be grueling, joyful work.

Thousands of men, women, and youth have been enlisted to organize, perform, and serve in the various events being staged in conjunction with the fast-approaching opening of the Tegucigalpa Honduras Temple. For most, it is a once-in-a-lifetime assignment. The temple will be the first of its kind in this Central American nation—and members are eager to pitch in to ensure its success.

“Everyone, especially the youth, are so excited to have a temple,” said Nelson Enamorado, a resident of the capital who serves in the presidency of the Tegucigalpa Honduras Guaymuras Stake. “We know that this is a special opportunity to serve.”

The First Presidency recently announced that Central America’s sixth temple will be dedicated in three sessions on Sunday, March 17. It’s expected that tens of thousands of Hondurans will be able to walk the halls and lush grounds of the new temple during the open house period that is scheduled to precede the dedication. The public open house will run from February 9 through March 2, excluding Sundays.

The temple will open for ordinance work on March 19.

“The Honduran members are dedicating their time and lives for these events,” said President Enamorado. Many of the young people who are already practicing for their roles in the cultural event will also be serving at the temple open house. There they will work alongside hundreds of adults who are being trained to make the open house a spiritual, memorable event for all who visit.

The members are eager to serve because they have waited for generations for a temple in their own land, he added. It has been almost six years since the Church announced plans to build a temple here. Construction began in 2009. Many have used that time to prepare themselves to serve in the temple by participating in regular trips to the Guatemala City Guatemala Temple. Others have made improvements in their personal lives so they can be both worthy and prepared to worship and labor with their families in the Tegucigalpa edifice.

“The temple has already proven to be a blessing,” he added.

Home to more than 142,000 members and three missions, Honduras is still writing its early chapters of Church history. The first missionaries began serving here in 1952, a short time after Elder Spencer W. Kimball of the Quorum of the Twelve made an apostolic visit to the country. The first Honduran stake was organized some two decades later in 1977.

The Church has continued to grow in Honduras—even during periods of violent civil strife and natural disaster. In 1998, President Gordon B. Hinckley traveled to Honduras to offer spiritual counsel and shepherding following the massive devastation of Hurricane Mitch. The Church also provided food and other humanitarian relief in the aftermath of the catastrophe.

The temple site enjoys a prominent spot atop a hill and is visible throughout much of the capital. President Enamorado said the building has already become a beacon of hope and light for many in its shadow.