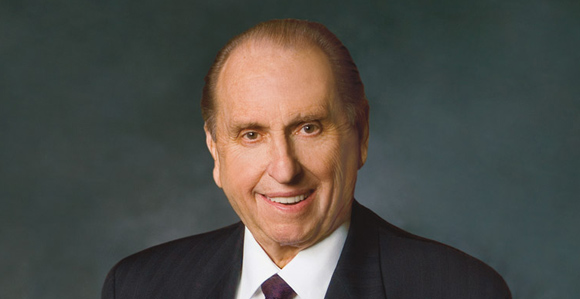 “Golden Days: A Celebration of Life” will take a nostalgic look back at President Monson’s illustrious life and decades of service.

“So many around the world have been influenced by President Monson’s warmth, compassion, and genuine love of people.” —Jane Clayson Johnson, national network news anchor and author

On Friday, August 17, 2012, at 8:00 p.m., thousands of people will gather in the Conference Center to participate in “Golden Days: A Celebration of Life,” honoring the upcoming 85th birthday of President Thomas S. Monson of The Church of Jesus Christ of Latter-day Saints.

“We are very pleased that talented solo artists will be joining the choir to honor this great man,” choir president Mac Christensen said. “I happen to know the songs being performed will delight President Monson.”

Actress and recording artist Rebecca Luker has appeared on Broadway in Mary Poppins, The Music Man, and Showboat. Distinguished American tenor Stanford Olsen, meanwhile, is one of the world's outstanding and versatile classical vocalists, whose accomplishments in opera, concert, and recital span a career of nearly 30 years at the music world's highest levels. Dallyn Vail Bayles is a professional actor, singer, and recording artist. He most recently performed with the Broadway touring company of The Phantom of the Opera, where he understudied and performed the roles of the Phantom and Raoul. Bayles portrays Hyrum Smith in the films Joseph Smith: The Prophet of the Restoration and Emma Smith: My Story.

“President Monson has served other people all of his life. I know that he’s more comfortable in that role than having any accolades focused on him,” Brother Young said. “This celebration is a great way to let him know how much he is loved and appreciated. It’s a privilege to play a small part in that recognition.”

“So many around the world have been influenced by President Monson’s warmth, compassion, and genuine love of people,” said Sister Johnson. “We celebrate and honor his extraordinary life of service and leadership.”

The evening will also take a nostalgic look back at President Monson’s illustrious life—from his childhood, marriage, and stint in the Navy during World War II to his decades of service. President Monson was called as the bishop of a congregation at age 22 and has served for nearly a half century as a General Authority of the Church.

All 21,000 tickets have been distributed for the program. Standby tickets for those without tickets will not be issued. However, patrons are invited to stand by for last-minute seating. The standby line will form at the north gate on Temple Square prior to the event.

The program will also be shown at various LDS stake centers over the Church satellite system on Saturday, August 18, with subsequent rebroadcasts to many areas of the world.

Beginning at 7:00 p.m. MDT on Saturday, August 18, the event will stream on ChurchofJesusChrist.org and be available as video-on-demand following that. Mormon Channel will also stream the event live on Saturday night.

BYUtv International will broadcast the performance in Spanish and Portuguese on Saturday, August 18, at 7:00 p.m. and Sunday, August 19, at 8:00 a.m. and 4:30 p.m. mountain daylight time.