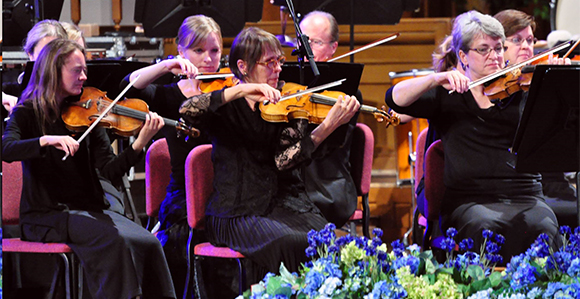 The Orchestra at Temple Square will present a fall concert Friday, October 16, and Saturday, October 17, 2015, in the Tabernacle under the baton of Igor Gruppman.

The Orchestra at Temple Square’s fall concert is always a favorite. This year’s concert, entitled “Music for the Soul,” features Kevin Kenner, considered “one of the finest American pianists to come along in years,” with conductor Igor Gruppman, well known to Tabernacle audiences.

The evening opens with Chopin's Concerto no. 2 in F Minor, op 21. The piece was composed in 1830, when Chopin was just 20 years old and before he completed his formal schooling. The three movements include an opening filled with nonstop virtuosity, a nocturne, and a finale featuring Polish folk music leading to a thrilling conclusion.

Soloist Kenner has impressive credentials, having performed with world-class orchestras including the BBC Symphony Orchestra, the Berlin Symphony Orchestra, and the Warsaw Philharmonic. In the United States he has performed with major orchestras in San Francisco, San Diego, Kansas City, New Jersey, Baltimore, St. Paul, and other cities. This will be his second appearance with the Orchestra at Temple Square.

The second half of the program features “Dance of the Blessed Spirits” from act II of Christoph Willibald Gluck's opera Orfeo ed Euridice, premiered in 1762. Mozart's Symphony no. 40 in G Minor, K. 550, concludes the concert. Written in 1788, it is one of Mozart's most admired works.