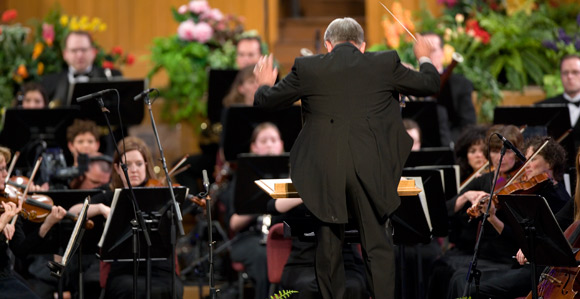 At 7:30 p.m. on Friday and Saturday, October 26–27, 2012, the Orchestra at Temple Square will perform a free fall concert, “A Night in Vienna: Music of Haydn, Strauss, and Strauss,” at the Tabernacle on Temple Square.

Tickets are required for this annual event, but they may be obtained for free beginning on September 25 by calling 801-570-0080 or visiting ChurchofJesusChrist.org/events. Tickets are limited to four per person.

Igor Gruppman will conduct the 170-member, all-volunteer, nationally recognized orchestra, which will open with Haydn’s Farewell Symphony, written in 1772 for Haydn’s patron Prince Nikolaus Esterhazy. The overture from the operetta Die Fledermaus, written by Johann Strauss Jr. over 100 years later, will complete the first half.

The second half of the concert will open with the Der Rosenkavalier Suite, a concert version of a comic opera written by Richard Strauss and first performed in 1944. The concert will finish with three pieces by Johann Strauss Jr.: “The Laughing Song” from the second act of Die Fledermaus, the jaunty and high-spirited Tritsch-Tratsch Polka, and the Emperor Waltz, a symbolic musical toast between Austrian emperor Franz Josef and German Kaiser Wilhem II.

Admission to this event is limited to those ages eight and older. Doors will open at 6:30 p.m. each evening of the event, and concertgoers should be in their seats 15 minutes before it begins. Standby seating will be available on a first-come, first-served basis.

The concert is part of a series of Temple Square performances—recitals, dramas, and other cultural arts events—most of which are available to the public free of charge.