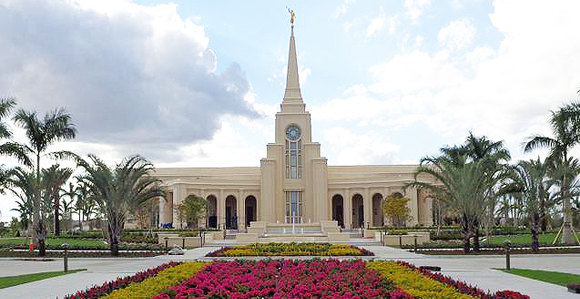 The public is invited to visit the new Fort Lauderdale Florida Temple during an open house from Saturday, March 29, through April 19, 2014, excluding Sundays.

The First Presidency has announced the dates for the Fort Lauderdale Florida Temple open house, cultural event, and dedication.

A media/VIP open house will be Wednesday through Friday, March 26-28, 2014. The public is invited to visit the temple during an open house from Saturday, March 29, through April 19, 2014, excluding Sundays (March 30, April 6, and April 13, 2014). Free reservations for the open house can be made through the fortlauderdalemormontemple.orgwebsite or on ChurchofJesusChrist.org attempleopenhouse.ChurchofJesusChrist.org/tickets in the coming weeks.

In conjunction with the dedication of the temple, there will also be a cultural event featuring music and dance on Saturday, May 3, 2014.

The temple will be formally dedicated on May 4, 2014, in three sessions. The 9:00 a.m., 12:00 noon, and 3:00 p.m. dedicatory sessions will be broadcast to all stakes and districts in Florida. To enable the Saints to participate in the temple dedication and to place appropriate focus on this sacred event, the three-hour block meetings will be cancelled that day for these units.

The temple will be open for ordinances for all patrons on Tuesday, May 6, 2014.

Plans to construct the Fort Lauderdale Temple were first announced by Church President Thomas S. Monson in October 2009. Ground was broken for the new temple on June 18, 2011. The temple will serve approximately 25,000 Church members from congregations in south Florida.

The Fort Lauderdale Temple will be the 143rd operating temple of the Church worldwide and the second in Florida. The Orlando Temple, dedicated in 1994, was the first Latter-day Saint temple built in the Sunshine State. 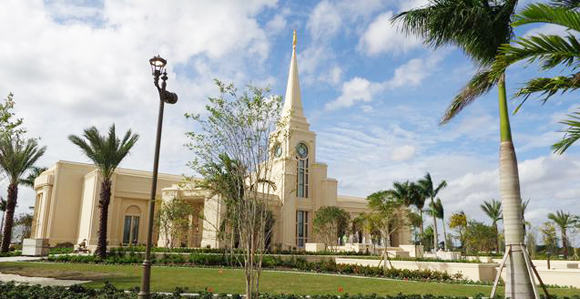