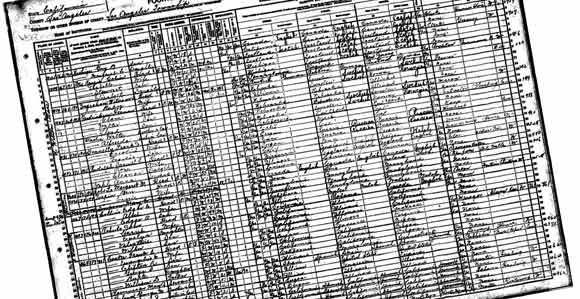 The 1940 U.S. Census differs from other censuses, including the 1910 census (pictured above), in that it is the largest, most comprehensive, and most recent record set available.

“[The 1940 census] will do more to connect living memory with historical records and families than any other collection previously made available.” —David Rencher, chief genealogy officer for FamilySearch

FamilySearch, in collaboration with other leading genealogy organizations, will begin publishing the 1940 U.S. Federal Census online for free on April 2, 2012—and tens of thousands of indexers are needed to help make the digital images searchable online.

Unlike previous census years, the 16th population census of the United States will be released by the National Archives and Records Administration in the form of free digital images. Later in the day, on April 2, FamilySearch will publish a handful of states as indexing projects to launch the campaign to index the entire census. Additional states will be added every day to the indexing queue as previous states are indexed. As states are completed, they will be published online.

By law, census records cannot be released until 72 years have passed. April 2, 2012, marks 72 years to the day since the 1940 census was taken. Census records from 1790 through 1930 are currently available on FamilySearch.org.

FamilySearch will provide those images online to tens of thousands of volunteers to start transcribing the records so they become searchable. Indexers type information from the digital images into electronic forms that make the information searchable online.

FamilySearch expects the 132 million records to be indexed by the end of 2012, but meeting that deadline depends on how many volunteers work on them.

“We’re looking for 100,000 additional indexers for this project,” said Michael Judson, FamilySearch’s indexing workforce development manager. “It’s the genealogy story of the year, and there is a lot of interest both in and out of the Church.”

The 1940 U.S. Federal Census is the largest, most comprehensive, and most recent record set available that records the names of those who were living in the United States at the time the census was taken.

Many of these individuals are part of what has been called the greatest generation—people who lived through the Great Depression, fought in World War II, and lived throughout the 48 states that existed at the time.

Tens of millions of people living in the United States in 1940 are still living today, making the 1940 census a record set that connects people with recent family records. It was the first to record such interesting facts as where people lived five years before, individuals’ highest educational level achieved, and detailed income and occupation information.

“The 1940 census is attractive to both new and experienced researchers because most people in the United States can remember a relative that was living in 1940,” said David Rencher, chief genealogy officer for FamilySearch. “It will do more to connect living memory with historical records and families than any other collection previously made available.”

Those who are interested may track the progress of indexing and publication by state by looking at the infographics at familysearch.org/1940.