Event to Celebrate 100 Years of Scouting in the Church

Watch the trailer for "A Century of Honor," a broadcast celebrating the ideals and values of Scouting.

A Century of Scouting

Watch the trailer on
scouts100.ChurchofJesusChrist.org.

In commemoration of the Church’s 100-year affiliation with the Boy Scouts of America, an event called “A Century of Honor” will be held October 29, 2013, at 7:00 p.m. Mountain Daylight Time. The event will originate at the Conference Center in Salt Lake City, Utah, and will be broadcast live throughout North America in English and Spanish. The event will be rebroadcast Oct. 29 at 9:00 p.m. and Oct. 30 at 5:00 p.m., MDT.

Featured on the program will be Scout choirs, historical vignettes, and videos highlighting important events, service, and achievements from the past century. Thousands of local Scouts of all ages will participate. Members of the First Presidency of the Church as well as national BSA leaders and executive board members are expected to attend.

All Scout troops in North America are invited to participate by viewing the broadcast live at a local LDS stake center or online during or after the broadcast at scouts100.ChurchofJesusChrist.org.

Priesthood leaders are encouraged to use the broadcast to build relationships with Scout units, families, and others in the community. Local leaders may wish to coordinate an outreach effort with the BSA leaders in their area, such as:

In 1907, Sir Robert Baden-Powell began the Boy Scout movement in England, and in 1910 the Boy Scouts of America was founded. The Church became the first sponsor of Scouting in the United States in 1913 and is now the largest sponsoring organization of BSA with more than 430,000 boys and young men enrolled.

President Thomas S. Monson, who has served on the BSA National Executive Board longer than any other member, said, “Scouting brings out the best in each of us. You've learned much from Scouting. Live what you've learned and will continue to learn.  Help others to hike the trails, to keep steadfast in the paths of truth, of honor, of duty, that all of you can soar together on eagles' wings.” (“President Thomas S. Monson Discusses Strengths of Scouting”).

In a May 2013 letter sent to stakes and wards, the First Presidency stated, “For 100 years, the Church has enjoyed a strong, rewarding relationship with the Boy Scouts of America. We are thankful for Scouting’s emphasis on duty to God and moral behavior and its positive influence in the lives of boys and young men.” 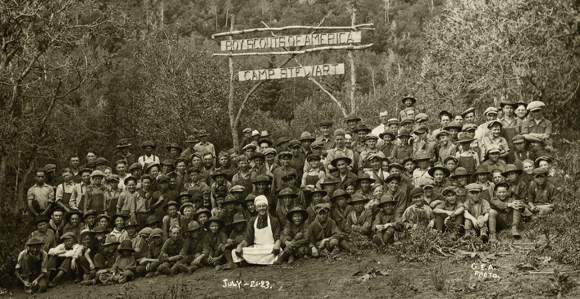 A group of Boy Scouts attend camp in the 1930s. Photo courtesy of Church History Library.