Elder Jeffrey R. Holland of the Quorum of the Twelve Apostles will address Seminaries and Institutes of Religion teachers and administrators during the CES broadcast "An Evening with a General Authority" on Friday, February 6, 2015. 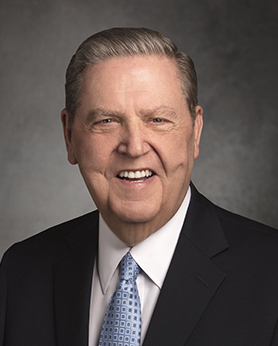 The one-hour broadcast originating from Salt Lake City, Utah, will be transmitted over the Church broadcast system and subsequently rebroadcast to many areas of the world (see below for languages, dates, and times).

Seminaries and Institutes of Religion personnel and stake seminary and institute teachers and supervisors may view the broadcast at selected meetinghouses. The broadcast may be recorded for inservice training during the school year. Stake, mission, and district presidents are encouraged to make meetinghouses available for this program as requested.

Times to view the English (closed captioned) broadcast on the Church satellite system in select meetinghouses worldwide are as follows:

Live audio and video will be broadcast online at si.ChurchofJesusChrist.org in English, French, Portuguese, and Spanish on Friday, February 27, 2015, at 6:00 p.m.

More information about the broadcast will be available at broadcastinfo.ChurchofJesusChrist.org.