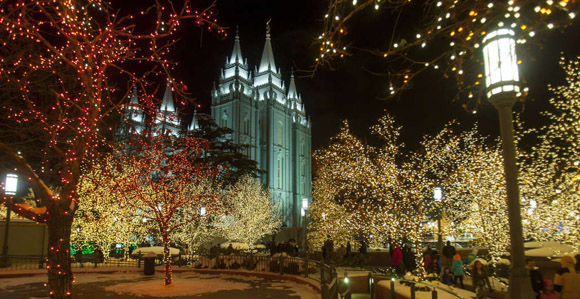 The lights on Temple Square were one attraction that attracted crowds to the EVE celebration on December 31. Events were free, family friendly, and drew thousands of attendees during the evening. Photos by Scott G Winterton.

“The quality of the performances I would say this year were outstanding.” —Marilyn Lorensen, program administrator for Temple Square Performances

The EVE celebration on Temple Square drew crowds as thousands gathered for performances in the Tabernacle and Joseph Smith Memorial Building on December 31. People poured in from the cold, bundled in coats yet still wearing their “Happy New Year” headbands, to attend music and dance events throughout the evening.

“The quality of the performances I would say this year were outstanding,” said Marilyn Lorensen, program administrator for Temple Square Performances.

After the concert, many people told Sister Lorensen that the performances were the best they had heard.

On New Year’s Eve, the sound of music filled the air outside the Tabernacle. Professional singers graced the stage and belted out Broadway tunes, jazz pieces, Celtic music, and the like as audiences bobbed their heads, tapped their feet, clapped, and cheered.

Across Temple Square, in the Joseph Smith Memorial Building, curious families filled the lobby or looked down from the second floor to watch Polynesian dancers pound out rhythms and tell stories with their dances.

Children played with wooden slats and colored pictures in the FamilySearch Center, where an indexing competition and historical scavenger hunt took place.

Teens paused and placed their scavenger hunt papers on the wall to check off items on their list. In one corner families lined up to get their photos taken on makeshift crates, barrels, and coils of rope—props representing Ellis Island.

For many, this celebration is a refuge from the cold and from the world.

Lynn Smart and Eric Conley, from Saginaw, Michigan, came to Temple Square to see the lights. When they heard music coming from the Tabernacle, they peeked in to see what was going on and were drawn into the performances. They enjoyed the “happy energy” present at the venues and were pleasantly surprised with the wholesome environment the EVE celebration provided, particularly the activities at the FamilySearch Center. 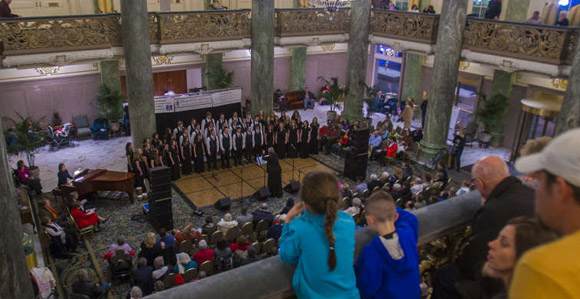 Families gather on the second floor of the Joseph Smith Memorial Building to watch a choral performance during EVE on December 31. Events were free, family friendly, and drew thousands of attendees during the evening.

The programs are selected so attendees have a wide variety of family-friendly performances from which to choose, Sister Lorensen said, and all the events offered as part of the EVE celebration were free to the public.

“[EVE] draws people who have so many different musical interests, so we try to have something that will fit almost anybody.”

The acts earlier in the evening were geared toward younger children and older adults, and as the evening progressed, tunes and performances became more suited for young adult audiences.

New Year’s Eve is often a time when a review of the past year and years prior cause many to wax nostalgic.

Because of this, swing, barber shop, and folk bands tend to be well attended.

“Our goal is really to have some wholesome music where families can come and they don’t have to worry about what their families are going to hear or see,” Sister Lorensen said.

Performers come on a volunteer basis and are required to submit a list of music, songs, and lyrics for review to ensure the presentation is appropriate for families.

Ted and Eliza Arnoldus brought their three children to come see the events Monday evening. They have been coming to this event for years, and for good reason.

“I wanted something that was fun to do that we could involve the whole family,” Brother Arnoldus said.