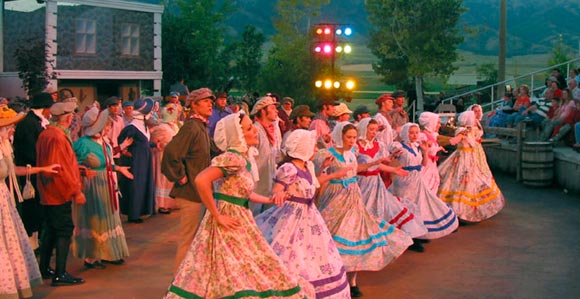 More than 100 cast and crew combine in odd-numbered years to put on the Clarkston, Utah pageant, the story of Martin Harris: The Man Who Knew.

“We see the Lord forgive Martin, and he sees the plates, touches them, feels them, because he relied on the Atonement of Christ to repent. We hope the audience will understand it a little better seeing it happen in another’s life.” —Ronda Bickmore, pageant director

Every other year, including this year, the Clarkston Pageant recounts the life and testimony of Martin Harris, one of the Three Witnesses of the origin and authenticity of the Book of Mormon: Another Testament of Jesus Christ.

On July 29–30 and August 2–6, 9–13, 2011, Martin Harris: The Man Who Knew will once again take viewers back to Utah in the 1800s as they follow Martin Harris’s journey of trial and triumph as he bears witness of the truth of the Book of Mormon.

As the sun goes down, pageant-goers settle into the Martin Harris Memorial Amphitheater, near the Clarkston Cemetery, the final resting place of Martin Harris. The 2,500 seats fill up quickly.

This year a new stage and new backdrops, along with the final version of a script and music that has been rewritten over the last few years, will bring an added measure of anticipation as the lights come on and the stars come out.

Jeff Richins, who has played the role of Martin Harris since 2006, said he wants visitors to come away from the pageant with a deeper understanding of what the Church is all about.

“It is my hope that anyone who comes to the pageant is able to feel the passion we have for this message and the knowledge that God does speak today through a prophet, and that anyone who will read the Book of Mormon can know of its truthfulness,” he said.

The pageant was first produced by Duane Huff and Denzel Clark at the request of Valdo Benson, brother of Ezra Taft Benson, former U.S. Secretary of Agriculture and former Church President. The original writer, Rhett James, did a tremendous amount of research in the scriptures and historical documents and only included information backed up by multiple sources.

“As a result,” said Don Jeppesen, pageant president, “it’s a pageant that doctrinally is very correct.”

Combine that with a cast of 85 who are dedicated to the production (about 70 percent return each year) and an equally diligent crew, and it’s easy to see why recognition of the Clarkston pageant, only 25 years old, is growing.

But that’s not the most important thing, director Ronda Bickmore emphasized.

The Martin Harris Memorial Amphitheater is located at 11000 North 8400 West, adjacent to the Clarkston Cemetery.

For more information on the Clarkston Pageant see  martinharrispageant.org.