Christmas with the Mormon Tabernacle Choir and Orchestra at Temple Square 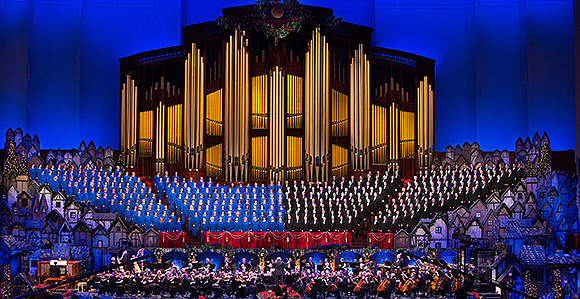 The Mormon Tabernacle Choir, the Orchestra at Temple Square, and the Bells on Temple Square perform at the annual Christmas concert in the Conference Center. Register for tickets for the 2014 show beginning Saturday, October 18, at 12:01 a.m.

Broadway star Santino Fontana will join the Mormon Tabernacle Choir and Orchestra at Temple Square for their annual Christmas concerts on December 11, 12, and 13 in the Conference Center in Salt Lake City. Taking the stage with Santino, and in a first for the choir, the beloved Sesame Street Muppets™ will join in bringing the holiday spirit to audiences young and old.

The guest artists will also appear with the choir and orchestra on the weekly Music and the Spoken Word broadcast and a mini-concert the following Sunday, December 14.

Santino Fontana, who performed during this past summer's Pioneer Day concert, is known by many for his recent roles playing Prince Hans in Disney’s hit movie Frozen and his Broadway performance as Prince Topher in Rodgers and Hammerstein’s Cinderella, which garnered him a Tony Award nomination. He also received the 2010 Drama Desk Award for his role in Brighton Beach Memoirs and received accolades for originating the role of Tony in the Broadway production of Billy Elliot.

Fontana said, “I'm thrilled to get to sing with the amazing Mack Wilberg and the Mormon Tabernacle Choir again and to share the stage with my childhood heroes.”

“This year’s concert is going to be unlike any other,” said Ron Jarrett, president of the Mormon Tabernacle Choir. “Joining Santino’s talents with the residents of Sesame Street will bring the childlike wonder of Christmas into our hearts and remind us of the true meaning of the season.”

The carefully guarded announcement was made by Elmo himself, but exactly which of his friends will be joining him and the choir will be revealed weekly on www.mormontablernaclechoir.org. “Everyone has their favorite Sesame Street character,” said Jarrett. “And many of them will be participating in the concert. We recognize that the impact Sesame Street has had on many of our lives as young children is incalculable.”

Sesame Workshop is the nonprofit educational organization behind Sesame Street, which reaches 156 million children across more than 150 countries with lessons that help them grow smarter, stronger, and kinder.

“Music has been a part of the fabric of Sesame Street since the very beginning,” said Carol-Lynn Parente, senior vice president of content and executive producer of Sesame Street. “We are thrilled to be a part of this annual PBS holiday tradition and excited to sing with the world-renowned choir.”

The free Christmas concert performances are arguably the hottest tickets in town, and because Sesame Street is joining the show, seating this year is available for those five years of age or older. “We are always delighted by the response of the community to these concerts,” said music director Mack Wilberg. “It’s the reason why we make this extraordinary event available year after year.”

Not all registrations will be selected to receive tickets, and only one registration per household can be accepted. The maximum number of tickets that a household may request is four. Tickets will be mailed to those selected shortly after the registration process closes. Once the random selection process is completed, all individuals who submitted a request will be notified by email whether or not they were selected to receive tickets. Those who register multiple times for the same household may have their registrations canceled and therefore may not receive an email notifying them if they were selected for tickets or not.