“Celebrate with Joy” at Annual Bells on Temple Square Concert 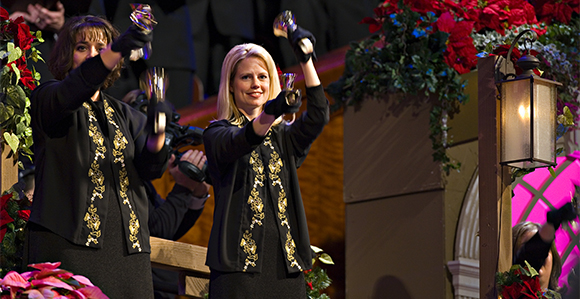 Ring in the 2015 holiday season with the annual concert of the Bells on Temple Square, “Celebrate with Joy.”

“The music will be a mix of Thanksgiving and Christmas,” explains LeAnna Willmore, conductor of the 33-member ensemble. “The audience will recognize and delight in every piece.” Included in the program will be “On This Day the Earth Shall Ring,” “Come, Ye Children of the Lord,” “Go Tell It on the Mountain,” and a piece based on music from Tchaikovsky’s Nutcracker Suite. Bell arrangements of “Silent Night” and “God Rest Ye Merry, Gentlemen,” as well as Christmas folk arrangements from the West Indies, Ukraine, and Puerto Rico, will be featured. The music for the evening will include performances by a harpist, violinist, cellist, and percussionists, as well as organ solos by Linda Margetts and Bonnie Goodliffe.

This year marks the Bells on Temple Square’s 10th anniversary as part of the Mormon Tabernacle Choir family. Willmore, who has been with the bell choir since its beginning, first as associate conductor and now as conductor, says of the bell choir’s growth in that decade, “They have become a tighter musical ensemble; they play more as a team, more like one person rather than 33 separate performers.”

Watch this video from their June 2015 concert.