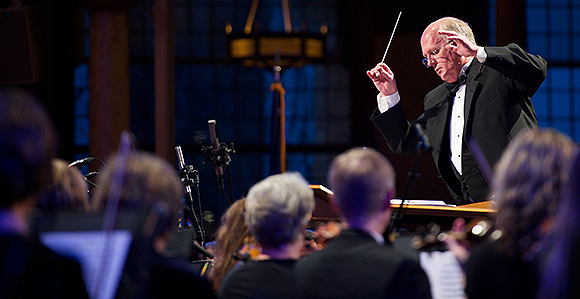 Begin your Easter celebrations by participating in a live stream or satellite broadcast of the Mormon Tabernacle Choir and Orchestra at Temple Square performing Handel’s beloved oratorio, Messiah.

Wherever you are in the world, you’re invited to sing Messiah along with the choir and orchestra and world-class soloists. For a more immersive experience, download a PDF of the musical score and the concert program with libretto from the choir’s website.

Community and church organizations may wish to plan to sing Messiah as a group activity using any of the options below. According to Ron Jarrett, the choir’s president, “This is a wonderful way to celebrate the birth, life, death, and Resurrection of Christ with all Christians of the world.” 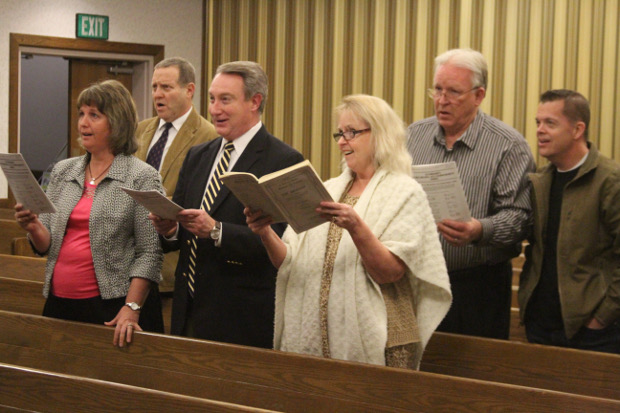 Members of the Draper Utah Crescent View Stake sing the “Hallelujah” chorus along with the internet transmission of the Mormon Tabernacle Choir and Orchestra at Temple Square performance in 2016. Photo by R. Scott Lloyd.

Watch the concert via the Church satellite system, on ChurchofJesusChrist.org,mormontabernaclechoir.org/messiah, or the Mormon Channel, on Friday, March 23, at 7:30 p.m. (mountain daylight time).

The concert will also be broadcast every three hours over the Church satellite system in English, French, German, Spanish, and Portuguese. Multiple satellite air times will be available to accommodate local needs.

Stake technology specialists should refer to the broadcast schedule before the event.

The live stream will be available from the choir’s website during the Easter season (through Monday, April 9) to accommodate time zones and schedules. Recordings of the broadcast on various channels will not be downloadable but rebroadcasts and on-demand viewing will enable individuals, families, and Church groups to organize their own Messiah sing-alongs.

Experience Messiah with the Choir on Temple Square

Although all of the tickets for Temple Square locations have been distributed, there are still ways to enjoy Messiah.

On Wednesday, March 21, at 6:30 p.m. the public is welcome to attend the choir and orchestra’s dress rehearsal held in the Salt Lake Tabernacle. Admission is open to everyone eight years of age and older. No tickets are required.

Patrons without tickets may join the standby line each evening that will form at the flagpole north of the Tabernacle. Many people in standby may be seated in one of the three Temple Square locations: Salt Lake Tabernacle where the performance will be live; the Joseph Smith Building Legacy Theatre with premium sound simulcast; and the Conference Center Theatre with closed-circuit simulcast. (Please note: Temple Square performances will be concert presentations only. See Messiah sing-along information for details about singalong locations.)

Making her debut performance with the Choir, Amanda Woodbury was the 2014 Grand Final Winner of the Metropolitan Opera National Council Auditions, where she has performed six times. She is an alumna of LA Opera’s Domingo-Colburn-Stein Young Artist program. She earned second-place and audience choice awards in Plácido Domingo’s prestigious Operalia competition.

A native of Sandy, Utah, Tamara Mumford is a graduate of the Metropolitan Opera’s Lindemann Young Artist Development Program. Tamara made her debut there as Laura in Verdi’s Luisa Miller and since then has appeared in over 150 Metropolitan Opera performances. Tamara appeared in the Choir’s 2015 Christmas concerts and the subsequent PBS special and CD and DVD recordings, performing selections from Handel’s Messiah, and was the mezzo-soprano soloist on the Choir’s landmark Messiah recording released in 2016.

Making his debut with the Choir, Tyler Nelson is one of America’s most promising young tenors. Tyler has performed with the Utah Symphony/Utah Opera, New Orleans Opera, Dayton Opera, and has been a soloist on the stages of the Kennedy Center and at Carnegie Hall. He appeared previously with the Temple Square Chorale and Orchestra at Temple Square in Mozart’s Requiem.

Tyler Simpson has sung on opera and concert stages around the world, including six consecutive seasons at the Metropolitan Opera, where he debuted in Verdi’s Don Carlo and performed in 18 productions. He appeared in the choir’s 2015 Christmas concerts and the subsequent PBS special and CD and DVD recordings, performing selections from Handel’s Messiah. 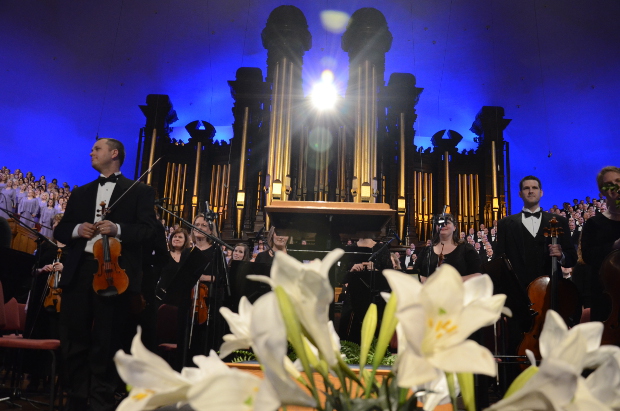 The Mormon Tabernacle Choir and Orchestra at Temple Square stand to acknowledge applause after part 1 of their performance of Handel’s Messiah at the Salt Lake Tabernacle on March 24, 2016. Photo by Debra Gehris.